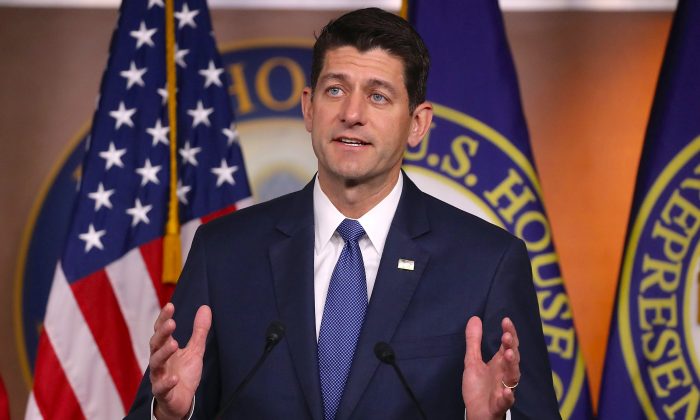 In one of House Speaker Paul Ryan’s (R-Wis.) last televised interviews before stepping down in January, he took a moment to address what he called California’s “bizarre” election results.

Ryan said on Nov. 29 he saw a significant change from the results of absentee ballots and election day voting, versus later results after the other ballots are counted.

“When you have candidates that win the absentee ballot vote, win the day of the vote, and then lose three weeks later because of provisionals that’s really bizarre. And so I just think that that’s a very, very strange outcome,” he said at a Washington Post event.

Paul Ryan: "California just defies logic to me… We were only down 26 seats the night of the election & 3 weeks later, we lost basically every contested CA race. This election system they have – I can’t begin to understand what ‘ballot harvesting’ is." https://t.co/usf6KWIfDb pic.twitter.com/LcnmVqkMaO

Ryan also said he couldn’t “begin to understand what ballot harvesting is.”

The practice of “ballot harvesting” was used for the first time this year in California. It began with the passage of AB1921, which the governor signed into law in 2016.

Previously, only relatives or household members were allowed to return vote by mail ballots for those who were unable to do so. The new law allows anyone to gather, or “harvest” the ballots, and return them for other people.

California also now allows extended and same-day voter registration at certain locations, and the ballots are not processed until the county elections office verifies each voters’ registration. This contributed to the time needed for the state’s ballot-counting process, leaving a whopping five million ballots, or more than 40 percent, to be counted after Nov. 6, according to The Associated Press.

“It defies logic to me,” Ryan said. “We had a lot of wins that night … and three weeks later we lost basically every contested California race.”

However, California Secretary of State Alex Padilla (D) expressed a very different view in response to Ryan’s comments on Nov. 29.

“It shouldn’t ‘defy logic’ that elections officials are meticulous in counting every eligible ballot. California works to ensure every ballot is counted properly and every ballot is accounted for. In the most populous state in the nation—and the state with the largest number of registered voters—this takes time,” he said.

Ryan was not the only individual to address election concerns recently. The Election Integrity Project California (EIPCa), a group of nonpartisan volunteers, said in press release on Nov. 26 it found “troubling inconsistencies” between posted election results and official voting records for the state’s June primary in the four counties it studied.

The group also claimed it found dramatic decreases in the number of poll ballots and dramatic increases in the number of mail ballots. In Los Angeles County, the official June 29 results said 825,427 people voted at the polls, while VoteCal records on Oct. 17 showed only 669,448 people, representing a decrease of 155,979. Meanwhile, official results showed 665,075 people mailed in their ballots, while VoteCal showed 798,753, an increase of 133,678.

The group said the large shifts between numbers of poll ballots and mail ballots is “inexplicable.” In addition, the group found nearly 100,000 June primary voters in Los Angeles County were listed as voting at the polls in the county data, but listed as using mail-in ballots in the state data.

“In today’s heated political environment, voters’ confidence in elections is being shaken across the country, and especially in California,” EIPCa president Linda Paine said in a statement.

“Inconsistencies in the reporting of votes makes it impossible for citizen groups like EIPCa to independently validate the results of elections. California voters deserve to know that their votes are accurately counted and accounted for. EIPCa will continue to seek answers.”