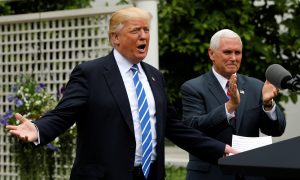 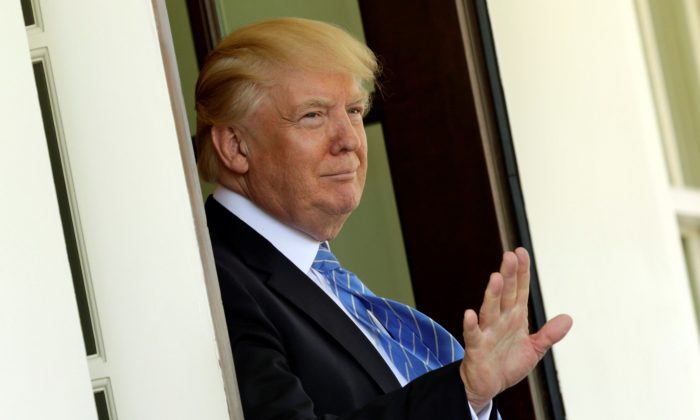 President Donald Trump gestures to the media after Palestinian President Mahmoud Abbas left the White House in Washington on May 3, 2017. (REUTERS/Yuri Gripas)
Politics

The House of Representatives was set on Thursday for a cliffhanger vote to repeal Obamacare, as Republican leaders worked to deliver President Donald Trump a win for one of his top legislative priorities.

House Republican leaders have expressed confidence the bill would pass and several party moderates who previously objected to the measure got behind it on Wednesday, giving it new momentum.

“We’re optimistic that we’ll pass it out of the House today,” Representative Mark Meadows of North Carolina, chairman of the conservative Freedom Caucus, told MSNBC’s “Morning Joe” program on Thursday.

The vote, which a House Republican aide said was due this afternoon, was expected to be close. Even if the measure passes the House, it faces daunting odds in the Senate where Republicans hold a narrower majority.

“Today is the next step in what is likely to be a very long process,” Republican Representative Michael Burgess of Texas also said on MSNBC.

Keen to score his first major legislative victory since taking office in January, Trump threw his own political capital behind the bill, meeting Burgess and other lawmakers and calling them in an effort to win their support.

Trump, whose Republican party controls both the House and Senate, is seeking to make good on his campaign promise to repeal and replace Obamacare.

But the skeptical Republican lawmakers got behind the bill after meeting with Trump to float a compromise proposal expected to face unanimous Democratic opposition.

The legislation’s prospects brightened after members of the Freedom Caucus, a faction of conservative House lawmakers who played a key role in derailing the original version last month, said they could go along with the compromise.

Millions more Americans got healthcare coverage under Obamacare, but Republicans have long attacked it, seeing it as government overreach and complaining that it drives up costs.

Called the American Health Care Act, the Republican bill would repeal most Obamacare taxes, including a penalty for not buying health insurance. It would slash funding for Medicaid, the program that provides insurance for the poor, and roll back much of Medicaid’s expansion.

Earlier this week, prospects for the legislation appeared grim as several influential moderate Republicans said they could not support the bill, citing concerns about people with pre-existing conditions.

House Energy and Commerce Committee Chairman Representative Greg Walden of Oregon on Thursday defended the leaders’ plan to vote on the bill without a new Congressional Budget Office analysis of the costs or impact on coverage, factoring in the recent changes.

“Obviously, it’s a work in progress,” Walden, who also met with Trump on Wednesday, said in a separate MSNBC interview.

House Democrats have rejected the latest change to the Republican legislation, saying it did not go far enough toward protecting people with pre-existing conditions.

“Republicans have made Trumpcare even more dangerous and destructive than the last time they brought it to the floor,” Democratic Leader Nancy Pelosi said to her caucus in a letter late Wednesday night.

Democrats have long thought their best chance of stopping the repeal would be in the Senate, where only a few Republicans would need to defect to stop the law from moving forward.

Republican Meadows told MSNBC he expected the Senate to make changes to the bill that would improve it. The bill would then face a final vote in the House.

With the difficulties in the House, Democrats are optimistic Republicans will face a backlash from voters and could lose seats in the 2018 mid-term elections.