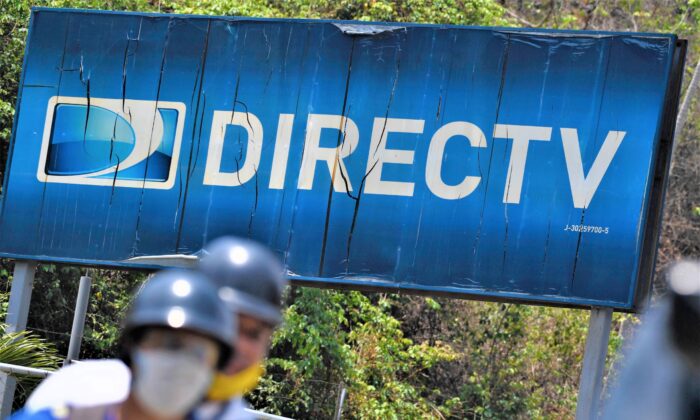 View of DirecTV broadcast satellite service provider logo at its headquarters in Caracas on May 19, 2020. (Federico Parra/AFP via Getty Images)
By Bill Pan

Republican members of Congress are calling on DirecTV to not drop the conservative news network Newsmax from its channel lineup as the satellite provider did to One America News (OAN) last year.

Rep. Wesley Hunt (R-Texas), along with 41 Republican colleagues, said in a letter that there are reasons to believe DirecTV is “moving to de-platform Newsmax by denying it cable fees on a fair and equitable basis.”

Specifically, the lawmakers cited the cancellation of OAN, a decision that came about a year after Democratic members of the House Energy and Commerce Committee specifically asked providers whether they planned to continue carrying programming for Fox News, OAN, and Newsmax—conservative networks Democrats deemed “misinformation rumor mills and conspiracy theory hotbeds that produce content that leads to real harm.”

“Given the jurisdiction of the energy and commerce committee over your companies’ business interests, it is reasonable to assume you took this letter seriously and complied with these demands,” the lawmaker said in the Jan. 20 letter to DirecTV and its corporate owners, AT&T and TPG Capital.

The Republicans also noted that DirecTV carries 11 liberal outlets including Vice, saying that Vice charges a higher fee from DirecTV than Newsmax is asking despite lower ratings and a smaller viewership.

“If Newsmax is removed from DirecTV, in less than a year House Republicans will have lost two of the three cable news channels that reach conservative voters on a platform that primarily serves conservative-leaning areas of the country,” they said.

The lawmakers also requested that DirecTV provide information including the ratings for each of the networks mentioned in the letter, with comparative data on all the other networks that are carried by DirecTV, and the corresponding fees paid to these networks.

Newsmax and DirecTV reportedly have been in talks over a deal to keep the channel on the platform. If the two sides cannot reach an agreement by the end of Tuesday, the channel may no longer be available to millions of subscribers.

In defense of not wanting to pay a fee to broadcast Newsmax, DirecTV said that Newsmax has been streaming its programs on other platforms for free.

“We’ve discussed with Newsmax on several occasions that we’d like to offer their programming, however, the network is now seeking significant fees that we cannot pass on to our broad customer base,” the company said in a statement. “Additionally, the same programming offered by Newsmax today is already available at no charge to 100 percent of U.S. households including our customers via NewsmaxTV.com, YouTube.com and on multiple streaming platforms like Amazon Fire TV, Roku and Google Play.”

Newsmax didn’t respond to a request for comment on the negotiation.