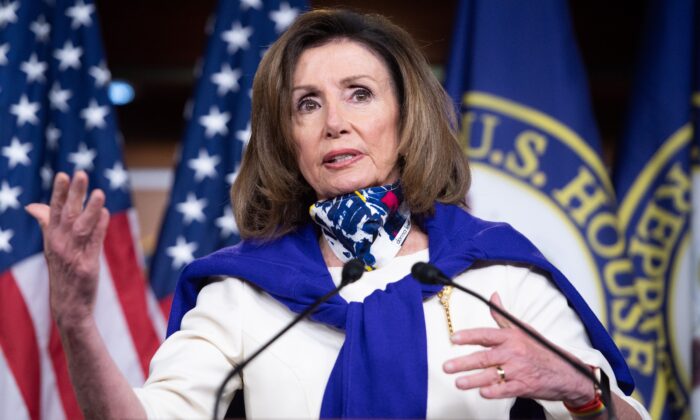 Speaker of the House Nancy Pelosi (D-Calif.) speaks during a press conference on Capitol Hill in Washington on May 21, 2020. (Saul Loeb/AFP via Getty Images)
Politics

House Republicans filed a lawsuit against House Speaker Nancy Pelosi (D-Calif.) on May 26 in an effort to block a system of proxy voting put in place that allows members to vote on each other’s behalf during the CCP virus pandemic.

Pelosi announced earlier this month that the House of Representatives would begin a 45-day period of “remote proceedings,” which would include proxy voting on the House floor, allowing members who are unable to be physically present at Capitol Hill due to the CCP virus pandemic to designate another lawmaker as their “proxy” and cast votes on their behalf.

Members will also be able to attend committee meetings virtually during the pandemic. The historic ruling, passed as part of a $3 trillion aid bill that the Republican-controlled Senate so far has not taken up, was approved largely along party lines but is only temporary.

However, a lawsuit, led by House Minority Leader Kevin McCarthy (R-Calif.), alleges the new rules are unconstitutional (pdf) because the Constitution requires a “quorum,” of lawmakers to be physically present in order to conduct business. Twenty other Republican members of Congress and four constituents are listed as co-plaintiffs.

It also argues that changes to how the House votes were not enacted amid the Yellow Fever of 1793, the Civil War, the burning of the Capitol during the War of 1812, the Spanish Flu of 1918, or the 9/11 terror attack, noting that “Congress has never flinched from its constitutional duty to assemble at the nation’s capital and conduct the people’s business.”

“This week, House Democrats will break over 230 years of precedent and allow Members of Congress to vote by proxy on the House floor,” McCarthy said in a statement announcing the lawsuit. “This is not simply arcane parliamentary procedure. It is a brazen violation of the Constitution, a dereliction of our duty as elected officials, and would silence the American people’s voice during a crisis. Although I wish this matter could have been solved on a bipartisan basis, the stakes are too high to let this injustice go unaddressed. That is why, along with other members of the House and our constituents, I have filed a lawsuit in federal court to overturn Speaker Pelosi’s unconstitutional power grab.”

“The speaker’s reckless and partisan decision to adopt proxy voting was done despite unified opposition from the minority and even members of her own party. This is a serious matter that will damage the integrity of the House’s actions now and in the future,” he added.

But Pelosi dismissed the GOP lawsuit Tuesday evening, calling it a “sad stunt” that will not block the House from moving forward.

“House Republicans’ sad stunt shows that their only focus is to delay and obstruct urgently needed action to meet the needs of American workers and families during the coronavirus crisis,” Pelosi said in a statement. “The House’s position that remote voting by proxy during a pandemic is fully consistent with the Constitution is supported by expert legal analyses.”

So far, 63 Democratic members have already sent a letter to the Clerk of the United States House of Representatives, Cheryl L. Johnson, designating another member to vote on their behalf this week. No Republicans have done so, Axios reported.