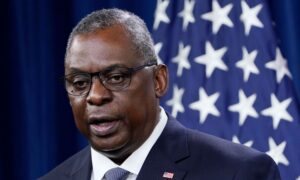 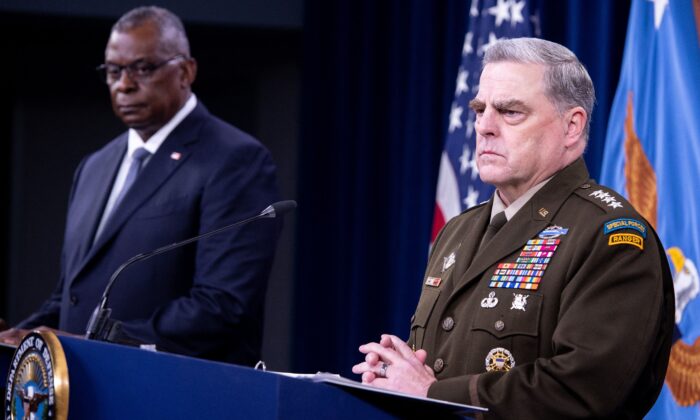 Secretary of Defense Lloyd Austin and Army General Mark Milley (R) hold a press briefing about the U.S. military drawdown in Afghanistan, at the Pentagon in Washington on Sept. 1, 2021. (Saul Loeb/AFP via Getty Images)
US News

Defense Secretary Lloyd Austin should open an official investigation into reports that Gen. Mark Milley held secret calls with a Chinese general, a group of House Republicans said on Sept. 16.

In a letter to Austin, the group asked Austin to open an Army Regulation 15–6 investigation into the calls, which Milley’s spokesman appears to have confirmed took place.

Rep. Scott Perry (R-Pa.) and 26 other Republicans said they’re “gravely concerned” with “Milley’s ability to exercise his duties and responsibilities as Chairman of the Joint Chiefs of Staff.”

“In this recent case, our specific concerns involve reports from 14 September 2021, which indicate that Gen. Milley blatantly disregarded the concept of civilian control of the military, and gave aid and comfort to America’s principal adversary, the Chinese Communist Party,” they wrote.

John Kirby, the Pentagon’s press secretary, told The Epoch Times in an email that the Department of Defense is aware of the letter and will respond to the members directly.

“General Milley retains the trust and confidence of Secretary Austin,” he added.

The Joint Chiefs of Staff didn’t return a query.

According to anonymously sourced reports, Milley told Chinese Gen. Li Zuocheng across conversations in October 2020 and January that the United States wasn’t going to attack China and suggested that he would tip off China if an attack were about to occur.

Republicans say those remarks, if accurately reported, amount to treason, and have called on President Joe Biden to fire Milley, or for Milley to resign.

Biden offered his support for Milley on Sept. 15, without commenting on the veracity of the reporting. Austin is an appointee of Biden, while Milley was appointed by President Donald Trump.

An Army Regulation 15–6 investigation can be formal or informal. The members of Congress are asking for a formal probe.

While Milley hasn’t personally commented, a spokesman for the Joint Chiefs of Staff said on Sept. 15 that Milley “regularly communicates with Chiefs of Defense across the world, including with China and Russia” and confirmed that Milley spoke with the Chinese in October 2020 and January.

The calls “were in keeping with these duties and responsibilities conveying reassurance in order to maintain strategic stability,” the spokesman said.

But the calls were unauthorized, Christopher Miller, who headed the Pentagon when the second one took place, said on Sept. 15.

“If the reporting … is accurate, it represents a disgraceful and unprecedented act of insubordination by the Nation’s top military officer,” Miller said.