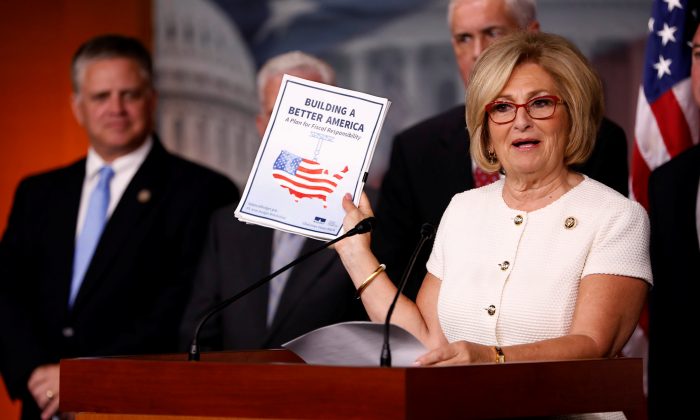 WASHINGTON—Republicans in the House of Representatives released a fiscal 2018 budget plan on Tuesday that could pose a major new political test for President Donald Trump’s legislative agenda by combining tax reform with controversial spending cuts.

The $4 trillion blueprint would allow an overhaul of the tax code to pass Congress without support from Democrats, along with a partial repeal of the 2010 Dodd-Frank Wall Street reform law and $203 billion in savings from mandatory federal programs including food stamps over the next decade.

Those changes and others would be combined in a single piece of legislation.

“In past years the budget has only been a vision but now with a Republican Congress and a Republican White House this budget is a plan for action,” House Budget Committee Chair Diane Black said at a news conference.

The prospect of reduced benefits for the poor and major tax cuts for businesses and individuals is already a source of infighting between House Republican conservatives who want larger spending reductions and moderates who oppose them.

In the Senate, a similar Republican battle over the repeal of Obamacare taxes on the wealthy and reduced health insurance benefits for lower-income Americans has helped sink healthcare legislation.

The spending plan, which covers the fiscal year beginning Oct. 1, aims to move the government from a $472 billion deficit in 2018 to a $9 billion budget surplus in 2027.

The change is based in part on a Budget Committee forecast of U.S. economic growth of 2.6 percent annually that assumes future changes in tax, healthcare and financial laws, as well as deregulation. The nonpartisan Congressional Budget Office has forecast economic growth of 1.9 percent from 2017 to 2027.

The House budget plan would include $621.5 billion in defense spending and $511 billion on nondefense discretionary spending in 2018.

The Budget Committee is expected to approve the plan later this week and send it to the Housefloor for a full vote. Black said she believed it would have the support to pass.

The plan is vital to Republican aims of overhauling the U.S. tax code while avoiding a Democratic filibuster in the Senate.

The plan instructs 11 House committees to find savings from programs and policies they oversee, including taxes, financial regulation, food stamps and federal pensions.

The instructions would allow final legislation to pass the Senate with a simple majority through a parliamentary process know as reconciliation. Republicans control the Senate by a 52-48 margin. Without reconciliation, tax reform would require 60 Senate votes.