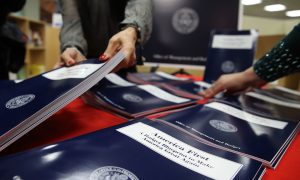 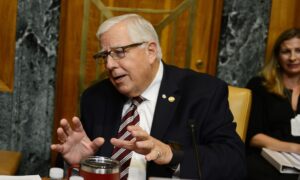 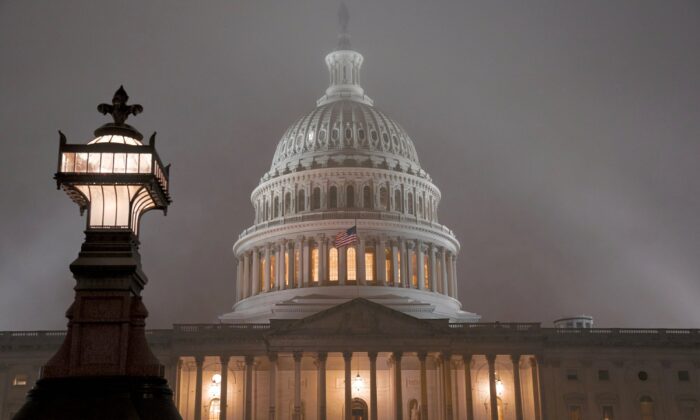 The U.S. Capitol in Washington is shrouded in mist, on the night of Dec. 13, 2019. (J. Scott Applewhite/AP Photo)
Politics

WASHINGTON—In the final work week of the year, members of the House of Representatives on Dec. 17 passed a bipartisan spending package ahead of the Dec. 20 deadline, enabling a government shutdown to be averted.

The Senate is expected to vote on the package this week and send it to the president for his signature.

Lawmakers finalized the spending bills at an unusual speed, as they have a lot to do this week before heading home for the holidays, including a crucial House vote on impeaching President Donald Trump.

The massive government funding package, more than 2,300 pages long, was released on Dec. 16, a day before the House vote. The package covers approximately $1.4 trillion in discretionary government spending that includes $738 billion in military funding and $632 billion in non-defense spending.

The House passed the 12 appropriations in two separate bills that fund the government through Sept. 30, 2020.

“These bills are the product of bipartisan, bicameral compromise,” House Appropriations Committee Chairwoman Nita Lowey (D-N.Y.) said at a House Rules Committee hearing Dec. 16. “While there are some things I would have done differently had I written these bills alone, I am very proud of the work we have completed together.”

According to a report by the Committee for a Responsible Federal Budget, the total package could result in $500 billion of additional debt over the next decade.

The Congressional Budget Office earlier estimated that the budget deal agreed to by congressional leaders and the White House would increase deficits by nearly $1.7 trillion over a decade, assuming that spending continues to grow at the rate of inflation beyond 2021.

One of the thorny issues in negotiations between the White House and Democrats was the funding for the construction of a wall along the U.S.–Mexico border. The deal awards the Trump administration more than $1.37 billion for the border wall—equal to last year’s funding level. This is significantly less than the $8.6 billion the president had sought.

The deal, however, is a win for Trump as it preserves his authority to transfer funds for the wall from other accounts.

In February, Trump declared the border situation a national emergency, which allowed him to redirect more than $6 billion from the Pentagon toward wall construction despite Democrats’ objections.

Trump is expected to sign the spending measures at the end of the week, White House counselor Kellyanne Conway said.

“The president is poised to sign it to keep the government open,” she told reporters on Dec. 17.

“A year after [Democrats] called it a manufactured crisis, the president is getting $1.375 billion for his wall, and they didn’t mess with his authorities at all,” Conway added. “There’s a lot of good stuff in there.”

In the three years since Trump took office, the administration has built 89.5 miles of border wall as of Dec. 6, a senior administration official told The Epoch Times.

In fiscal year 2020, the administration plans to build approximately 300 miles, with $8.6 billion from Homeland Security and Pentagon accounts, the official added.

What’s in the Package?

The spending package also includes a 3.1 percent raise for both members of the military and federal civilian employees. In addition, for the first time in 20 years, it provides $25 million for gun violence prevention research and $425 million for election security grants.

The age to purchase tobacco products is increased to 21 from 18, in the spending measure. In an effort to combat the youth vaping problem, the ban will apply to both cigarettes and electronic cigarettes.

The deal also reauthorizes the U.S. Export-Import Bank, providing it a seven-year mandate, the longest in the credit agency’s history.

The Trump administration has been urging Congress to revive the bank for both economic and national security reasons. Some Republicans and advocacy groups, however, have been opposing the bank, calling it “corporate welfare.”

Republicans managed to maintain the status quo in the abortion-funding battle.

In March, the Trump administration issued new rules to block the availability of Title X grants to clinics that provide abortions or offer abortion referrals. It also prevented foreign aid funds from going to organizations that perform or promote abortions overseas. Democrats had sought to reverse those prohibitions in the funding bills through “poison pill” riders, but failed.

Abortion-rights advocates reacted to the news.

“Congress had the chance–but failed—to protect reproductive health care in the U.S. and abroad in the 2020 spending bill,” Planned Parenthood Action, a nonprofit advocacy group, stated on Twitter on Dec. 16. “Both the Title X and global gag rules stand, threatening access to birth control and other care for millions.”

However, “it’s not a total win” for Republicans, said Rachel Bovard, senior director of policy at Conservative Partnership Institute.

According to Bovard, Democrats and Republicans agreed at the 11th hour to expand abortion coverage as part of Obamacare’s health coverage tax credit and the Indian employment credit.