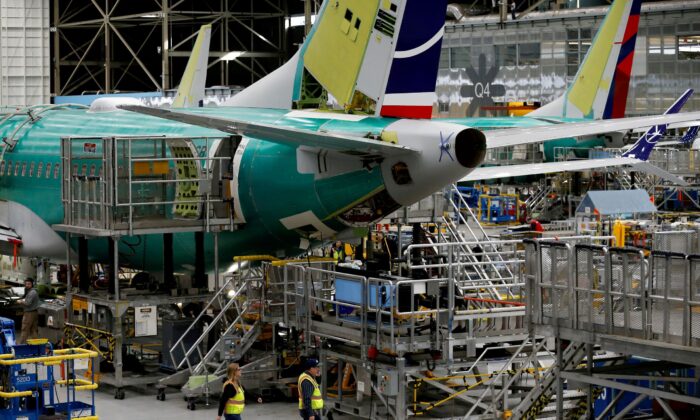 Employees walk by the end of a 737 Max aircraft at the Boeing factory in Renton, Wash., on March 27, 2019. (Lindsey Wasson/Reuters)
Business & Economy

WASHINGTON—A House committee will hold a hearing on Thursday with the head of the Federal Aviation Administration (FAA) on its efforts to reform airplane certification following two Boeing 737 MAX crashes that killed 346 people.

One issue is ensuring people performing aircraft certification tasks on behalf of the FAA do not feel undue pressure.

On Friday, the FAA issued two memos on its reform efforts. One directs FAA teams for Boeing, Pratt & Whitney, a unit of Raytheon, and General Electric to assign FAA aviation safety personnel with appropriate expertise within 60 days to serve as advisors to the oversight offices for each company.

The other requires that FAA employees review for approval or rejection all-new unit member selections to the oversight offices.

The law requires an independent review of Boeing’s safety culture. That review is still pending.

Acting FAA Associate Administrator for Safety Chris Rocheleau said a new agency office overseeing oversight efforts that opened this year “is a key part of the FAA’s ability to provide comprehensive oversight of manufacturers and their products”. It also allows FAA “to more quickly identify and address areas of concern and to make sure safety does not take a back seat to business objectives.”

DeFazio’s panel in a 2020 report said the MAX crashes “were the horrific culmination of a series of faulty technical assumptions by Boeing’s engineers, a lack of transparency on the part of Boeing’s management, and grossly insufficient oversight by the FAA.”