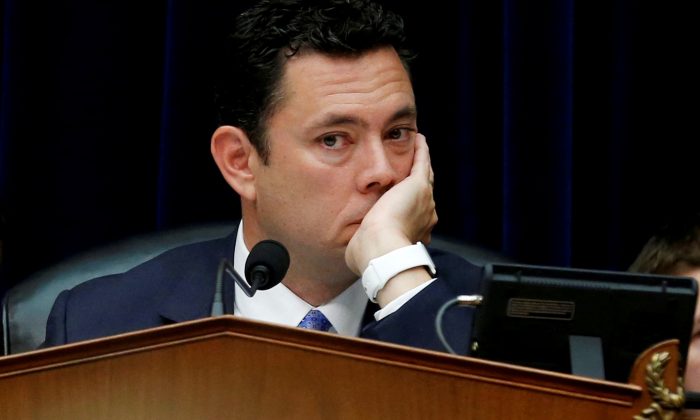 House Oversight and Government Reform Committee Chairman Jason Chaffetz (R-UT) during a committee hearing about the private email server of Democratic presidential nominee Hillary Clinton, used during her tenure as Secretary of State, on Capitol Hill in Washington on Sep. 13, 2016. (REUTERS/Jonathan Ernst)
Politics

WASHINGTON—U.S. Representative Jason Chaffetz, who chairs a House committee with broad investigative powers, on Wednesday announced his plans to leave Congress after the 2018 midterm elections, saying he had no intention of running for any political office.

“I have no ulterior motives. I am healthy. I am confident I would continue to be re-elected by large margins. I have the full support of Speaker Ryan to continue as Chairman of the Oversight and Government Reform Committee. That said, I have made a personal decision to return to the private sector,” Chaffetz said in a statement on Facebook.

The conservative Republican, who was first elected to the House in 2008 and represents a district in eastern Utah, gained prominence as head of the committee that was investigating Democratic presidential candidate Hillary Clinton’s use of a private email server.

With Trump in the White House, Chaffetz early this year said he would use his committee chairmanship to continue investigating Clinton.

Chaffetz, 50, had in the past considered running for a Senate seat and in announcing his retirement from the House at the end of his term next year he is leaving open that option.

“I may run again for public office, but not in 2018,” Chaffetz said in his Facebook posting.

A former Chaffetz aide told Reuters the congressman may seek to run for Utah governor in 2020, though no firm decision had been made yet.