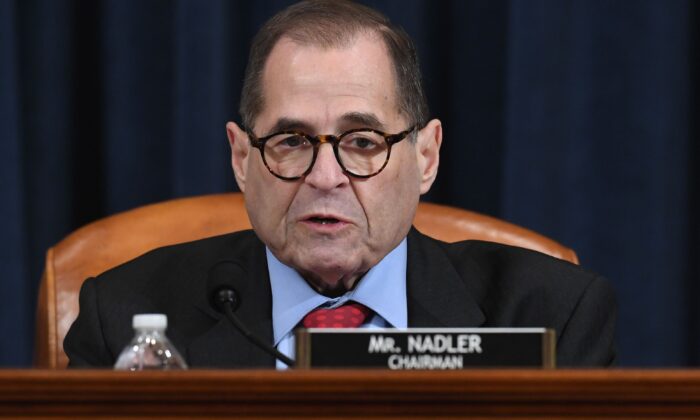 The House Judiciary Committee approved two articles of impeachment against President Donald Trump on Dec. 13 in a party-line vote.

The articles accuse Trump of abusing the office of the presidency and obstructing Congress.

Article One and Article Two were approved 23-17 in separate votes. As expected, Democrats voted for each article and all Republicans voted against both articles.

The committee consists of 24 Democrats and 17 Republicans but Rep. Ted Lieu (D-Calif.) wasn’t present due to health issues.

The vote was expected to occur on Thursday before House Judiciary Chairman Jerrold Nadler (D-N.Y.) made a surprise announcement at about 11:20 p.m. EST, telling the committee: “I want the members on both sides of the aisle to think about what is happening over these last two days and to search their consciences before we cast our final votes.”

The debate started Wednesday night at 7 p.m. and continued on Thursday morning, with members lambasting each other for either supporting or opposing the impeachment of Trump for around 12 hours.

Democrats said that there’s ample evidence showing Trump committed high crimes and misdemeanors, while Republicans asserted there is no evidence.

“The biggest difference in the Clinton impeachment and this one is that President Clinton committed a crime, perjury. This president isn’t even accused of committing a crime,” Rep. Steve Chabot (R-Ohio) said.

He called Ukraine “one of the most corrupt countries on the planet” and said Trump “was well aware of that fact,” making him skeptical of the aid that Congress approved to give the country.

They also noted Trump’s opposition has been working since he was elected to try to remove him from office.

“You guys don’t respect the 63 million people who voted for this guy. That’s why the Speaker of the House called him an ‘imposter,'” Rep. Jim Jordan (R-Ohio).

Democrats pushed back, continually asserting that “the facts” back up their case.

Rep. Val Deming (D-Fla.) said the congressionally approved aid for Ukraine was only released by the White House after the president “was caught.”

“The president abused his power—the precious power of his office to coerce a country that was dependent on us,” she said.

Trump asked Ukrainian President Volodymyr Zelensky in July to “look into” the actions of former Vice President Joe Biden and Biden’s son, Hunter Biden. While still in office, Biden threatened to withhold $1 billion from Ukraine unless a prosecutor probing his son’s employer was ousted.

Democrats have accused Trump of withholding the aid from Ukraine to try to force Zelensky to probe the Bidens and try to find a server that was examined by Crowdstrike, a firm hired by the Democratic National Committee in 2016 to look into a breach.

“President Trump asked for a favor. He wanted Ukraine to announce two bogus investigations: one into former Vice President Biden, his leading opponent in the 2020 election; and another to advance a conspiracy theory that Ukraine, not Russia, attacked our elections in 2016,” Nadler (D-N.Y.) said in his opening statement Wednesday night.

Ranking Member Doug Collins (R-Ga.) accused Democrats of not believing Zelensky, who has repeatedly said his call with Trump was fine and that he did not feel pressured.

“The majority is saying that Mr. Zelensky is a liar, and we in this committee are tearing down a world leader in the eyes that don’t like him in his own country. And Russia who is attacking them. Think about that one for just a second. Let that sink in. When we can’t make our case, we tear down not only try to tear down the leader of the free world, President Trump. We are tearing down the newly elected leader of the Ukraine. This is amazing to me,” Collins said.

Trump took to Twitter early Thursday, claiming he has done nothing wrong while citing a segment on “Fox & Friends” reporting on polls that show most Americans oppose impeaching the president, before sharing a slew of posts from allies like Rep. Matt Gaetz (R-Fla.).

He added additional missives on Friday. In one, he wrote: “Poll numbers have gone through the roof in favor of No Impeachment, especially with Swing States and Independents in Swing States. People have figured out that the Democrats have no case, it is a total Hoax.”