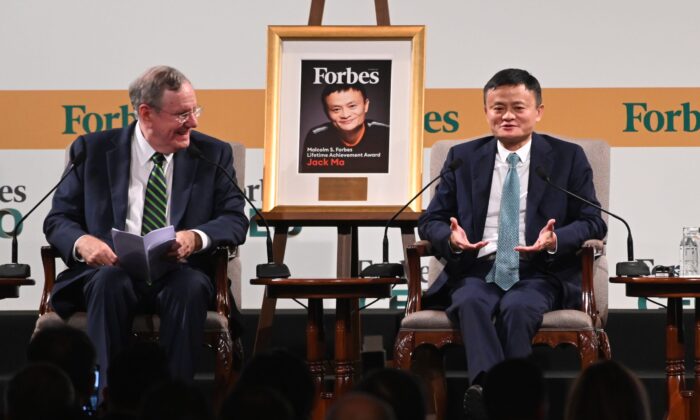 Republican lawmakers on the House Permanent Select Committee on Intelligence launched a probe on the potential Chinese ownership and influence on business media outlet Forbes, which is planning to go public via a merger with a publicly traded special purpose acquisition company (SPAC).

Then-U.S. Rep. Devin Nunes (R-Calif.) initiated the investigation in late 2021 after Forbes’s announcement of its listing plans in August.

“The PRC’s control over Chinese industry and investment creates a non-market influence on global commerce,” the letter, obtained by The Epoch Times, stated, referring to the regime’s official name, the People’s Republic of China.

“Enabling the acquisition, transfer, and theft of U.S. innovation, the PRC’s grip on business is leveraged as a powerful platform for malign influence.”

Forbes’s merger at issue is with Magnum Opus Acquisition Ltd. (NYSE: OPA), a Hong Kong-based SPAC, a blank-check company that has no operations but enables its acquisition target to go public. The deal is evaluated at $630 million, and Forbes will go public under the ticker symbol of FRBS.

Magnum Opus initially announced that the merger would be complete by the first quarter. But on March 22, the company filed with the Securities and Exchange Commission (SEC) to extend the deadline to May 31.

Rep. Mike Turner (R-Ohio), who succeeded Nunes as the committee’s ranking GOP member, took over the investigation. Turner’s office didn’t respond by press time to a request by The Epoch Times for an update. The Washington Times first reported on the probe.

In Forbes’s response letter on Dec. 16, 2021, also seen by The Epoch Times, the company’s attorney denied any knowledge of investment from the Chinese Communist Party (CCP) or any China-based entities. He also denied any such entities’ influence on Forbes’s editorial and commercial operations or anyone at Forbes having met with the Chinese State Council Information Office, a central agency charged with foreign propaganda.

Yet the China or Hong Kong background of many players in the merger has stoked concerns about potential CCP influence in the deal, including its impact on free speech at the business publication.

The Daily Mail reported that Magnum Opus received seed funding from China Investment Corp. (CIC), one of the world’s largest sovereign wealth funds, with assets worth over $1 trillion and a five-year strategic plan (2018–2022) approved by China’s cabinet-like State Council. After Magnum Opus’s merger announcement with Forbes, CIC has since relinquished its shares.

To finance the Forbes acquisition, Magnum Opus reportedly raised $400 million through 19 private investment in public equity (PIPE) investors who would purchase FRBS shares directly below market price. According to the Daily Mail, most of the 19 PIPE investors are based in Hong Kong or Mainland China. It’s unclear whether CIC’s influence remains through any Hong Kong- or China-based investors among the PIPE investors.

Later on, Forbes announced on Feb. 10 that Binance—the world’s largest cryptocurrency exchange—would take the place of half the existing PIPE investors and invest $200 million in the Magnum Opus’s acquisition of Forbes. Upon successful completion of the merger, Binance’s chief communications officer Patrick Hillmann and Bill Chin, head of Binance Labs, the incubator arm of Binance, will join Forbes’s board.

Forbes is currently majority-owned by Hong Kong-based Integrated Whale Media Investments (IWM). In September 2014, IWM bought a 95 percent stake in Forbes in a deal valued at $475 million, while the remaining 5 percent belonged to the Forbes family.

In October 2015, the Forbes family sued IWM for not making due payments on a loan it took from the family to pay for the acquisition. The parties settled in January 2017.

Insiders at Forbes have expressed concern about Chinese influence in the deal, according to The Daily Mail, as well as fears that the publication will not be able to freely cover topics relating to China after the merger.

A Forbes spokesperson told The Epoch Times in an email that the company “is and always will be fiercely independent, and any suggestion that the Chinese or any other government would have any influence is completely unfounded.”

The spokesperson also pointed out that the outlet has continued to publish articles critical of China, including articles related to China’s economy, press freedom in China, and the Beijing Winter Olympics.

Binance was initially founded in Shanghai in 2017. Its founder, Zhao Changpeng, a Chinese Canadian, moved all its servers and its core team out of China in the fall of the same year, when China banned all initial coin offerings, according to Tech in Asia. Since then, the company has grown to a daily trade volume of $76 billion per day in 2021 from $500 million in 2017.

During the same month, Binance also formed a partnership with a state-owned supply chain management group under the supervision of China’s State Council. Prior to BCBI’s involvement, Binance’s Blockchain Charity Foundation pledged to support BRI in its commitment letter (pdf) to UNGC in October 2019.

In May 2020, BCBI published a two-part white paper detailing the digital yuan’s development and benefits, including the first-mover advantage in becoming the leading currency in digital asset pricing.

Binance in October delisted the Chinese yuan from its trading platform in response to the CCP’s crackdown on cryptocurrencies.

The cryptocurrency exchange sees Forbes as a strategic partner in educating consumers. Zhao was quoted in a Feb. 10 Forbes statement as saying, “As Web 3 and blockchain technologies move forward and the crypto market comes of age, we know that media is an essential element to build widespread consumer understanding and education.”

Forbes Chief Executive Officer Mike Federle said in the same statement that the company would become a leader in the field by tapping into Binance’s digital infrastructure and blockchain technology.

In an interview on March 4, Federle identified Forbes—which has covered crypto since 2012—as a resource for people interested in digital assets. He also spoke about the goal of growing its direct-to-customer business by playing a leading role in the future of finance and currency.

He says the company’s 10-year digital transformation built an audience of 150 million unique monthly users—114 million from the United States, according to the company’s website—across the Forbes ecosystem.

A Magnum Opus SEC filing in 2021 included Federle’s words that financial advisers were a group that had a “deep interest in Forbes.” He made the comment during an August 2021 interview with Business Insider. In 2019, the company acquired a majority stake in Q.ai, an artificial intelligence-driven financial advisory app.

Since 2021, Binance has met with licensing challenges in Japan, Germany, the United Kingdom, Canada, Singapore, Norway, and Hong Kong. It has also been under investigation by the U.S. Department of Justice (DOJ) and Internal Revenue Service for potential illegal transactions on the platform, and the SEC regarding disclosure to customers.

The SEC didn’t respond by press time to a request by The Epoch Times for comment. The current status of the DOJ–IRS investigation is unclear, and the IRS said it couldn’t confirm or deny an individual investigation.