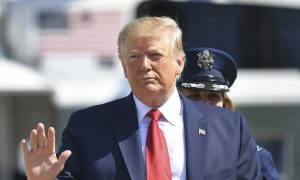 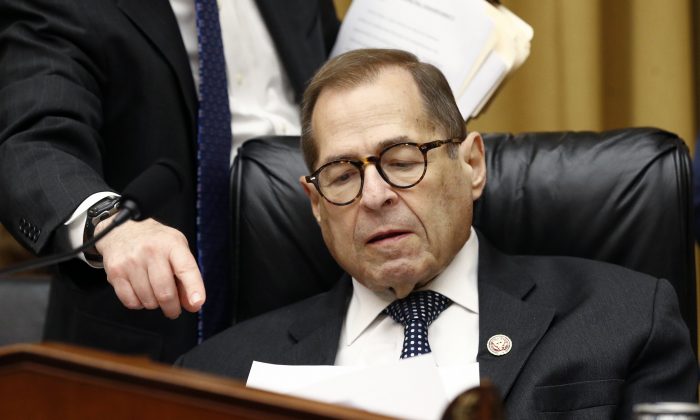 House Democrats voted to move forward in a plan to impeach President Donald Trump but Republicans dismissed the vote and some centrist members of the left criticized the move.

Despite special counsel Robert Mueller’s team concluding their investigation without establishing collusion between Trump and Russia—for years the allegations Democrats cited as impeachment-worthy—some Democrats have continued pushing to try to impeach Trump.

The latest move was a 24-17 party line vote by the House Judiciary Committee on Sept. 12.

“The resolution before us represents the necessary next step in our investigation of corruption, obstruction, and abuse of power,” committee Chairman Jerrold Nadler (D-N.Y.) said before the vote.

The vote enabled Nadler to figure out which hearings are part of the impeachment inquiry and allows committee counsel to question witnesses at the hearings that are determined to be part of the probe. It also gives Trump due process, according to Nadler.

Nadler said earlier this month that Democrats were still trying to impeach Trump. Majority Leader Steny Hoyer (D-Md.), the second in command to House Speaker Nancy Pelosi (D-Calif.), pushed back, saying on Wednesday that he didn’t believe an impeachment inquiry was underway. In a statement later in the day, he said he misunderstood the question.

“I strongly support Chairman Nadler and the Judiciary Committee Democrats as they proceed with their investigation ‘to determine whether to recommend articles of impeachment to the full House,’ as the resolution states. It is critical that Congress has access to all of the relevant facts, and we will follow those facts wherever they lead, including impeachment,” Hoyer said.

Pelosi told Fox News that she supported Nadler despite saying earlier this year that Democrats should focus on other issues.

“I think you should characterize it for what it is, it’s a continuation of what we have been doing,” she said. “You know we all work together on these things.”

Some centrist Democrats, though, have expressed frustration at the attempts to impeach.

“It’s sucking the air out of all of the good stuff we’re doing,” Rep. Donna Shalala (D-Fla.) told The Associated Press, noting very few of her constituents asked her about impeachment while lawmakers were out of Washington for the August recess.

Some Republicans dismissed the vote.

Rep. Doug Collins (R-Ga.) suggested it was an overblown gesture that lets Democrats garner support from the part of their base hopeful that Trump gets impeached while not actually taking enough action to actually try to impeach him.

“The difference between formal impeachment proceedings and what we’re doing today is a world apart no matter what the chairman just said. The chairman can do this at any time, because he wants the appearance of something that it’s not. You’re not in an impeachment inquiry.”

Collins, a possible replacement for retiring Sen. Johnny Isakson (R-Ga.), said on Twitter that the ambiguity was Nadler’s fault and could be solved if impeachment were brought to a vote, before posting a 1998 clip of Nadler talking about the impeachment inquiry into then-President Bill Clinton.

On July 17, the entire House voted 332-95 to set aside an impeachment measure sponsored by Rep. Al Green (D-La.). It was the third time Green brought the resolution against the president and the second time it failed to get passed.

“My colleagues know very well they don’t have the votes to authorize impeachment proceedings on the House floor, but they want to impeach the president anyway,” Collins said on Thursday. “So, they are pretending to initiate impeachment.”