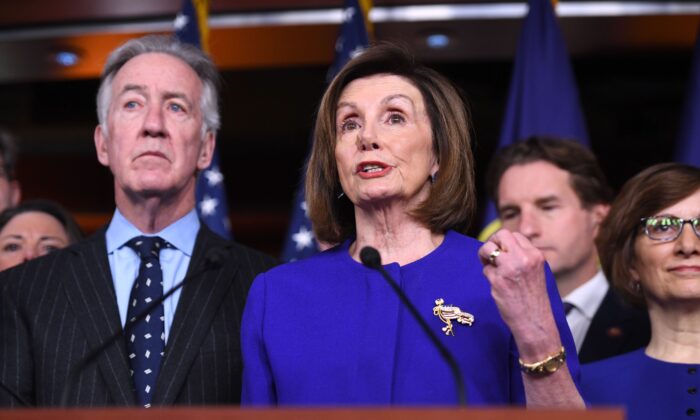 Speaker of the House Nancy Pelosi (D-Calif.) and (L) House Ways and Means Committee Chairman Richard Neal (D-Mass.) speak about the U.S.-Mexico-Canada Agreement, known as the USMCA, on Capitol Hill in Washington, on Dec. 10, 2019. (Saul Loeb/AFP via Getty Images)
Democrats

In a statement, the Massachusetts Democrat said the “historic” provisions had both been included as a part of the Build Back Better Act, as lawmakers seek to get it across the finish line after months of debate.

“For far too long, American workers have had to make the impossible choice between providing for their families and caring for them. Now, because of the leadership and tireless advocacy of the people’s House, meaningful paid family and medical leave will be included as part of the Build Back Better Act,” Neal said in a statement.

“The Ways and Means Committee crafted a policy that will finally give workers and their families the peace of mind of knowing that when disaster strikes, they can rely on paid leave to avoid total crisis. We do this responsibly, fully paying for the means-tested program. This is a matter of financial security, worker productivity, and most of all, humanity.”

Neal added that the paid medical and family leave provisions will “level the playing field” for small businesses across the nation who have struggled to provide such benefits and increase worker satisfaction and employee retention.

“I will continue to do whatever is necessary to get this provision signed into law by President [Joe] Biden and give the American people the basic support they deserve.”

As per the provision, on page 1,065 of the House Rules Committee-approved bill, “every individual who has filed an application for a comprehensive paid leave benefit shall be entitled to such a benefit for each month during such benefit period.”

The House’s bill states that in order to be paid, workers must “self-attest” their eligibility for the funds and have wages within the most recent quarter before their qualifying event to receive the benefit.

Benefits are also based on the individual’s average wages over the past eight quarters, meaning that individuals who have had very little work recently or infrequent work would receive a very low amount of benefits.

But the provision could mean that Social Security funds will be able to be drawn upon by individuals who are unemployed, Fox News reports.

House Ways and Means Committee Chairman Richard E. Neal and House Speaker Nancy Pelosi haven’t responded to a request for comment by the time of publishing.

Democrats’ latest provisions have been stripped down to four weeks from Biden’s previously envisioned program of 12 weeks, before it was scrapped from the bill last week. Although it has now been re-added, as of yet, it is unclear how the comprehensive paid leave will be funded.

Globally, more than 120 countries around the world provide paid maternity leave and health benefits by law, according to The International Labour Organization. The United States is one of only a handful of countries that does not have a national paid family and medical leave program.

The House Ways and Means Committee Republicans on Wednesday warned that the new paid leave plan will provide “no protection for small businesses who can’t afford to lose workers in a national labor shortage,” as employees would only need to provide their boss with seven days notice prior to taking the leave.

They also warned that allowing individuals to “self attest” on the application that they are eligible for such benefits could lead to “massive fraud.”

Self-certification policies in Democrats’ untargeted, emergency pandemic unemployment programs allowed fraudsters to get away with an estimated $400 billion in taxpayer dollars, the committee said.