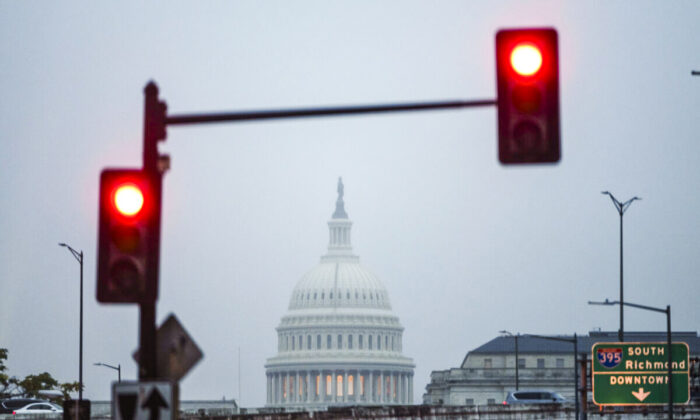 A view of the U.S. Capitol in Washington on Oct. 6, 2021. (Drew Angerer/Getty Images)
By Andrew Moran

Dozens of House Democrats say it’s time to eliminate the debt ceiling and instead allow unlimited borrowing so that the federal government can spend whatever it needs.

U.S. lawmakers are entrenched in another battle over the debt ceiling after Washington hit its borrowing limit of about $31.4 trillion last week. As a result, the Treasury Department has employed “extraordinary measures” to help cover the government’s obligations until June, when these tools will be exhausted.

Republicans have called for a debt-prioritization plan that includes a reduction in the record growth of federal spending before allowing an increase in the debt ceiling, according to a draft Republican Party proposal. However, a chorus of Democrats argue that it would be better if officials voted to cancel the debt limit and let the government borrow without any limit or restraint established by Congress.

Foster likened the situation to “ordering an expensive meal at a restaurant, eating it, and skipping out without payment.”

“Weaponizing the debt ceiling and using it as a pawn in partisan budget negotiations is dangerous and repeatedly brings our nation to the brink of default, which would be disastrous to the U.S. economy—something we’ve witnessed as recently as 2011 when Republicans created a debt ceiling crisis that resulted in the first-ever downgrade to the U.S. credit rating,” Foster said in a statement.

“We can and should have a real conversation about overall spending, but the full faith and credit of the United States must never be compromised.”

Since 1960, Congress has acted on the debt ceiling more than 75 times by raising the limit, temporarily extending it, or altering the definition. Meanwhile, the federal government is poised to spend more than $6 trillion for the fourth consecutive fiscal year in 2023.

This isn’t the first time that congressional Democrats have discussed abolishing the debt ceiling.

In October 2022, more than two dozen House Democrats penned a letter to then-House Speaker Nancy Pelosi (D-Calif.) and Senate Majority Leader Chuck Schumer (D-N.Y.) to support a bill that would authorize the Treasury secretary to increase the debt limit unilaterally or remove the federal limit entirely.

“If the counterintuitive nature of the current debt ceiling process is not reason enough to drive change, then the prospect of Republicans sending our economy into default for political gain should be,” the letter reads.

“Republicans have repeatedly signaled that they are willing and eager to use the debt limit as a bargaining tool if given the opportunity, and we should take them at their word.”

The $1 Trillion Coin Concept Is Back

In recent years, left-leaning economists and Democratic lawmakers have floated the idea of minting a $1 trillion platinum coin that would then be deposited in its bank account at the Federal Reserve, enabling politicians to withdraw from the account and fund government spending.

During the 2013 debt ceiling crisis, economist Paul Krugman urged the Treasury Department to explore the concept even if it “looked silly for a couple of minutes.”

Nearly a decade later, he championed the proposal again, writing in October 2021 that the Biden White House “should mint a $1 trillion platinum coin or declare that the Constitution gives it the right to issue whatever debt is needed to fund the government.”

Administration officials and other Democrats have revived the possibility of the Treasury relying on an obscure law approving the creation of a $1 trillion coin, recent reports indicate.

“The Secretary may mint and issue platinum bullion coins and proof platinum coins in accordance with such specifications, designs, varieties, quantities, denominations, and inscriptions as the Secretary, in the Secretary’s discretion, may prescribe from time to time.”

However, speaking in an interview with The Wall Street Journal, Treasury Secretary Janet Yellen noted that it isn’t even certain that the central bank would accept the coin.

“It truly is not by any means to be taken as a given that the Fed would do it, and I think especially with something that’s a gimmick,” she told the newspaper on Jan. 22. “The Fed is not required to accept it, there’s no requirement on the part of the Fed. It’s up to them what to do.”

Critics have offered several objections. The chief complaint is that such a coin would force the Fed to credit the Treasury with nonexistent money, meaning that the institution would need to expand the money supply and create inflation.

The second criticism is that the coin would only possess a face value of $1 trillion rather than maintain any intrinsic value.

Finally, opponents also say that it would create precedence for future governments to mint a coin to pay for its shortfalls, while also sending a message to prospective investors that the U.S. government and the national economy are in shambles.