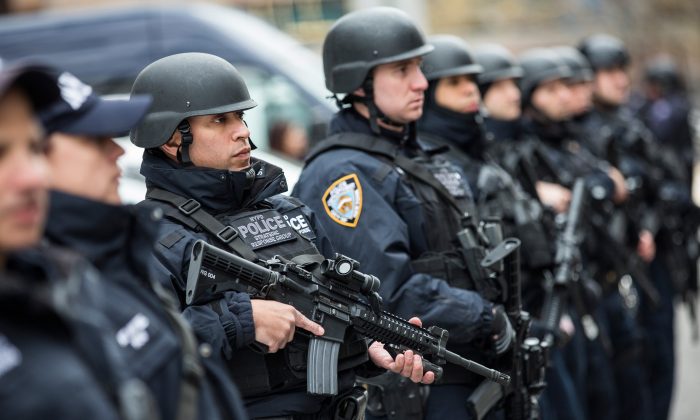 House Democrats passed a package of bills on Thursday aimed at bolstering police funding and public safety after Republican lawmakers accused them of being soft on crime amid a surge in violent crime across the United States.

The Mental Health Justice Act of 2022, sponsored by Rep. Katie Porter (D-Calif.), creates a grant program for states and local governments to train and dispatch mental health professionals to respond to emergencies involving behavioral health, as opposed to police.

Rep. Val Demings (D-Fla.), who introduced the VICTIM Act, called its passing a “major win for America’s public safety,” and said it passed the U.S. House with support from Democrats and Republicans.

The bill provides funding to local police departments to hire victim support personnel along with investigators to aid in solving unsolved homicides and violent crimes.

Specifically, the legislation would “establish a Department of Justice grant program to hire, train, and retain detectives and victim services personnel to investigate shootings and support victims,” Demings said in a statement.

“Real life is different from television. Half of gun murders in the United States go unsolved, and victims are often left with no justice and little support,” said Demings, the first female chief of police of Orlando, Florida.

“I vividly recall being on the scenes of young people, dead as a result of violence, knowing that their families would soon receive devastating news. I saw as a detective, detective sergeant, and chief of police that violent crimes require a coordinated and professional response to ensure justice. Passage of the VICTIM Act is a huge win for the safety of American communities and will help us put away violent criminals and keep families safe,” Demings added.

However, the packages, the result of lengthy negotiations between moderates and progressives, also exposed intraparty divisions as some progressive Democrats were hesitant to accept the bills over concerns about increasing money for local police departments, which threatened to derail the bills.

Following nearly two hours of delayed negotiations, lawmakers voted 216–215 in favor of a rule setting the terms of the debate on the legislation.

However, it remains to be seen if the package will receive enough support from Senate Republicans to pass.

‘They Don’t Want to Fund the Police’

Rep. Matt Gaetz (R-Fla.) in a speech on the House floor on Thursday was vocal about his lack of support for the package of bills.

“They don’t want to fund the police, they want to addict the police to the federal dollar,” said Gaetz. “And that comes with a more efficient way to ensure centralized decision making, not the localized decision making that our Constitution promises and has offered great promise to this country for generations.”

“Do not buy this theory that this legislation is intended to help law enforcement. The best thing we could do for law enforcement is to get out of their way, have their back, and call out politicians who are trying to defund the police and devalue the commitment they make to our communities,” Gaetz added.

The latest package of bills comes as violent crime has soared across the United States this year, surging 4 percent in 2022 when compared to the same time period in 2021, according to a midyear comparison survey from the Major Cities Chiefs Association (MCCA).

Robberies also rose by 12 percent in the first six months of this year compared to 2021, and aggravated assaults were up 2.5 percent. However, homicides are down 2 percent year over year, according to MCCA data.

Meanwhile, calls across the country to defund the police and chronic law enforcement shortages have further exacerbated the situation.