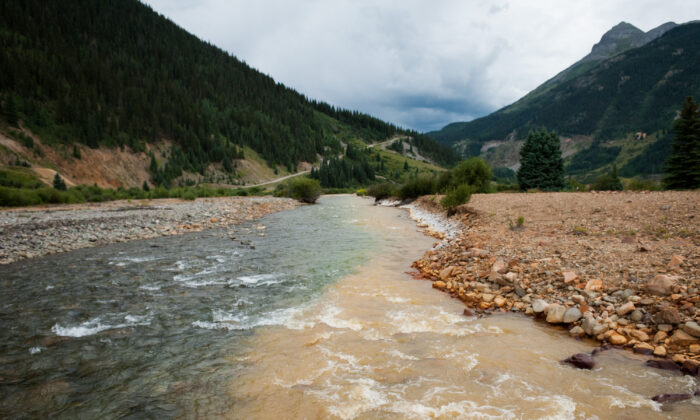 Cement Creek, which was flooded with millions of gallons of mining wastewater, meets with the Animas River on Aug. 11, 2015 in Silverton, Colo. The Environmental Protection Agency accidentally released approximately 3 million gallons of wastewater into the creek from the Gold King mine, polluting the larger Animas River downstream. (Theo Stroomer/Getty Images)
Environment

House Committee Pushes for Change at Board for Investigating Chemical Spills

The House Committee on Energy and Commerce held a hearing on the Chemical Safety and Hazard Investigation Board (CSB) on Sept. 29, revealing some bipartisan consensus on the general need to improve the long-troubled agency while raising questions about its limited response to tens of thousands of reports, its vulnerability to political agendas, and its freedom to investigate chemical spills caused by other federal agencies, such as the Environmental Protection Agency (EPA).

Modeled after the National Transportation and Safety Board (NTSB), the CSB was authorized in 1990 and launched in 1998.

Charged with investigating major accidental releases of chemicals, such as the West Fertilizer Company plant explosion in Texas, the agency has had a notoriously contentious history, with one recent chair, Obama appointee Rafael Moure-Eraso, resigning in 2015 after an investigation led to accusations of mismanagement and punishing whistleblowers.

The hearing comes days after the committee approved three nominees to join the board’s sole current member, Trump appointee Dr. Katherine A. Lemos. The board is supposed to have five members, according to its enabling statute.

One of those nominees, Jennifer Sass, was approved despite Republican opposition, which centered on a reported Twitter post attacking the Environmental Protection Agency (EPA) for its interactions with an industry trade association, the American Chemistry Council (ACC).

All three nominees await confirmation by the Senate.

“We want to see this agency flourish,” Rep. Diana DeGette (D-Colo.), chair of the Subcommittee on Oversight and Investigations, said in her opening remarks. “In recent years, board vacancies, unfilled staff positions, employee morale issues, and most recently, the COVID-19 pandemic have led to underproductivity at the agency.”

While Rep. Frank Pallone (D-N.J.), chair of the Energy and Commerce Committee, tied the CSB’s work to climate change, Republican leaders on the committee, including ranking member Rep. Cathy McMorris-Rodgers (R-Wash.), stressed the CSB’s role as an independent investigatory body, not charged with developing regulations.

“The CSB should channel its resources into conducting investigations, especially looking for ways to meet the baseline,” McMorris-Rodgers said in her opening remarks.

“It should not use its investigations and the recommendations in its reports to push certain agendas.”

Committee members also questioned Lemos, who testified to the committee under oath.

In response to questioning from DeGette, Lemos said she has a plan to complete all 18 backlogged investigations.

Questioned by the ranking member for Oversight and Investigations, Rep. Morgan Griffith (R.-Va.), Lemos testified that the CSB’s board is codifying unbiased, standardized requirements for the recommendations in its reports, saying that those requirements would be released “within months.”

She also told Griffith that every recommendation, report, safety bulletin, and safety alert is legally reviewed prior to release, stating “that was not the case prior” to her tenure.

Lemos was also questioned by Pallone on how industrial facilities should adjust to “a changing climate.”

“We anticipate seeing more and more of these [extreme weather] events, so it’s going to become even more of a challenge moving forward,” Lemos said.

“In terms of what plants or facilities can be doing, following guidance that is out there to ensure that they’re not just preparing for today’s historical but tomorrow’s, based on recent history, and predicted future, level of extreme events.”

Questioned by Rodgers on whether new investigations can actually be completed in six to 12 months, Lemos said that six to 12 months “is not the timeline that things have been closing,” adding that the CSB’s model, the NTSB, typically takes years to issue its full reports.

“Part of the challenge is that our agency has moved to an all-or-nothing, full investigation 160-page report or not at all,” Lemos said. “Part of what I’m trying to do is return to what the CSB used to do, and what the NTSB does, and provide a range of products such that we can get out immediate safety recommendations and products within that timeframe.”

Rep. Jan Schakowsky (D.-Ill.) asked Lemos about the number of incidents reported to the CSB per year, “When somebody calls up and says there’s been a problem, how many are those?”

Questioned further by Schakowsky on the tens of thousands of calls, Lemos said that under last year’s reporting criteria, just 88 reported incidents qualified for further investigation.

“Our attempt to take a range approach of our products will allow us to address all of those 88,” Lemos said.

Rep. Gary Palmer (R.-Ala.) asked Lemos about the CSB’s duty and ability to investigate other federal agencies, citing the EPA’s role in the 2015 Gold King Mine release of toxic wastewater in Colorado, as well as a spill in Greensboro, Georgia.

“The Chemical Safety Board has the responsibility to investigate—that doesn’t mean the EPA does not investigate as well, similar to the NTSB and the [Federal Aviation Authority],” Lemos said.

“The CSB is an independent investigation that is not focused on the oversight or punitive element—it is to determine the root causes” she said, later adding that in some investigations, the CSB defers to other federal agencies.