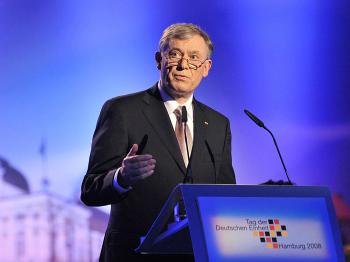 By Heike Soleinsky
Print
German Federal President gave a speech in honor of the 18th anniversary of the reunification of East and West Germany, during the day of “German Unity.”

“Our people are free and politically unified. We live behind secure borders, and are surrounded by friends and partners. We enjoy more prosperity than many others, and we hold democracy and rights in good stead,” said Koehler at the beginning of his speech.

That does not mean that Koehler can’t recognize the mistakes made during the reunification, and the challenges that still lie ahead. But he also sees all the above as a reason for happiness and a reason to celebrate.

Koehler stressed cultural values in his speech, as they orientate people towards a specific direction. Value brings a standard or measure to the people and fosters quality of life. Culture strengthens creativity, fantasy, and beauty, and brings forward surprisingly great ideas. Creativity is inherent in culture and brings to life energy. It awakens in people a feeling that the skies are the limit.

The individual finds expression potentials for him or her, and it makes the person tolerant and free, “Anyone who takes culture into ones daily life is bound by what was before, as well into what surrounds him and her. It gives every human being in the world the same rights—to live within ones own culture, and to maintain it,” said Koehler.

The nation’s German culture is built on the creativity of countless people, which happily keep a presence in school associations, take literature courses, join theater groups, are in orchestras, are active in city and state organizations, and take part in the many festive activities that are organized by cultural groups. Thousands of Websites are also maintained on the Internet, through which they preserve the German culture for this and future generations.

On the other hand, a nation’s culture is different from daily culture, which is self-evident and should stay mundane.

“Culture continues through showing respect to those one comes in contact with, through the friendships between the young and the old, through politeness and respect towards others, showing tolerance towards different life styles, and respecting public property. It is what allows for attentiveness towards others and modesty. I think that on these last points we have to maintain vigilance. There is a tear that we must assure not to grow and become common day occurrences,” Kohler cautioned in his speech.

Koehler suggested that the source of energy arose “through the conviction that a nation can be more than just a community that houses together, and a security where one reciprocates.”

He continued, "The conviction that one, as a nation and a state, has the duty to grow above all, and from the here and now. The duty is extensive and exhausting, but achievable, and made as it was meant for us."

We must accept that "The constant swinging between being high in the air, and sick at heart, must end when we understand our abilities, and take them lightly and humbly."

What we must do is use "rationality and judgment to make our country better, help others and help the world heal."

Koehler proposed that everyone "protect each other, take responsibility, and view all of it as conformity instead of burden."

The German Federal President has found this type of attitude among the Germans more often than not. What he believes is important, is for all to be responsible, strive for happiness, hold everyone in high regard, look at everything with dignity, and keep in mind the unalienable right that all humans are of value, and one can trust their strength.