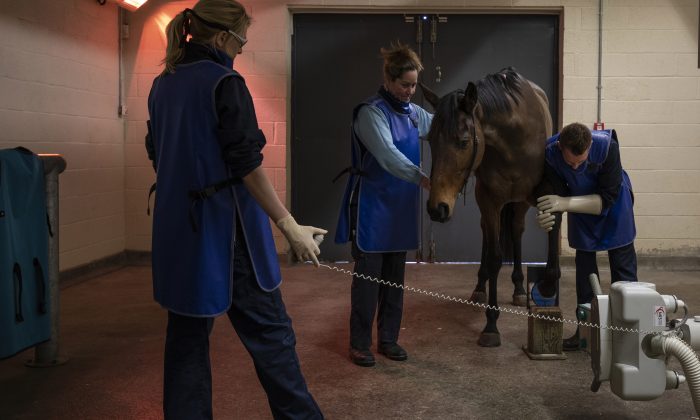 A horse is prepared for X-ray at the Newmarket Equine Hospital in Newmarket, England, on Feb. 11, 2019. After horse racing was suspended for six days due to an outbreak of equine influenza, racing across the UK resumed on Feb. 13, 2019. (Dan Kitwood/Getty Images)
Viewpoints

Horses and Humans: Will We Ever Conquer Influenza?

LONDON—In December 2018, I wrote about the pros and cons of “the jab,” as the influenza vaccine is called in Britain.

Ideally, an energetic national campaign to keep the population disease-free should result in low levels of illness, but in recent months, as happens most years, there has been a spike in cases across the world.

Right now, in February 2019, the period of time when the Northern Hemisphere sees a significant flu season, Australia is suffering from a steep rise in cases, even though they are still enjoying summertime. Cases are almost three times last summer’s level, and doctors are urging pregnant women due to give birth before April to be immunized, but the rest of its population should “wait until the 2019 ’flu vaccine becomes available in April or May.” One just has to hope that it doesn’t reach epidemic proportions.

Whenever I read about governments suddenly panicking amid a major outbreak and urging vaccination, I wonder if humankind is ever going to be able to tackle this nasty, often fatal ailment. What kills flu victims most often is the complication of pneumonia. In turn, there is a pneumonia vaccine, but its administration is usually restricted to those who are over 50.

As of early February 2019, every state in the United States had a worrying incidence of flu. In Garland, Texas, little Ashanti Grinage, a 4-year-old, developed a high fever on Jan. 29. She was sent home from the emergency room with medication, but developed a cough and within two days was dead. The doctors who examined her failed to detect a serious chest complaint. Would a flu shot have helped? If her cough was a bacterial infection, perhaps not, but those in favor of immunization posit that the vaccine boosts the immune system and lessens the possibility of contracting flu that can lead to bronchial disease. Ashanti’s father, Martel, told local television, “I’m mad at everyone. I’m mad at the hospital. I’m mad at God. I can’t lie to you.”

Schools in many U.S. cities and towns have had to close, not just because of an increase in illness among children but also among teachers and substitute staff. Now doctors across the United States say children 6 months and younger need a flu shot. In the UK, teachers are urged to get “the jab,” but if American teachers who may have been immunized are still coming down with flu, it is possible the shot isn’t tackling the specific strain of the virus.

Great Britain is experiencing something just short of an epidemic. Intensive care units are operating at high capacity in mid-February. Less than half of people under age 65 had a flu injection; there is no data on how many patients in hospital care who did have a shot are suffering from a strain that differs from that in the immunization. Those over 65 were given the “three-strain” vaccine, but it’s hoped they can survive the winter without a “rogue mutation” knocking them down.

A bizarre side story to all of this is an outbreak of equine flu, which has threatened the horse-racing season in the UK and United States. Horses in Belgium, the Netherlands, and France have also contracted flu, blamed (wait for it) on an American strain called “Florida CLADE 1.” (I shouldn’t jest here, but The Epoch Times readers will know I write a lot about the rest of the world blaming every little thing on Americans.)

What is significant about 2019 equine flu is that it appears to be skirting the immunization. Dr. Richard Newton of the Animal Health Trust said, “Stopping all racing in the UK is not a decision you take lightly, but this is a highly infectious virus and it was breaking through the vaccine.”

British pop star Ozzy Osbourne, 70, has been hospitalized with complications from flu. Because “the jab” is pretty much mandatory for older folks in Great Britain, one expects this same protocol to exist in the United States and that he would have been immunized in California, where he spends much of the year. He has had to postpone his U.S., UK, and European tours because his doctor fears the “severe upper-respiratory infection” he has contracted could develop into pneumonia.

What is the answer?

An eloquent piece by Jeremy Brown in January 2019 in the British Guardian newspaper (extracted from his book, “Influenza: The Quest to Cure the Deadliest Disease in History”) examined the “endless hunt” for the perfect flu vaccine. He opened his essay with “Vaccines are one of the great success stories of modern medicine. … The flu vaccine, however … even in a good year is usually no more than 50 percent effective.”

Brown noted that his only visit to a U.S. hospital emergency department occurred when he got a nasty case of flu—after he had been given the vaccine! He pointed out that if the virus “drifts” after the February meeting of the World Health Organization, there will be a “mismatch” between virus and vaccine. In the 2004 to 2005 U.S. flu season, the vaccine was only 10-percent effective, and in 2014 to 2015 season, new strains were not included in shots—it was only 19-percent effective. In the 2017 to 2018 season, there were record levels of hospitalization.

He concluded that the “holy grail” would be a vaccine that covers all expected strains well in advance of future flu seasons and that actually needs administering only once. This is unlikely ever to happen because influenza is just “too adept at changing its disguise.”

For the time being, my humble advice is to keep those old-fashioned remedies in your medicine chest, and if flu hits even if you’ve had “the jab,” rest a lot and pray that your immune system is strong enough to throw it off.