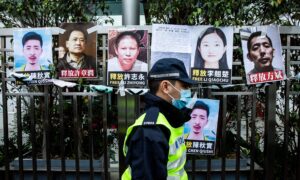 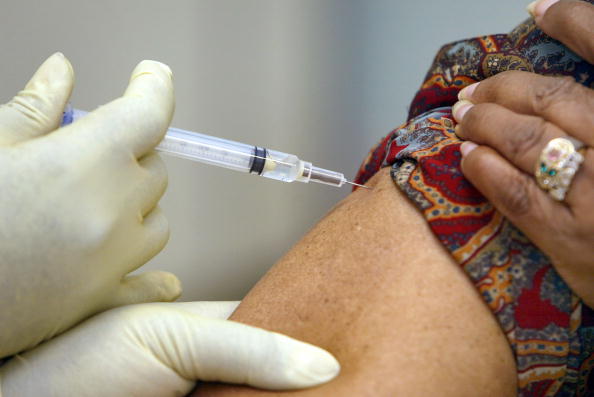 A flu vaccine is administered to a patient Sept. 26, 2002 at a health clinic in Chicago. Flu-shot season officially begins next week. (Tim Boyle/Getty Images)
Viewpoints

Are Britons Bullied Into the ‘Flu Jab?’

LONDON—You know something is wrong when on the same day two different British media giants, the respected Daily Telegraph newspaper and world-renowned broadcaster the BBC, make opposing pronouncements on their respective websites.

So, what is the story here?

Recently released findings by Public Health England (PHE) revealed that in 2017–2018, “the flu jab protected just one in 10 pensioners.” The cause was the appearance of a different strain of flu, “Japanese B/Yamagata,” in the middle of the season.

By early January 2018, PHE was reporting a 150 percent jump in cases of serious illness, causing “a significant excess” of elderly deaths. The vaccine that had been offered from the fall of 2017 simply did not cover that strain.

“Aussie flu,” which had caused so much illness Down Under, was also in the 2017–2018 season and affected scores of Britons who thought they had been assured of protection. Likewise, the United States suffered a serious outbreak of influenza in 2017–2018 that suggested patients in many age groups did not enjoy the protection they had expected from the vaccination.

The vaccine provided was more effective on younger people, but now in late 2018, the hope is that the “enhanced flu vaccine for over 65s” will have better results as it covers three strains expected by the World Health Organization to hit Britain in the current season.

The WHO predicts in March of each year what strain will strike a region in the fall/winter (I hate to call this its crystal ball, but that is how I perceive it). It should be noted that back in 2016, deaths in England jumped by 40 percent because the vaccine created by WHO scientists to cover the H3N2 virus failed in many patients; the strain had mutated to evade detection by a patient’s immune system. Government figures showed that 16,000 deaths were reported; only 577 had been reported the winter before, according to the Daily Mail.

Worried? I’ll stop there. First of all, I am not an “anti-vaxxer” who worships Andrew Wakefield, whose assertion, discredited by many in authority, that the MMR vaccine causes autism led him to be hounded out of the United Kingdom. In the UK, if you question the efficacy or safety of vaccines, you immediately become a social pariah, lumped in the public discourse with neo-Nazis, animal rights activists, and climate change deniers.

Here is my point. I would have contributed more articles to The Epoch Times these past two months had I not been strong-armed by the medical profession into having what Britons call “the jab” on Sept. 25. The national campaign to make sure a huge swathe of the population is inoculated is an aggressive, all-pervasive one–dare I say it is bullying?

One is made to feel that skirting the injection implies some sort of social deviancy. From around August, if you go to buy some sun lotion at the pharmacy, you are asked, “Have you had your jab?”

I was affected within a few hours of receiving the “over-65s three-strain” vaccine. I spent several weeks just wanting to stay in bed, in physical pain and mentally exhausted.

I lost a dear friend in the 1999–2000 “Millennium flu,” the worst worldwide outbreak in decades. Classified as Sydney H3N2, it hit the UK during the Tall Ships race, and nearly killed me. I decided to have a flu shot the following year but ended up nearly paralyzed from a bizarre condition that lasted over two years; a neurologist thought I was developing MS, but it eventually dissipated. After that, I avoided the flu vaccination literally like the plague.

I had had “the jab” in January, but in March, I had gone down with a horrific chest infection that lasted a month. The year before, I had had exactly the same chest infection and really thought I was going to die—what good did the flu jab do me?

This fall, the National Health Service (NHS) took the unprecedented step of ordering staff who refuse the flu inoculation to be redeployed. Staff looking after the vulnerable, particularly in chemotherapy units, are felt to create a risk if they are not flu-protected. However, as The Guardian newspaper on Sept. 7 reported, “Last winter 68.7 percent of frontline NHS staff—the highest proportion ever—received the vaccine, though many doubt it works.”

In conclusion, I am encouraged by a bit of breaking news from the Immunization Conference this month in Ottawa, Canada, as reported on the Cision website on Dec. 5: “The cell-based quadrivalent influenza vaccine (QIVc) was 36.2 percent more effective than standard egg-based QIVc … captured within primary care visits in people aged 4 years and above during the 2017–18 influenza season in the United States.”

The pharmaceutical company Seqirus studied data from 1,353,862 patients. Cell-based vaccines as opposed to those produced in the traditional “egg-based” process may “help reduce deaths and severe illness caused by influenza.” (It should be noted that one should not be inoculated if one is allergic to chicken or eggs.)

We have come a long way from the appalling tragedy of the 1918 Spanish flu pandemic that killed between 50 million and 100 million people worldwide, but my hope is that science will develop a vaccine to protect us from a variety of strains. It could take another 100 years—we can but hope.