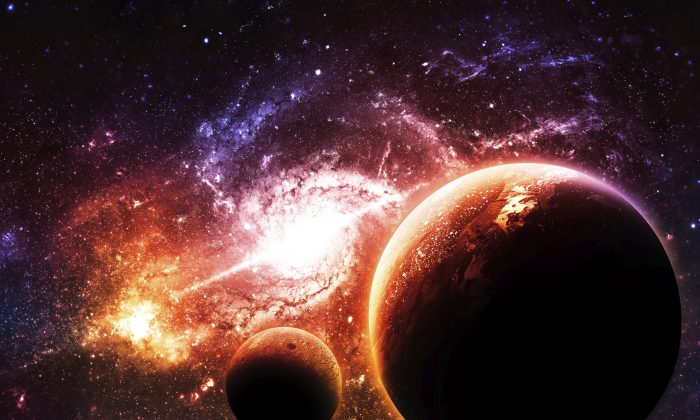 Hopkins Telescope to Examine Origins of the Universe

BALTIMORE—A journey to the beginning of the universe lurched forward Nov. 9 with a trek over just a few hundred feet.

A crew of experienced movers met with a team of scientists at the Johns Hopkins University to ferry a 4.5-ton telescope structure from a lab on the Homewood campus to a shipping container that will carry it to its permanent home, perched 17,000 feet in the Chilean desert.

They lowered the 16-foot white tower onto its side with a crane, pushed it down a hallway on wheels and lowered it from a loading dock with a tank-like forklift.

It will take another month and a half before it reaches its destination, traveling by sea through the Panama Canal and by land up winding dirt roads. Weeks after that, it will start probing the sky for signs of energy that came out of the Big Bang nearly 14 billion years ago.

While it still faces a long journey, the short move was nonetheless a big step for Hopkins’s Cosmology Large Angular Scale Surveyor mission, a $14 million National Science Foundation-backed project that will use four telescopes for five years on a mountaintop in Chile to scan for electromagnetic energy from the early universe.

“This is a really momentous transition,” said Tobias Marriage, an assistant professor of physics and astronomy who is leading the project along with professor Charles L. Bennett. “It’s a big dance, orchestration of a five-year survey.”

The telescope will explore what is known as the cosmic microwave background, the oldest light in the universe that glows faintly in between stars and galaxies. Understanding that radiation is key in explaining how the universe formed, as it shows what it was like just a few hundred thousand years after the Big Bang.

But it’s hard to find a place on Earth where you can observe the phenomenon. The CLASS telescopes, as they are known to the Hopkins scientists, will watch the heavens from the Atacama Desert in northern Chile. It’s one of the driest places on the planet and far from any big cities, which combine to mean fewer clouds and radio interference to block its view. And its elevation puts it that much closer to space.

Getting there from Baltimore isn’t easy, even without a massive telescope. As the telescope began its journey Nov. 9, Marriage was nervous.

“There it goes,” he said, as cables groaned, slowly lowering the white steel tube onto its side. “If they drop this, it would kill us. It would put us back months.”

But it came down safely. The movers lowered one end onto wheels and hoisted the other with a forklift. It glided down a hallway to the ledge of a loading dock, where a 16-ton forklift waited to lower it to the pavement and carry it across its massive arms to the shipping container.

“The key to most of these jobs is planning,” said Richard Kilduff Jr., president of Ark Machinery Movers Inc.

Ark has experience moving massive and fragile structures and pieces of equipment for the likes of the National Aquarium, B&O Railroad Museum, and the Smithsonian.

The Edgewood company typically forms a backup plan or two but didn’t end up needing it for this move. It already had handled the main structure that will hold up the telescope, which the scientists had built in Italy and shipped to Baltimore.

“In this case, Plan A worked pretty well,” Kilduff said.

Some elements of the telescope—including the instruments that are its brains—are already en route to Chile. Others were to be packed up along with the massive stand, including a set of aluminum mirrors that make up the telescope’s optical systems.

By the time the last shipment makes it to Chile in December, Marriage and other researchers will be there waiting for it. After setting it up and testing it out, they expect to start observing early next year.

The telescope won’t capture celestial images, like other ground- and space-based observatories do, but is instead looking for what is known as the polarization of the cosmic microwave background—a pattern of oscillation that scientists think will be imprinted in the waves, a product of the exponential expansion of space in the early universe.

Three more CLASS telescopes are slated to make the same odyssey, at a cost of $10,000 each trip, over the next two years. Each will look for the distant waves of energy at a different frequency.

A crew of researchers will monitor the telescopes’s observations from a facility 26 miles away, at a more hospitable 8,000 feet of elevation. The data will eventually be imprinted on magnetic tape to make the massive amounts of information more easily portable, explained Matthew Petroff, who worked on the project as a Hopkins undergraduate and will be among the research team in Chile.

Within that massive amount of information, the scientists hope to answer one big question—how it all began.