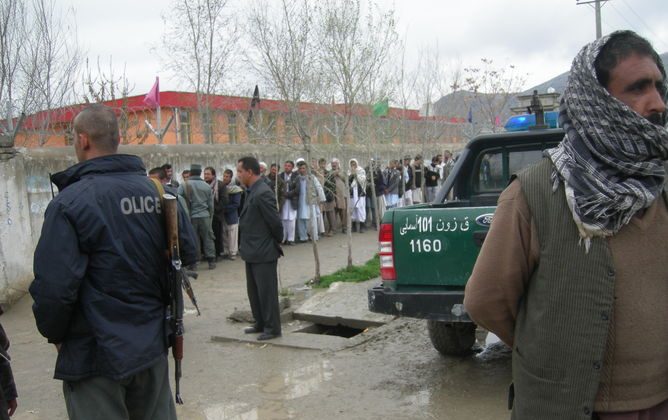 An estimated 7 million Afghans went to the polls yesterday to choose a new president. This was 2.5 million more than the last poll and represents about 60% of the electorate. This result was achieved despite Taliban threats to attack polling offices and target electoral workers. Outside the cities, there were reports of polling stations closed and at least one person is believed to have keen killed and several others injured in an attack, but on the whole this was a largely peaceful day on which Afghans took a large step towards their democratic future.

Thanks to William Maley of the Australian National University, I was able to join a team of special guests of the Afghan Independent Election Commission (IEC). Originally we had planned to leave Kabul at 6am to start the day at rural polling stations before returning to Kabul, but security measures meant that vehicles were not being allowed back into the city, so we spent the day within the city limits. We visited ten polling stations in Kabul, starting at Kheir Khanna in the North, followed by Qala e Fatullah, which is more central, and in the afternoon moving from Dashti Barchi in the west through Darulaman to Karte Nau in the East.

Although the day began rather chaotically at the first polling station we visited – the Independent Election Commission representative arrived two hours late – the professionalism of the operation was impressive. Even more impressive were the high spirits in evidence throughout the day in spite of real fears of serious attacks by the Taliban who had threatened disrupt the elections, and the heavy rain.

I spent most of my time in the women’s sections, where I learnt a number of interesting lessons about how difficult it is to really know any research site even after a year in the field.

I was surprised by the high turnout. In the days and weeks before the election, every woman I spoke to had told me they would not vote because they had no faith in any of the candidates. More than the men that I spoke to, the women seemed disenchanted and unimpressed by the candidates on offer. At a women’s day event on March 8, I spoke to a group of about 30 mostly illiterate seamstresses and asked them about their intentions.

Competing to answer the question, they assured me they wanted to be political, they wanted to vote, but they did not want to be taken for granted. And yet, here they were, women of all ages and classes, in burqas and niqabs, short coats and salwar kameez, often in family groups, frequently accompanied by their children, pushing impatiently through the gate to cast their vote – a lesson in the unreliability of sampling future intentions!

This lesson I had already learnt, but here it was underscored emphatically. Women in Afghanistan are a heterogeneous group, many of whom suffer appalling human rights abuses, but many of whom are strong, assertive, witty, clever women who enjoy working outside the home and if given the chance of employment will grab it with both hands. The competence, professionalism and pride of the electoral workers, some of whom had never worked before, was impressive. They were a mixture of young and older women and clearly enjoyed their roles. This was also true of the candidates’ agents, who watched carefully but were generally quiet and sober. In the urban centres I visited, women cast their votes freely and without coercion in a secret ballot. Afghan women are a force to be reckoned with, and will have to be catered to in future elections.

Again, long experience with Afghans young and old, educated and illiterate, had already taught me to appreciate a sense of humour that seems to be always bubbling beneath the surface, just waiting to emerge as dry irony, teasing banter or slapstick. The initial apparent reserve can crumble in a millisecond. My anguished question “but where does this queue begin or end?” was met with peals of laughter from the women voters and some suggestive responses.

When I walked past a queue of men into the men’s section, and responded to a good-natured complaint that I was in the wrong section with a smile and the comment: “Ah, but I am from mountains…” there was a great deal of hilarity and I was ushered through.

Afghanistan is still an insecure country. The security forces did an amazing job yesterday and the people responded by turning out to vote in unexpectedly high numbers. But this was only achieved by effectively shutting down the city. Traffic was virtually non-existent.

I lost count of the number of times our car was stopped and searched and our ID cards examined.

Some of the voters talked of the importance of signing the Bilateral Security Agreement as soon as the new president is installed. Even given the success of yesterday’s security operation, there is a strong sense that some international forces will be needed for the foreseeable future.

In spite of some fraud, April 5 has inspired considerable pride and is proof that, though the Taliban may have its strongholds and supporters, the majority of Afghans are tired of conflict and want peace and economic and political stability. Here’s hoping the new incumbent can rise to the challenge.

Liza Schuster does not work for, consult to, own shares in or receive funding from any company or organisation that would benefit from this article, and has no relevant affiliations.