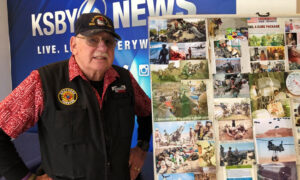 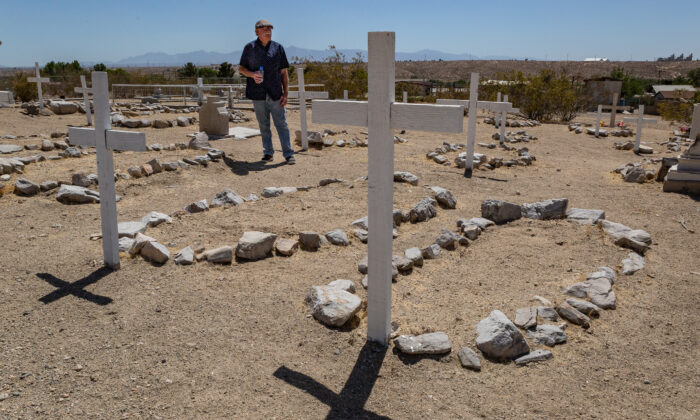 ORO GRANDE, Calif.—Over the course of his 75 years, Joe Manners has seen his hometown of Oro Grande, California, population 1,861, deteriorate nearly beyond recognition.

Once upon a time, back when nearby Victorville was little more than a ranch, Oro Grande—“big gold” in Spanish—was known for its gold mines. Now the town’s primary feature is a cement factory.

“The kid with the butch haircut looking out over the edge of the pool—that’s me,” Manners told The Epoch Times, leafing through his sizable collection of black-and-white photos and pointing out the past. “There’s a bunch of [us], back when it was still nice and beautiful. … Now, the community center’s just boarded up and barely has any grass.”

The pool from the photo is long gone. The baseball field Manners enjoyed as a child has since been abandoned; the lights that once illuminated the field at night remain dark and broken. The distinct, earthy scent of alfalfa fields has been replaced by the pungent odor generated by a nearby recycling plant. Ten-cent movie nights—along with most other community events in this town with fewer than a thousand people—are a distant memory.

Even so, Manners has stayed for so long in the place where his fond childhood memories were forged that the townsfolk now refer to him as their honorary “mayor.”

“It’s the community feeling that keeps me here. I enjoy the people here. Everybody’s nice to each other,” he said. “Even back in the day when I was a kid, everybody got along fine. Didn’t matter if you were black or white or green or whatever. I love it. I love all the folks here.”

She referred to him as “one real ray of sunshine in this metaphorically dark town.”

“He loves this town and the people when most others don’t. He is a sort of glue that holds what good is left together in the town,” Campbell said in an email.

“He receives little recognition, but he takes care of what he can and serves as a fountain of positivity simply because he wants to. … He is someone we should be talking about.”

‘He Won’t Just Pass You By’

Manners is a local legend in his unincorporated community, which can be found along historic Route 66 between Victorville and Barstow.

He habitually patronizes the handful of remaining businesses along the main strip, including Shelley’s Shop Around the Corner, where he waters the flowers on Mondays, Wednesdays, and Fridays. Cross Eyed Cow Pizza, where he arrives every morning to read the local paper, serves as his unofficial office.

“I come in the back door with the help and make myself at home,” he said.

A closer look at the menu reveals a sandwich named after him—“Mayor Joe’s”— with ingredients that include chicken salad, cashews, and mayo. “It is an honor to have food named after you, ya know,” he said, before adding that he doesn’t like any of the contents.

Every year for the past three decades, Manners has coordinated Oro Grande’s beloved Community Christmas Get-Together. He and his friends pool together enough money to provide “a really nice gift [that costs] at least $25” for every child in the community, and Cross Eyed Cow donates about 10 pizzas to feed the kids.

“I love doing the Christmas thing. Every year I say it’s the last one, but it’s not!” he said with a laugh.

Campbell added, “Most of these children wouldn’t have a Christmas if it weren’t for Joe.”

Johnnie McCain III, who manages and services the buildings along the main strip, told The Epoch Times that Manners “goes out of his way to help [people], no matter what.”

“If you need something from him, he will help you,” McCain said. “If you don’t have nowhere to go, and you [are] stuck out here, he’ll find a way to get you to where you’re going. He won’t just pass you by.”

Manners’s benevolence extends beyond the world of the living: He’s made it his primary duty to maintain the local cemetery, which, along with Pioneer Memorial in downtown San Bernardino, is one of the oldest in the county.

“I understand it’s probably the oldest cemetery in San Bernardino County. I don’t know for sure, but that’s what I’ve been told,” he said.

The cemetery likely dates back to 1865, though some suggest it’s even older. Manners estimates there are 145 graves, but said the real number could be unknown.

A few years back, a coroner friend gave Manners a call.

“We’ve got a new toy down here, and you’ve got the perfect spot to try it out,” the coroner said. The device used ground-penetrating radar technology to locate 15 unmarked graves.

The cemetery is flanked to the east by towering mountains scattered with rubble and to the west by the town’s humble houses. The wooden, white-painted crosses atop the graves are enclosed within a circular fence; each plot is outlined by an oval of sun-bleached stones. A large iron gate adorned with the letters “OG” guards the entrance.

Manners, who lives nearby, said the cemetery was closed in 1958 because the county claimed there wasn’t enough funding to maintain it.

“It’s dirt,” he said, a tick of bewilderment flashing across his face. “So I don’t know what that was about, really.”

Manners has been caring for the cemetery since 1988, when vandals broke in and defaced all the tombstones.

“They took out every cross and stuffed it in upside down. They broke all the stones that they could manage to break,” Manners said. “As a community, we came up and repaired all the damage. That’s when I started taking care of it.”

The caretaking consists mainly of hoeing the weeds, maintaining the graves, and “filling up the critter holes” created by snakes, gophers, and rodents. Manners keeps a neat stack of white crosses at the ready, in case any grave markers need replacing.

Manners provides 45-minute tours of the cemetery for anyone who’s interested; he estimates he’s given hundreds over the years. The honorary mayor has familiarized himself with most of the stories associated with the various plots, including the 8-year-old girl who died from an infected tooth, the fellow who died from a “social disease” (“could’ve been worse,” he remarked), and the last people who received special permission to be buried in the cemetery in the early 1960s.

“These are both children, and they’re the ancestors of these people right over here in the green house,” he said, pointing to a home a few hundred yards away.

As someone who spends so much time among the dead, it’s natural to wonder if it causes Manners to reflect on his own mortality.

“[I’m] not really preoccupied with death, I just want to be sure that … everything is taken care of,” he said. “I’m 75 years old now, and I just feel like I’m absolutely on borrowed time. You never know when you’re going to bite the dust.

“I wonder about who is going to take care of things like the cemetery when I’m gone, because there’s very little interest in maintaining it. People don’t, like, come and visit. Once in a while, I’ll get people to make me crosses and things like that, but not very often.”

‘The People Keep Me Here’

“I can see that Oro Grande’s going nowhere,” he said. “You invite someone up and they have to drive through the ghetto to get to my house—which is also in the ghetto, but it’s a little nicer part of the ghetto. … just a couple of doors down from the cemetery.”

Recently, he said, he received a “really nice” offer on his house, which his father built with his own hands in 1946, the year Manners was born.

“I would just like to go somewhere not too far away. Big Bear sounds good to me,” he said. “I’d like to go up there where it’s cool and green. … That way, I could still come down here and take care of Oro Grande and Christmas for the kids, things like that.”

But, he added dismissively, “I’ve been thinking about it for 20 years.”

Despite being what he suspects to be “the most neglected, most underfunded little town in the High Desert province,” Manners relishes the camaraderie and warmth of his community.

“Like I say, the people are what keeps me here,” he said.