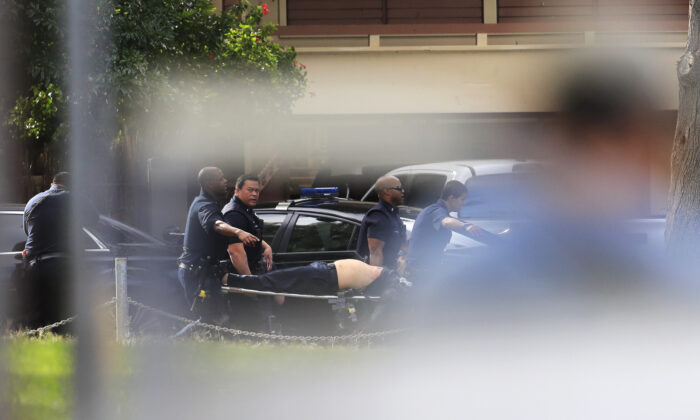 Honolulu police carry an injured fellow officer after a shooting and domestic incident at a residence on Hibiscus Road near Diamond Head in Honolulu, Hawaii, on Jan. 19, 2020. (Jamm Aquino/Honolulu Star-Advertiser).
Crime and Incidents

The attorney of the man accused of fatally shooting two Honolulu police officers on Jan. 19 has told local media the suspect has a history of mental instability and disagreements with neighbors.

Jerry J. Hanel shot dead the officers as they responded to a domestic violence call in the area of Diamond Head with a third officer. According to Hawaii News Now, police reports allege the 69-year-old stabbed his 77-year-old landlord, Lois Cain, in the legs.

He then set off a raging fire that destroyed at least seven homes and damaged others in the area, local media said.

In a news conference on Sunday, Police Chief Ballard identified the officers as Tiffany-Victoria Enriquez and Kaulike Kalama, both of whom had been with the force for less than 10 years.

Ballard said that in addition to the officers deaths, two other females were missing from a house that was burned down in the area. They were last seen in the home.

Hanel’s attorney, Jonathan Burge, told Hawaii News Now that Hanel had a history of mental illness, including delusions that he was being tracked by the Secret Service and FBI, but had declined suggestions that his client sought treatment.

Hanel had also allegedly been charged with assault for shoving a neighbor but was subsequently acquitted, Burge said, adding that he had no indication that Hanel was capable of extreme violence.

Ballard said that Hanel did not have a firearms permit for the gun he used to shot the officers.

Burge said that Hanel had lived rent-free in the lower floor at the Hibiscus Drive home where the shooting took place and that he had forged a friendship with Cain.

Burge said that Cain had repeatedly helped Hanel out despite him having a number of issues and disputes with his neighbours but had recently asked him to leave the property as she planned to move house.

Hawaii News Now said it had obtained court documents showing the landlord had secured an eviction order from a court to remove Hanel from the property on Jan. 17 and that these documents contained complaints that Hanel had no rental agreement, had caused damage to the property, and had refused to leave despite demands multiple occasions.

His eviction was to be confirmed in court next week and he was scheduled to appear in court on Jan. 21 for a separate misdemeanor charge in which he reportedly made a fraudulent 911 call, the outlet added.

Despite this, Burge said he believed that his client had been preparing to vacate the property peacefully.

In Sunday’s news conference, Ballard said that police were aware of Hanel and had responded to a number of incidents at his residence in the past.

Hanel is presumed dead, but authorities said they are still searching for his body and the weapon. The fire has now been totally extinguished by the fire department.

“I would like to express my deepest condolences to the family and friends of the two officers as well as the entire Honolulu Police Department. This is an unprecedented tragedy for not only the City and County of Honolulu but the entire state of Hawai’i,” he wrote.

Thoughts and prayers from everyone @UplandPD. We grieve with @honolulupolice, the family and friends of officers Tiffany Enriquez and Kaulike Kalama https://t.co/0eyFe1OqFD

“Our office is in communication with the Honolulu Police Department as more details about the circumstances around this horrific event come to light. Our hearts go out to the first responders who are on the scene as this event unfolds.”

Hawaii Rep. Tulsi Gabbard (D), who is also running for the 2020 presidential campaign, said on Twitter: “My heart is with the Enriquez & Kalama families, and their fellow officers, in the wake of this tragic shooting. They responded to a call for help, and paid the ultimate price. To the first responders still at the scene working to protect others from harm, thank you and be safe.”