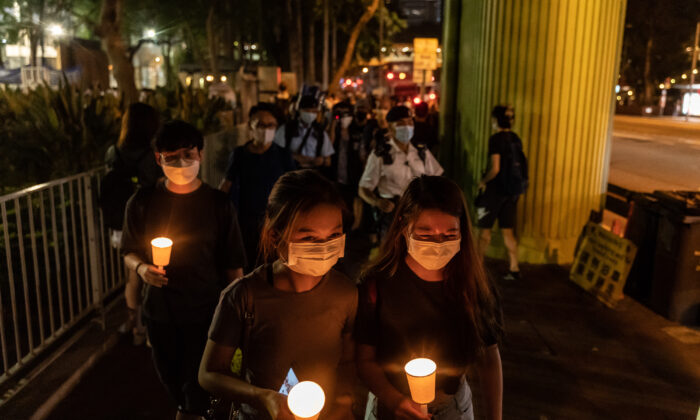 People hold candles as they walk near Victoria Park after police closed the venue where Hong Kong people traditionally gather annually to mourn the victims of China's Tiananmen Square crackdown in 1989, in the Causeway Bay district in Hong Kong on June 4, 2021. (Anthony Kwan/Getty Images)
Thinking About China

In mid-April, 2022, a friend introduced me to a U.K. Hong Kong community head, who talked to me about shooting a special program on Queen Elizabeth II and Hong Kong for the Platinum Jubilee celebration. After going through that, we shifted the topic to the June 4, 1989, Tiananmen Square massacre (June Fourth). I was told that a candlelight vigil would be held on June 4, 2022, outside the Chinese Embassy, in London, and I was asked what else might be done for the June Fourth commemoration, a taboo now in Hong Kong and only possible abroad.

Half seriously, I shared an idea that I thought wild. ‘Forum. Got to be a forum, like the City Forum that used to be held every Sunday at Hong Kong’s Victoria Park.’ It is my wish to inherit the cultures of Hong Kong in the U.K., and the ‘Victoria Park culture’ is really essential to mark the rise of the civil awareness coming with the historical June Fourth candlelight vigil and City Forum. The National Security Law (NSL), imposed on Hong Kong by China in 2020, has ruined all of them. Can we bring them back to life in the U.K.? We also have Victoria Park here in London, whose speakers’ corner—known as the Forum—was more popular than that in Hyde Park at a time.

Unexpectedly, they took my wild suggestion serious. Starting from scratch, they sorted out a venue, potential speakers and production team, and organised all the things seamlessly. The shooting was done last week.

The experience was simply amazing, though some modifications from the original needed to be made, and the program was pre-recorded with no live audiences. Doing it live would certainly attract attention from pro-Chinese Communist Party (CCP) groups and add uncertainties to the event. No one wanted to take that risk.

Copying and reviving a ‘well-rooted’ cultural phenomenon to any given place is enterprising but formidable. ‘Well-rooted’ is not an exaggeration, especially to those who joined the June Fourth candlelight vigil every year for the last 30 years. An anecdote may illustrate this well. In 2012, in the first cohort of Hong Kong Diploma of Secondary Education (HKDSE) History course, which at that time had a component of school-based assessment offering three electives, in which one was called ‘local heritage studies.’ I came across a School-based Assessment report on this elective that studied the June Fourth candlelight vigil. From this we can see that, at least to some youngsters in Hong Kong, June Fourth celebration is well established as a local heritage/commemorative festival.

There is no doubt about the importance of June Fourth to Hong Kong and China as a landmark of political change. In the 1980s, the Chinese were eager to introduce ideas of all kinds from the West. However, after June Fourth, there was a sharp ideological turn as the CCP adopted a more leftist stance in view of the perceived ‘peaceful evolution’ and ‘imperialism’s incessant desire to crush China.’ This was followed by severe criticism of universal values, liberalism, democratic constitutionalism and historical nihilism (seen by China as attempts to revisit or challenge the official version of history). Anti-foreignism intensified, followed by the rise of a ‘wolf warrior’ stance (Chinese patriots, usually high-ranking officials and celebrities, using strong rhetoric and social media to present an image of an assertive China) and ‘little pink’ (young and hyper-nationalist Chinese keyboard commandos).

Against this backdrop, commemorating June Fourth in Hong Kong becomes more and more intolerable to communist China, as it is closely related to the idea of ‘using democracy to resist communism.’ Political beliefs of Hong Kong and China become incompatible over June Fourth.

To Hongkongers, a democratic China is a logical development and a guarantee for the ‘One Country Two Systems.’ To the Chinese, however, as the June Fourth incident had been labelled as a ‘counter-revolutionary rebellion,’ Hongkongers’ urge to ‘vindicate June Fourth’ —a slogan that has been there for more than 30 years—is understood as subverting Chinese state power.

Naturally, the most historical target of the NSL is the Hong Kong Alliance in Support of Patriotic Democratic Movements in China, the very organisation that was founded right before the massacre, to provide shelters and financial assistance in helping to smuggle Beijing student leaders out of China. Obviously, this shows that June Fourth commemoration in Hong Kong has long been a thorn in the side of the CCP; with huge political impact and something that they consider needs to be uprooted.

Irrespective of one’s identity and position in the political spectrum, commemorating June Fourth is a righteousness for all who uphold and fight for justice and consciousness. My co-workers’ efforts to produce the June Fourth Forum in just one month manifest our commitment to democracy and universal values. The forum will be released on June 1, 2022 and those who are interested to watch it, please click here.