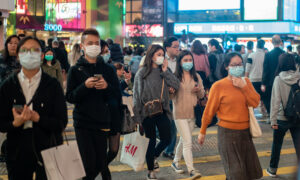 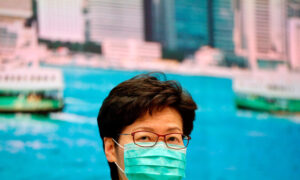 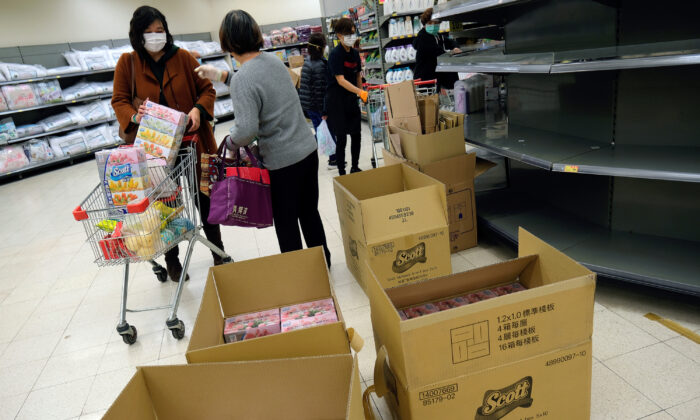 Customers wear masks as they pick facial tissues in a supermarket, following the outbreak of a new coronavirus, in Hong Kong, China on Feb. 7, 2020. (Tyrone Siu/Reuters)
HK Current Affairs

HONG KONG—Panicky Hong Kong residents scooped noodles, rice, meat and toilet paper into shopping carts on Feb. 7 despite government assurances of ample supplies during an outbreak of a new coronavirus that started in mainland China.

Chinese-ruled Hong Kong has reported 25 cases of the fast-spreading virus and one of only two deaths outside mainland China.

“Everyone’s snatching whatever they can get. I don’t even know what’s going on,” said a 72-year-old woman surnamed Li as she clutched two bags of toilet paper.

The government has condemned “malicious rumors” about shortages which have led to panic buying “and even chaos,” while supermarkets have put limits on the amount of products, including antiseptics, that people can buy.

But hundreds of shoppers thronged city supermarkets again on Friday, loading up their shopping carts.

Panic also hit Taiwan the same day, with local media reporting supermarkets having their shelves cleared on rumors that stepped-up production of face masks would lead to a shortage of raw materials to make toilet paper.

“This is totally false … the raw materials for toilet paper and face masks are different. Please do not believe rumors,” President Tsai Ing-wen wrote on her Facebook page.

Hong Kong’s health scare comes after months of pro-democracy protests in the former British colony over fears its special autonomy is being whittled away by Beijing.

Worry over the virus has led to new friction, with many people, particularly medical workers, demanding that the city government seal the border with the mainland.

Hong Kong has closed some cross-border links but has said completely sealing it would be inappropriate, impractical and discriminatory.

On Saturday, Hong Kong will introduce quarantine for two weeks for all people arriving from the mainland, or who have been there during the last 14 days.

Matthew Cheung, chief secretary for administration, said that Hong Kong people returning from the mainland must stay home for a fortnight or risk a HK$25,000 ($3,200) fine and 6 months’ jail.

Non-Hong Kong residents must stay in government isolation centers or hotel rooms for the same period, facing the same penalties.

“Self discipline and having everybody in Hong Kong fighting … this infectious disease is the most important thing,” said Sophia Chan, the city’s health secretary.

Thousands of hospital workers, who had been on strike this week to press the government to close the border, voted to suspend their action on Friday night.

They said they would continue to pressure the government for tighter measures, however.

City authorities said they were conducting checks for the virus on a quarantined cruise ship carrying some 3,600 people that docked in Hong Kong this week.

Health officials are trying to trace people who had traveled on the ship, many of whom disembarked in Hong Kong in January.