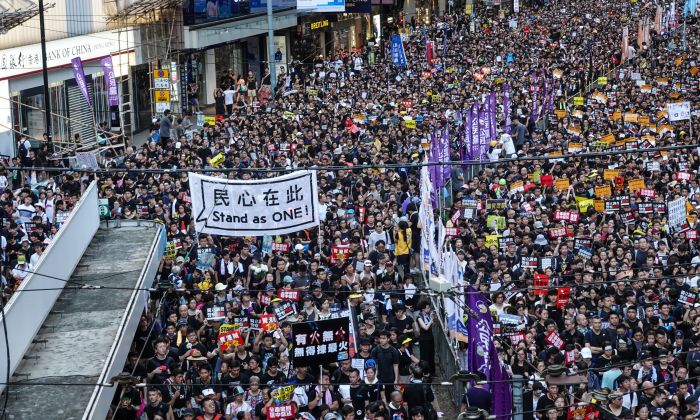 The ongoing protests against a controversial extradition bill in Hong Kong is the largest social movement the city has ever seen.

The bill, which would allow mainland China to seek extradition of criminal suspects, drew widespread opposition, with many fearing that the proposal would allow the Chinese regime to punish its critics on trumped-up charges.

The Hong Kong bureau of The Epoch Times has been covering the latest developments nonstop.

“The Epoch Times is the best media in reporting about the extradition bill and related events,” Hong Kong senior banker and university professor Ng Ming Tak told the local bureau of The Epoch Times in a July 5 interview. “You guys have devoted a lot of resources and professional staff to report the news from different angles, which includes politics, economy, people’s livelihood, society, culture, and even religion. You present all the facts in front of readers and they can see what’s the truth and analyze by themselves.”

Hong Kong’s media landscape has increasingly become dominated by outlets with a pro-Beijing or pro-establishment slant.

The Epoch Times remains one of the few independent media outlets in the city.

“I believe that more and more Hong Kong media are being controlled by pro-Beijing forces, and less and less independent sounds can be heard,” Simon Lau Sai Leung, a senior reporter, told The Epoch Times on July 5. “The Epoch Times is an independent media that reports the news from Hongkongers’ standpoint.”

Most recently, on the anniversary of Hong Kong’s handover from British to Chinese sovereignty on July 1, there were simultaneously a peaceful march joined by roughly 550,000 as well as a more violent besieging of the legislature building that saw hundreds of protesters storming into the building in the late evening.

The following day, the front page of most Hong Kong newspapers chose to focus on the besieging. Only The Epoch Times gave front page treatment to the peaceful protest march.

“550,000 Hongkongers paraded against the extradition bill is the most important event on that day… A few protesters who broke into the legislature diverted attention from the whole protest. But I know what I should focus on,” said Ng.

Since locals began to protest the extradition bill, The Epoch Times’ Hong Kong reporters have devoted many hours to covering the topic.

“Our reporters have worked so hard and have barely slept during these weeks. While reporting on the police dispersing protesters who surrounded the legislature [on June 12], some of our reporters were also hit by the pepper spray,” Kwok added.

The Epoch Times also live-broadcasted the one-million-strong march on June 9 and the nearly two million Hongkongers who protested on June 16. On July 1, The Epoch Times live-streamed for more than 24 hours, beginning with the parade, then the besieging—from the moment protesters repeatedly rammed the glass doors with different implements, until they broke in and stormed inside. At 4 a.m., when Hong Kong’s top official Carrie Lam held a press conference to address the besieging, The Epoch Times also live-streamed.

Different bureau offices around the world also cooperated with the Hong Kong bureau to provide more complete coverage of the issue. For example, reporters from different countries interviewed their local officials, economists, and commentators to analyze the political situation and its impact.

“After the million people’s protest, [the Chinese-language] Epoch Times interviewed many American officials. Their voices of concern and support encouraged Hongkongers,” Kwok said.

In 2001, The Epoch Times began producing a local Chinese-language newspaper. Going from a bi-weekly paper to a weekly paper, the local Epoch Times went daily in January 2005.

“We have guarded this city for almost 20 years [by reporting the truth], and have never given up,” Kwok said.

Kwok has worked in the media industry for more than 30 years, beginning as a reporter during British Hong Kong. Having witnessed so much change in the city, she realized how important it was for the media to cover those changes truthfully.

The Epoch Times has continuously covered how Beijing has meddled in the city’s affairs since the handover in 1997, violating its promises to preserve Hong Kong’s autonomy and freedoms under the “one country, two systems” model.

For such reporting, The Epoch Times has received threats and interference from local pro-Beijing organizations.

“We can hardly find a printing house who dares to print our paper. Our employees were followed by Chinese agents, and had their personal security threatened. Our clients were also threatened by Chinese authorities. The owner of a conference venue we had booked cancelled our contracts after being pressured by the Chinese regime,” Kwok said.

On the evening of Feb. 28, 2006, four men broke into the Epoch Times’ Hong Kong printing press and destroyed the newly bought printers, which were valued at more than one million Hong Kong dollars ($12,840). On May 30, 2013, the printing press was attacked again.

Until now, Hong Kong police have not located the suspects.

In the past, many prominent Hongkongers have praised The Epoch Times’ commitment to truthful reporting.

“It’s really hard to find a media outlet that has a conscience and has been brave enough to report the truth for so many years in Hong Kong,” said former lawmaker Lam Wing Yin in a December 2015 interview.

Joseph Cheng Yu-shek, former political science professor at the City University of Hong Kong, once described The Epoch Times thusly: “The Epoch Times adheres to the spirit of truthfulness.”

“You are a model to Hongkongers who still want to have an independent opinion,” said Hong Kong Cardinal Joseph Zen Ze-kiun in a March 2016 interview.

“The Epoch Times has connection with many senior-level insiders within mainland China. It has reported on some events earlier than other media outlets. For example, the sacking of [former CCP senior officials] Wang Lijun and Bo Xilai, then the sacking of Xu Caihou [former vice-chairman of China’s Central Military Commission, the top Party agency in charge of the military].”

This article has been updated to reflect that Joseph Cheng no longer serves at the City University of Hong Kong. The Epoch Times regrets the error.