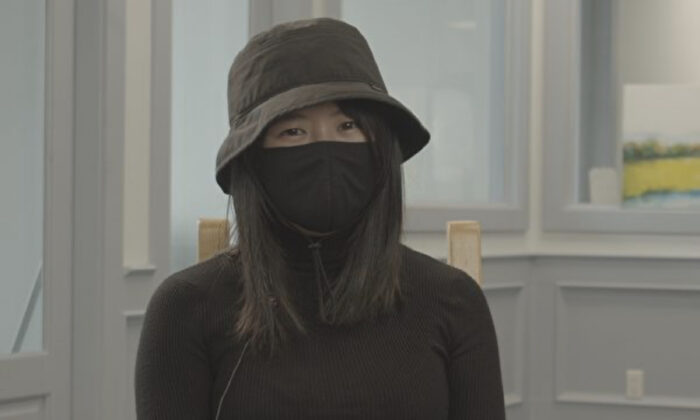 Wong Yee was a proactive Hongkonger during the 2019 anti-extradition protests before getting arrested by the National Security Police. She is now in Vancouver as an asylum seeker, no longer living in fear. Wong said CCP has destroyed the future of the Hong Kong youth. (Photo by Melodie Von, NTD)
Hongkongers' Story

Wong Yee, an exile who used to frequent anti-extradition protests as a backup for her comrades, has recently fled to Vancouver, Canada.

Wong recalled protesters’ daily terrors, “You will always be wary of whether the police will suddenly show up right next to you, subdue you and arrest you. That anxiety has always been in the mind of every protester on the streets of Hong Kong.” In the interview, Wong condemned the Chinese Communist Party (CCP) for tarnishing the future of Hong Kong Youth.

Wong revealed why her family still didn’t know the real reason for her leaving Hong Kong, “They thought I had a job opportunity in Canada. They were expecting my return in a couple of years.” Unfortunately, that was far from the truth. Wong left because she was arrested by the national security police, due to assisting Hongkongers fleeing overseas. Once she was granted bail, she left for Canada and applied for political asylum.

During Wong’s recollection, she shared that she had been proactive in the Hong Kong anti-extradition movement since 2019. Later that year, she became a full-time supporter, to back up young people who were affected by the movement until 2021.

One day in 2021, Wong was arrested at her home by the Hong Kong National Security Police. She was accused of secession, and with money laundering to help Taiwan become independent from China. For the rest of the following year, she had to report to the police station frequently. After a while, the Hong Kong Police lowered her bail conditions, so traveling overseas was no longer restricted. She then left Hong Kong and arrived in Vancouver in February 2022. However, there was a catch: Wong, although she could leave Hong Kong, the Hong Kong Police were still investigating her crimes of violating the national security law: they insisted they would not drop the charges against her.

Wong told the Epoch Times interviewer that being an exile at a young age for Hongkongers is not easy. The lack of life experience, skills, and money are often hurdles for people who flee from the national security law.

Being a Backup is Considered Secession

Wong commented on the 25th anniversary of the Hong Kong Handover to CCP, “There is nothing to celebrate. We can all see that Hong Kong is about to reach its end. We can only pray for safety for the rest of the 25 years.” At first, when CCP took over Hong Kong, Beijing claimed that the rule of law, lifestyles, freedom, autonomy, and democracy would not change for 50 years.
“To Hongkongers who have become exiles, July 1 is a sad day. They couldn’t stay in Hong Kong to witness the bad; They could only pray for Hongkongers from afar and hope that they could continue to live their best possible life, under the current circumstances.” Wong said with a deep sigh. She said everyone knows Hong Kong has been torn apart.

Where is Our Future?

Looking back on supporting her Hong Kong comrades, also commonly known as “siblings” or “brothers and sisters” among Hong Kong protesters, Wong Yee said she had met with a lot of Hong Kong “siblings” who had been arrested or jailed. When she was backup support for the protest arrestees, Wong witnessed their markings of blood, being beaten, or disabled features from their arrests. That was the moment when she began to truly understand and aid them well.

“One of the ‘siblings’ was beaten by the police with his head covered with a bag. He had fractures in several places, was blinded in one eye; He had not received proper medical treatment, and yet remains in solitary confinement to this day. He is alone with four walls every day. He has no one to talk to, it is a living hell for him.”

Wong also came across youngsters who remained cooperative when being arrested and subdued, but the police would keep on beating them with batons until their blood shed. “The police would then lie in court, saying he used his baton because the person was resisting the arrest.”
Having witnessed all kinds of injustice, Wang Yee expressed her thoughts, Our crime is being young and having expectations from our society. That is why we are thrown in jail. The CCP tarnished young Hongkongers’ future. We have no plans, no future, because of the regime.”
Wong continued,  “As a Hongkonger, we don’t have much hope or future to talk about. The saddest part is we are supposed to have our rights and opportunities, but they have been taken away by the Hong Kong government.”

Wong Yee shared that at the time she was just trying to help as many protesters as she could. It was her basic traits and truth as a human being. “If it was in China and you were seen helping people, you would be the one who gets sued. Helping others is part of being human: it is your responsibility to help the weak and the old. That is just basic moral value of a human being.”

Canada equals safety; pro-communist loyalists are the unwanted rats in the alley. Having been in Canada for the past few months, safety is the most she feels, “The Canadian government allows their people to voice their opinions freely. The Canadian Police Force is here to help maintain order and protect the protesters, unlike the Hong Kong Police Force. Whenever we have an assembly or protest here in Canada, Chinese loyalists might still show up, but they are a lot more subtle, unlike the ones in Hong Kong. If they walk around and chant “Hail the CCP”, they will have to zoom away like rats in the alley. We don’t have to be terrified of them here in Canada.”

What Are Wong Yee’s Final Words?

“Hongkongers have experienced enough of the CCP’s evil doing. We should be encouraging each other and moving forward as one. We have lost too much already.”