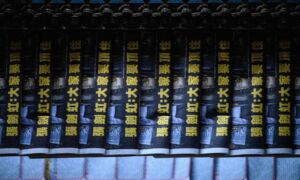 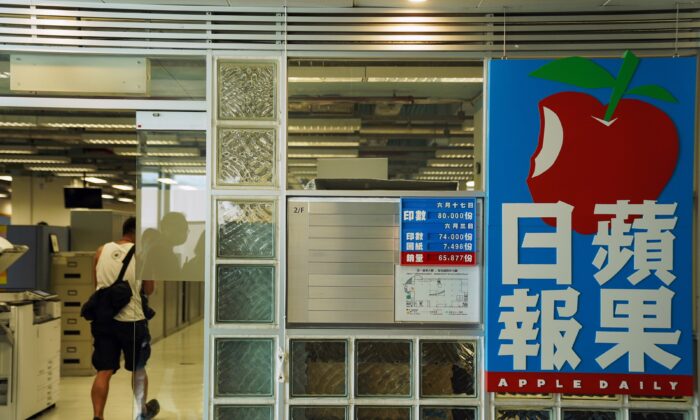 An employee walks at the offices of Apple Daily and Next Media after police raided the newsroom, in Hong Kong, China, on June 17, 2021. (Lam Yik/Reuters)
Hong Kong

HONG KONG—Hong Kong’s pro-democracy newspaper Apple Daily said on Sunday the freezing of its assets in a national security probe had left the newspaper with cash for “only a few weeks” of normal operations and it may struggle to pay staff wages.

The newspaper, whose chief editor and chief executive have been detained under the new security law and whose offices were raided by 500 police officers on Thursday, said the announcement was made in a management meeting on Friday.

Three companies related to Apple Daily are also being prosecuted for collusion with a foreign country and authorities have frozen HK$18 million ($2.3 million) of their assets.

Apple Daily plans to ask the government’s Security Bureau to unfreeze the assets on Monday and failing that attempt, it may look to challenge the decision in court, the newspaper reported.

“The freezing of the assets of the three companies not only affects payrolls, but also normal newspaper operations,” it said in an article. “It is understood that the company only has enough cash to continue normal operations for several weeks.”

Apple Daily is also reviewing its stocks of ink and paper, it said.

Police have said dozens of Apple Daily articles were suspected of violating the national security law in the first case in which authorities have cited media articles as potentially violating the contentious legislation. Editor-in-chief Ryan Law and chief executive officer Cheung Kim-hung were charged with collusion with a foreign country and denied bail on Saturday. Three other senior executives were also arrested on Thursday and released on bail on Friday.

Apple Daily and its listed publisher Next Digital have come under increasing pressure since its tycoon owner and staunch Beijing critic Jimmy Lai was arrested last year under the legislation.

Lai, whose assets have also been frozen under the security law, is already in jail for taking part in unauthorized assemblies.

The arrests and scale of the Apple Daily raid have been criticized by Western nations, global rights groups, press associations and the chief U.N. spokesperson for human rights.

Western governments and lawmakers condemned the raid, saying it showed Beijing was using a draconian national security law to suppress dissent and silence free press in the city.

U.S. Sen. Rick Scott (R-Fla.) in a statement on Twitter urged U.S. President Joe Biden and other democracies to condemn “this disgusting attack on the free press” and hold the Chinese Communist Party (CCP) accountable. Sen. Marco Rubio (R-Fla.), meanwhile, called for the release of the arrested executives, as well as founder Lai.