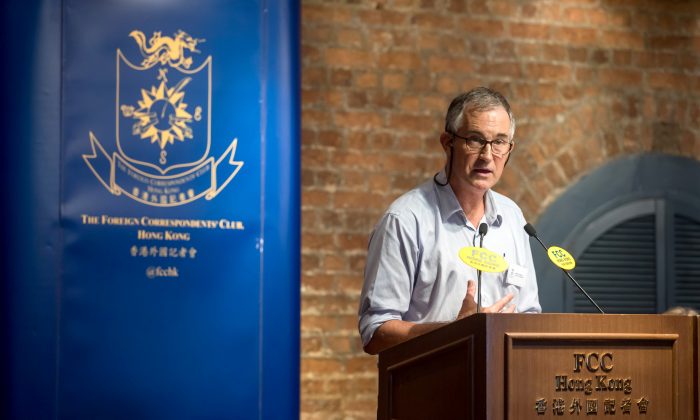 Victor Mallet, a Financial Times journalist and first vice president of the Foreign Correspondents' Club (FCC), speaks during a luncheon at the FCC in Hong Kong, China on Aug. 14, 2018. (Paul Yeung/Pool via Reuters)
Hong Kong

HONG KONG—Several Hong Kong media and legal groups called on the government on Oct. 8 to explain why it refused to renew a work visa for a western journalist who hosted a speech by an independence activist, raising questions about media freedoms.

It came two months after government officials in China and Hong Kong condemned the FCC for hosting a speech by an independence activist, Andy Chan, reigniting debate about the viability of the city’s promised freedoms. Mallet chaired the event.

The visa refusal, which the Hong Kong Journalists Association said was unprecedented, drew criticism from the United States and the American Chamber of Commerce in Hong Kong.

“The rejection of a renewal of work visa for FT correspondent Victor Mallet sends a worrying signal,” AmCham president Tara Joseph said in a statement.

“Without a free press, capital markets cannot properly function, and business and trade cannot be reliably conducted. Any effort to curtail press freedom in Hong Kong could damage Hong Kong’s competitiveness as a leading financial and trading center.”

Parts of Hong Kong were brought to a standstill in 2014 by student-led street protests demanding full democracy in the city, demands that weren’t fully met. Since then, authorities have sought to smother the youth democracy movement with a number of pro-independence and democracy activists now jailed.

Calls for outright independence are a red line for China’s Communist Party leaders, who deem the global financial hub to be an inalienable part of the nation.

The journalist groups took a petition with more than 7,000 signatures to the city’s government headquarters, calling on authorities to explain exactly why Mallet’s visa wasn’t renewed and to “rescind their decision.”

The Hong Kong Immigration Department gave no immediate response to a request for comment.

Mallet, who was traveling away from Hong Kong when his work visa renewal was refused, was allowed back into the city on Oct. 7. But he was only granted a seven-day tourist visa, rather than a six-month visa that is usual for British nationals.

“Immigration officials did not provide an explanation for the shortened visitor visa, and we continue to seek clarification from the Hong Kong authorities about the rejection of his work visa renewal,” the FT said in a statement on Oct. 8.

“We would not speculate on the reason behind such rejection, but we do wish to point out that such rejection calls for an explanation in light of its unprecedented nature and its profound impact on Hong Kong’s press freedom,” the statement from the lawyers read.