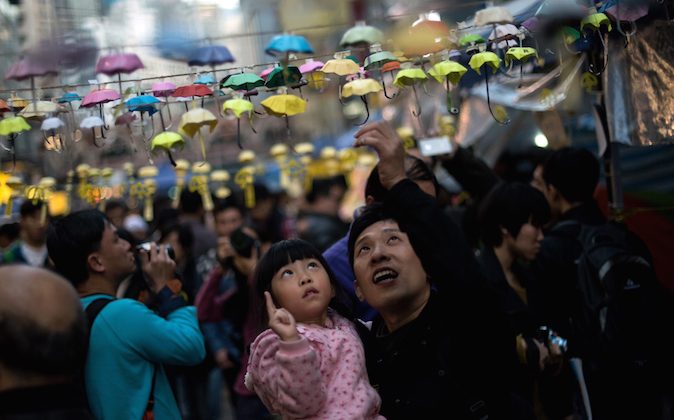 A man and his daughter pose for photos next to an installation of paper umbrellas -- symbols of the pro-democracy protests in Hong Kong -- in the Causeway Bay district of Hong Kong on December 14, 2014. (Alex Ogle/AFP/Getty Images)
China

Police will move in Monday on the final Umbrella Movement protest site. The student protesters, however, are already thinking beyond the occupation phase of the pro-democracy demonstrations.

A tiny (100 yard) protester encampment on a side of Hennessy Road and Yee Wo Street, Causeway Bay is all that remains of three main occupation camps.

Unlike the larger Admiralty and Mong Kok sites, where thousands of tents and makeshift structures, shelters, and barricades were erected, the Causeway Bay “orphans” have only dozens of tents, banners, posters, and strings of small paper umbrellas on a modest sliver of street.

The character of the Causeway Bay crowd is also starkly different. BBC reports that Hongkongers have likened the three sites to heroic figures in the Chinese literary classic “Romance of the Three Kingdoms.”

Admiralty is compared to the ruler Liu Bei, because student leaders and pan-democrats frequent the site to make rallying speeches.

The unruly, raucous Mong Kok folk have been compared to Zhang Fei, a boisterous general.

Because the small Causeway Bay crowd have endured isolation and lack of attention the Admiralty and Mong Kok sites were active and grabbing the headlines, they have been compared to general Guan Yu, a righteous, loyal general who never surrendered.

However, even loyal generals know when to beat a tactical retreat.

The gentler Causeway Bay protesters, who have expressed displeasure that their enclave has been “hijacked” by “democracy tourists” from the two cleared sites in the past few days, have been slowly packing up supplies in preparation to leave when police show up Monday, 9:30 a.m. local time (Sunday, 8:30 p.m. Eastern Standard Time).

Police spokesman Steve Hui said Saturday that police will disperse the “illegal road occupiers” if they refuse to leave. In a statement Sunday, police further urged “relevant protesters” to cease their “selfish and malicious acts,” and promised to arrest those who obstruct them.

About 800 police officers will be mobilized to shut down the site, local broadcaster TVB reports.

Although at least 10 Causeway Bay regulars vow to stay and be arrested, others have decided to call it a day for now and prepare for the next fight.

“As we have yet to overturn the Standing Committee of the National People’s Congress’s (NPCSC) Aug. 31 decision, now is not the opportune time to be arrested,” said Liu, a student, to TVB.

The NPCSC ruled that while Hongkongers can have universal suffrage for the 2017 Chief Executive elections as long as the candidates are picked by a pro-Beijing nominating committee.

Liu added that he might consider protesting again if the second round of consultations over political reform in Hong Kong results in similar restrictions on Hong Kong citizens’ democratic rights.

Student leaders from the Hong Kong Federation of Students and Scholarism, two prominent groups in the Umbrella Movement have expressed similar sentiments to Liu.

Alex Chow, secretary general of the HKFS, said that he won’t rule out a move to occupy the Hong Kong Legislative Council in the event a repressive law such as Article 23 is tabled, Passion Times reports. Article 23 is a proposed anti-subversion law that would curb Hong Kong citizens’ rights and freedoms if passed. It was tabled in 2002 but was shelved indefinitely after the public staged massive protests and petitions.

Scholarism spokesman Oscar Lai said in a radio interview that his student group aims to stage small scale protests if the Hong Kong government doesn’t carry out a proper consultation on political reform next year with student and pan-democratic groups.

Apart from staging additional sit-ins, the HKFS is considering shifting to non-cooperative action as a form of protest.

Non-cooperative action can take the form of paying taxes with multiple checks or paying public housing rentals at the eleventh hour.

“We will cooperate with organizations in different communities so as to initiate different non-cooperative movements,” Alex Chow said, according to local broadcaster Radio Television Hong Kong.

“Of course, we understand that not everyone could take part in the Occupy movement so we need more varied action to draw people in and let them fight back.”

In response, Hong Kong Secretary for Justice Rimsky Yuen said that democracy and universal suffrage can only be attained by “lawful and legal means,” and urged the public not to heed the HKFS’s proposal.

Meanwhile, a group of protesters are still carrying on the “Shopping Revolution” in Mong Kok. Numbering in the low hundreds, these demonstrators use flash mob tactics to occupy sidewalks in the commercial district on the pretext that they are following Chief Executive Leung Chun-ying’s orders to shop in the area after the Mong Kok site clearance.

At present, it is unclear how long the “shoppers” intent to keep up their protests, or what their follow up course of action is.