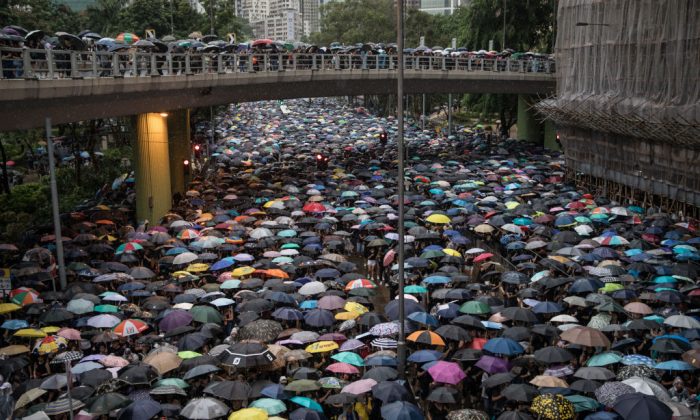 Hundreds of thousands of protesters march on a street after leaving a rally in Victoria Park in Hong Kong on Aug. 18, 2019. (Chris McGrath/Getty Images)
HK Current Affairs

Protesters in Hong Kong are planning to stage a local version of a “human chain” demonstration, inspired by one that took place 30 years ago among Baltic nations that sought to break away from communism.

The proposal, first suggested by a user on the Reddit-like LIHKG forum that’s popular with protesters for planning future demonstrations, calls for people to gather at 7:15 p.m. local time on Aug. 23, along sections of three major metro lines in Hong Kong: the Island, Kwun Tong, and Tsuen Wan lines.

It isn’t currently known how many people plan to participate in the event.

People will hold hands to create three human chains—one on Hong Kong Island and two in the New Territories area—echoing the peaceful protest known as the “Baltic Way” that occurred on Aug. 23, 1989.

Seeking to draw global attention to their desire to declare independence from the Soviet Union, about 2 million Estonians, Latvians, and Lithuanians joined hands to form a human chain roughly 420 miles long, linking the capitals of the three countries: Tallinn, Riga, and Vilnius. Seven months later, in March 1990, Lithuania became the first of the Soviet states to declare independence.

The LIHKG user nicknamed “Spring Bug,” who started the online thread, estimated that the total length of the three chains would be more than 30 kilometers (18.6 miles).

“The three Baltic states showed the world that they were united. Hong Kong residents are also united. All five of our demands must be met, particularly the most important of all: universal suffrage,” wrote the LIHKG user.

Mass protests have entered their 11th consecutive week, as Hongkongers’ initial demand that the city government fully withdraw an extradition bill has ballooned into five demands, including universal suffrage in the city’s elections, as well as an independent investigation into police actions while dispersing protester crowds.

Locals fear that the now-suspended bill, which would allow anyone in Hong Kong to be transferred for trial in China, could threaten the city’s judicial independence, as the Chinese regime’s judicial system is known for targeting its critics and dissidents.

On Aug. 18, more than 1.7 million Hongkongers defied a police ban and marched in the heart of the city’s busiest districts to call on the city government to meet their demands.

Since June, Hongkongers have taken different approaches to try to drum up international attention. Most recently, on Aug. 19, a group of protesters placed advertorials in 11 newspapers in 10 countries, after a successful online crowdfunding campaign; the newspapers include the Globe and Mail in Canada, Le Monde in France, the Liberty Times in Taiwan, Nihon Keizai Shinbun in Japan, and Berlingske in Denmark.

Thread 1/10:【The Battle for #HongKong – Hongkongers’ Urgent Appeal to the World】

The LIHKG user stated that he hoped the Hong Kong event would replicate the success of the Baltic Way, so there will be more international support for the protesters.

“What is more important is that [the event] will be under the spotlight of international media, to show the world that determination of unity of Hongkongers in pursuit for freedom and democracy,” the user added.