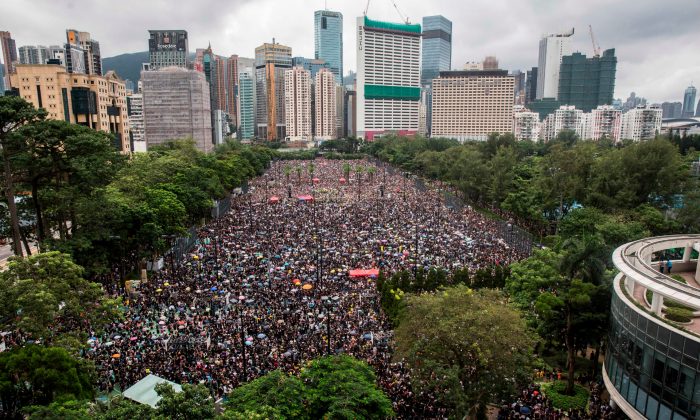 Protesters gather for a rally in Victoria Park in the latest opposition to a planned extradition law, in Hong Kong on Aug. 18, 2019. (Isaac Lawrence/AFP/Getty Images)
HK Current Affairs

A sea of umbrellas swarmed Hong Kong streets on Aug. 18 as Hongkongers organized mass protests for the 11th consecutive week.

What began as opposition to an extradition bill that would allow the Chinese regime to transfer individuals to face trial in mainland China has since expanded to include broader demands for police accountability and open democratic elections.

Despite the pouring rain, scores of Hongkongers filled Victoria Park for a rally condemning police violence during previous demonstrations. The overwhelming turnout brought traffic in the dense city center to a standstill.

Though police did not approve an application for a march following the rally, locals defied the ban and spilled onto the streets nonetheless.

It marked one of the largest mass protests in Hong Kong history, with over 1.7 million participants, according to the event organizer, the Civil Human Rights Front (CHRF). The group added that its crowd estimate did not account for others who were unable to enter Victoria Park due to the large crowds, and began marching toward Wan Chai, Admiralty, and other locations.

The march also was a rare reprieve from past weekends, which saw protests ending in violent clashes between police and protesters. Police presence was minimal throughout Sunday’s event.

“The reality has proved that it was Hongkongers and not the police who maintained order,” CHRF said in a statement on Sunday evening. “No police, we have peace!”

Accusations of police brutality have been growing lately, after a female volunteer medic was shot in the right eye, reportedly by rubber bullets, during clashes between police and protesters on Aug. 11. The UN Human Rights High Commissioner and Amnesty International have both denounced the tactics Hong Kong police used while dispersing protesters, including firing tear gas inside an enclosed subway station and shooting crowd control equipment at close range.

At around 3 p.m. on Sunday, protesters began leaving the park. As the march was not authorized by police and had no designated route, people began marching in different directions.

“Go Hongkongers,” “Reclaim Hong Kong, Revolution of Our Times,” the crowd chanted while holding signs illustrating their demands, such as calling for the suspended bill to be fully withdrawn, an independent inquiry into police use of force, and exonerating all arrested protesters.

Since June, police have made over 740 arrests and fired more than 1,000 cans of tear gas.

Many parents brought their children to the march, saying that they wished for the future generation to know what’s happening in the city.

“I don’t want to be immediately arrested for saying a [wrong] word when I grow up. … I have fears, but I have to come out to the protests because I’m also a part of Hong Kong,” a 12-year-old surnamed Lam told the Hong Kong bureau of The Epoch Times. Many Hongkongers have expressed fears that the extradition bill would allow the Chinese regime to punish its critics with impunity.

Sixty-year-old Helena Wong, a member of the city’s unicameral legislature, the Legislative Council, said at the rally that the Hong Kong government must respond to the protesters’ demands.

“Like all Hongkongers, we are sacrificing our time—and all that we have—in the battle for a democratic, free, and open Hong Kong,” she said.

Isaac Cheng Ka Long, vice chairman of the pro-democracy party Demosisto, said that it is organizing a mass student strike to further advance the movement.

“Under this abnormal society and abnormal government, there’s no way for us to go back to school normally,” he said, noting that about 20,000 students have shown support for the strike.

Many medical professionals also attended. They said that they wished to relay their empathy for the injured female medic, while expressing dissent to the government and police for “turning a blind eye” to protesters’ demands.

“We want to tell Hong Kong citizens: we really care about this society, we care about every citizen, and we are willing to walk you through this darkest time.”

Avery Ng, leader of a local party League of Social Democrats, called on more people to attend protests and pressure the government to respond.

“This is not just for the issue of our own freedom, it’s also for human dignity,” Ng said.

By evening, some protesters had yet to leave Victoria Park to begin the march.

Thousands also gathered near the government headquarters in Admiralty and pointed lasers at the building, apparently mocking the arrest of a university student for purchasing laser pens, which the police called an “offensive weapon.” The student has since been released.

At around 10:30 p.m., the police released a statement warning protesters to clear the area. The crowd gradually thinned out by midnight, as many shouted, “Let’s go home together” to avoid clashes with the police.

The Hong Kong government also released a statement in response to the protests, stating that though the participants’ march was peaceful, it was “seriously affecting traffic and causing much inconvenience to the community.”

Voices From the World

Canada and the European Union also issued a joint statement urging the Hong Kong administration to exercise restraint and engage in an inclusive dialogue with citizens. They called the violence while Hongkongers were exercising their basic rights “unacceptable.”

CHRF announced plans for another mass protest, to take place on Aug. 31.

The police should not issue an objection for the event if they can “understand that they will have a difficult time preventing citizens from joining the protest,” CHRF stated on its Facebook page.