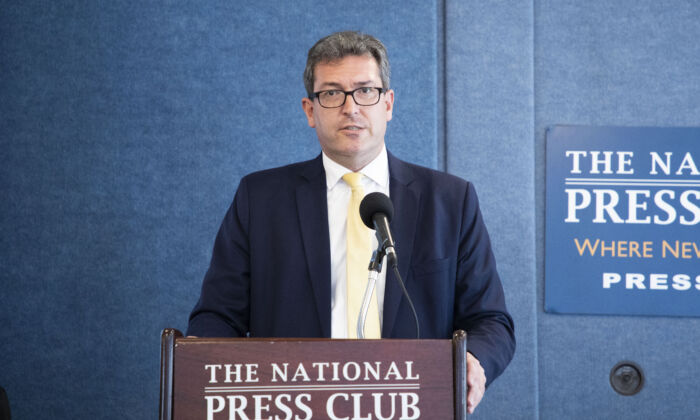 In a recent letter sent to Benedict Rogers, the co-founder and chief executive of the British NGO, Hong Kong police accused the group of “seriously interfering” in local affairs and “jeopardizing [the] national security” of China. HKW disclosed the formal warning in a March 14 statement.

“This makes Hong Kong Watch one of the first foreign organizations to be targeted under the draconian law,” the statement reads, referencing the contentious national security law that Beijing imposed on Hong Kong in mid-2020.

The new law grants Beijing sweeping powers to punish what authorities broadly define as subversion, secession, collusion with foreign forces, and terrorism with up to life in jail. It also empowers the police to request that internet service providers delete information on national security cases.

Law enforcement warned in the letter and a subsequent email that HKW could be fined HK$100,000 ($12,800) or its chief executive could face a three-year jail term. They asked the NGO to take down its website within 72 hours and cease any activities in contravention of the law.

“Should you fail to do so, further action will be instituted against you and ‘Hong Kong Watch’ without further notice,” the police stated.

Rogers said the letter exemplified the danger of Hong Kong’s national security law, but vowed to continue to be a voice for the people of Hong Kong.

Police confirmed that authorities had blocked HKW’s website in the Chinese-ruled city, as previously reported in early February, stoking concerns of internet censorship.

The latest message from Hong Kong authorities drew a stern response from politicians.

Chris Patten, Hong Kong’s last British governor, told HKW, “This is another disgraceful example of Mr. Putin’s friends in Beijing and their quislings in Hong Kong trying not only to stamp out freedom of expression and information in Hong Kong but also to internationalize their campaign against evidence, freedom, and honesty.”

The UK’s Lord Alton of Liverpool called the move “a direct assault on freedom of expression worldwide” and “a shocking attempt” to intimidate and threaten a foreign advocacy group for Hong Kong.

“I hope the British government and other governments in the free world will take this threat very seriously, respond swiftly and robustly to condemn it,” he said.

A number of U.S., British, and Canadian lawmakers also condemned the act, many of whom are patrons of the group, including Sam Brownback, former U.S. ambassador-at-large for international religious freedom; Alistair Carmichael, the UK chairman of the All-Party Parliamentary Group on Hong Kong; Sir Iain Duncan Smith, former leader of the UK’s ruling Conservative Party and co-chair of the Inter-Parliamentary Alliance on China; and Canadian Sen. Leo Housakos.

“Even as the world watches the appalling attack on Ukraine,” said Duncan Smith, “this attempt by China to arrest British citizens outside of China should remind us all that totalitarian China is a threat to freedom everywhere.”

Hong Kong has long enjoyed freedoms not seen on the Chinese mainland, and Beijing committed to protecting those rights and the city’s democratic system for at least 50 years after the territory was handed back to China from British colonial rule in 1997.

Since the national security law came into force, more than 50 civil society organizations have been forced to close in Hong Kong over the past 20 months, according to HKW.

While Hong Kong has its own Legislative Council, Beijing mandated changes to the makeup of the council to ensure an overwhelming pro-Beijing majority and required that only those it determines to be “patriots” can hold office.

Hong Kong’s last remaining pro-democracy newspaper, Apple Daily, was forced out of business in mid-2021. Library books and school curriculums have also been investigated for alleged secessionist messages. The legislature later passed a new film censorship law in October to “safeguard national security.” By the end of last year, a Hong Kong university removed a monument that commemorated the 1989 Tiananmen Square massacre.

All the city’s major pro-democracy figures have either been jailed, sought asylum abroad, or been intimidated into silence.