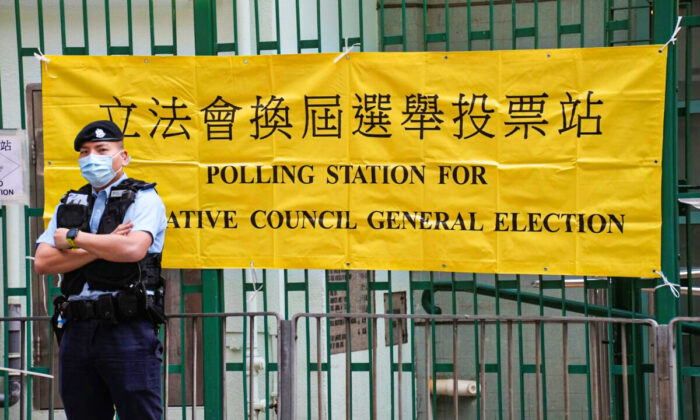 The United States, the UK, Australia, Canada, and New Zealand have issued a joint statement expressing “grave concerns” over the Legislative Council elections in Hong Kong, in which only pro-Beijing loyalists were approved to run.

Foreign ministers of the five countries, which make up the “Five Eyes” alliance, said they were concerned over “the erosion of democratic elements” of Hong Kong’s electoral system.

The UK stands with 🇦🇺, 🇨🇦, 🇳🇿 and 🇺🇸 in support of liberty and calls for China to act in accordance with its international obligations 👇 https://t.co/fPh2Gbxm3L

The elections were originally set to take place in September 2020, but were postponed by the local government, citing public health risks due to the COVID-19 pandemic. But pro-democracy critics claimed that it was an excuse to delay the vote.

As the Chinese Communist Party (CCP) regime vetted the candidates so that only “patriots” could run, pro-democracy candidates are now largely absent. The Dec. 19 election saw Hong Kong’s largest opposition party, the Democratic Party, fielding no candidates for the first time since the 1997 handover from the United Kingdom to China.

“Since handover, candidates with diverse political views have contested elections in Hong Kong. Yesterday’s election has reversed this trend,” the foreign ministers wrote.

After the electoral overhaul, the number of directly elected representatives was reduced to 20 from 35, and the proportion of seats for which the voters may elect officials was slashed to 22 percent, down from 50 percent.

The “Five Eyes” foreign ministers noted that “these changes eliminated any meaningful political opposition,” adding that many of the city’s opposition politicians remain in prison pending trial, with others in exile overseas.

The election witnessed a record low turnout. Only 30 percent of registered voters or about 1,350,680 people cast their ballots—almost half that of the previous legislative poll in 2016.

The five nations also said they “remain gravely concerned at the wider chilling effect of the National Security Law and the growing restrictions on freedom of speech and freedom of assembly, which are being felt across civil society.”

They urged the Chinese regime to “act in accordance with its international obligations to respect protected rights and fundamental freedoms in Hong Kong, including those guaranteed under the Sino–British Joint Declaration.”

Rita Li and PA contributed to this report.