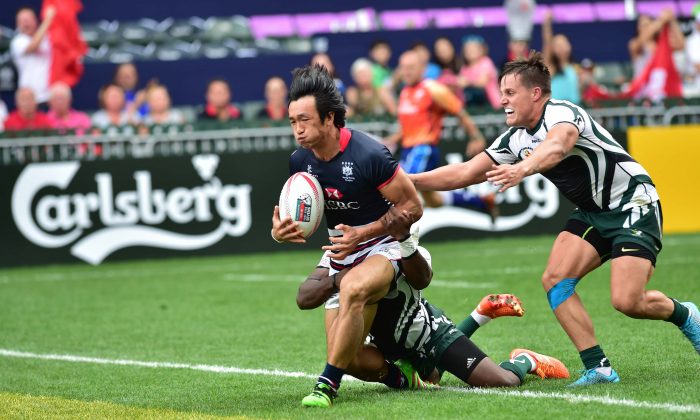 Hong Kong’s Salom Yiu Kam-shing scores against Zimbabwe in the 2016 Cathay Pacific/HSBC Sevens. In their Pool matches this year (2017) Hong Kong will compete with Chile, Sri Lanka and Namibia. Assuming Ihey get through the Pool phase, they are likely to meet tough opposition from Papua New Guinea, Germany or Spain. (Bill Cox/Epoch Times)
HK Rugby Union

HONG KONG—On Friday afternoon last week (March 31), Hong Kong announced their Men’s and Women’s squads to compete in this year’s Hong Kong Sevens. For Paul John, the new coach of Hong Kong replacing Gareth Baber, (Gareth returns to Hong Kong as coach of Fiji), the Men’s Qualifier is his first major tournament in charge of the Hong Kong team; he could not have asked for a tougher test. In the Women’s Sevens Qualifier Anna Richards, head coach of the Hong Kong Women, also faces a difficult and challenging tournament to establish themselves as a competitive force in Women’s Sevens.

This is the first season post Rio, where Rugby Sevens made such a positive global impression. Olympic success has provided an impetus to reappraise the importance of Sevens; the need to grow the game, especially for Women; and look at the sport (as so many sports do) through a natural four-year cycle that culminates with the Olympics. For Rugby Sevens, the next stop is Tokyo in 2020.

The Hong Kong team, led by Max Woodward, is an experienced, battle-hardened squad. Only Jason Jeyam is new to the squad. The rest of the team, including the like of Salom Yui Kam-shing, Rowan Varty and Jamie Hood, bring a wealth of experience to the squad, and Paul John is hoping they can make that experience count, in front of a home crowd, and go one better than last season. In 2016, when Hong Kong lost 24-14 in the final to their perennial nemesis Japan.

This year there is no Japan to fear in the Qualifier, but they face a tough pool group against Chile, who has already played on the main Sevens circuit this season, Sri Lanka and Namibia. Once the knock-out matches start, assuming they qualify, Hong Kong face the likes of Germany, Spain and Papua New Guinea: this is a highly competitive tournament and it’s hoped the prep work in Borneo, Fiji and the Gold Coast for the Hong Kong team, will give them an edge to go one better than 2016.

Hong Kong Women qualified for the fifteen aside Women’s Rugby World Cup, but have yet to enjoy the same level of success in Sevens. Extensive pre-tournament training in New Zealand and Japan has given Hong Kong its best preparation, but can that translate to on-field results? The Women’s Qualifier is equally competitive as the Men’s, with twelve teams flying in from around the globe to compete for one coveted place on the Women’s circuit next season.

On Friday, the Women’s semi-finals, and later the final will be played at the Government Stadium.

For Hong Kong to reach the final four, they first must qualify from their pool, which includes three powerful teams, Argentina, Kenya and Belgium. Captain Christy Cheng Ka-chi and Vice-captain Natasha Olson-Thorn will need to guide the Hong Kong team to surpass themselves if they are to have a chance to feel the uplifting cheer of local support on Friday afternoon.

Elsewhere, away from the rigors of team preparation, match focus, qualification and points, Hong Kong (the City) becomes a Rugby Fest for a few days. The Tens tournament at the Hong Kong Football Club is an opportunity for current and former players to provide an entertaining social event prior to the weekend showcase; there are evening events at Chater Garden, the ‘down town’ rugby village; there are player lunches, charity events, schools events etc. and for a few days Hong Kong embraces the spirit of the game that began as a deliberate action of breaking the rules of football. This year marks the 450th anniversary of Rugby School, where William Webb-Ellis broke that rule and picked-up the ball. Part of the year-round celebration will be at the Hong Kong Sevens this year.

The Sevens action begins with the Women on April 6-7 and their tournament, segues into the Men’s event, that starts Friday and culminating on Sunday April 7-9, with a Women’s Qualifier, a Men’s Qualifier and points winners for the Cup, Plate, Bowl and Shield. Will South Africa’s rich vein of form continue? Will England narrow the points gap? Will Fiji bring their Olympic form to Hong Kong? Will the USA or Scotland provide a surprise? Will New Zealand shine? All will be answered by Sunday evening.