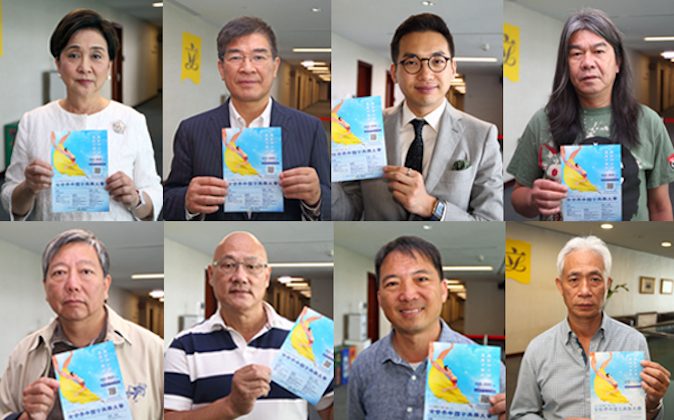 Pro-democracy Hong Kong legislators show their support for New Tang Dynasty's International Chinese Classical Dance Competition. The venue for the Asian Pacific preliminary stage in Hong Kong was recently ceded to the Hong Kong government on the date of the competition, a move that local legislators believe to be political interference. (Epoch Times)
China

Hong Kong lawmakers have criticized Hong Kong’s leader and his government for forcing a semi-official organization to cancel a contract with a New York-based Chinese language broadcaster, raising the specter of political interference over the creative arts in the already restive city.

On April 22, New Tang Dynasty Television (NTD) signed a legal-binding agreement and made a full payment to Heung Yee Kuk Building Management for the use of Heung Yee Kuk Tower Theater on July 30. The theater, which is located in the district of Sha Tin in Hong Kong, was to be the venue for the Asia Pacific region preliminary round of the seventh NTD International Chinese Classical Dance Competition.

However, Heung Yee Kuk, a powerful organization that represents residents in Hong Kong’s New Territories region, had to cancel NTD’s booking on June 1 because the government demanded use of the theater on the same day as the dance competition for “election purposes.”

The revocation of the contract, Hong Kong legislators from the pro-democracy camp say, restricts Hong Kong’s freedom of artistic expression and sullies the Chinese city’s reputation as an international financial hub. These legislators condemn the Hong Kong government’s move and promise to raise the issue in a legislature sitting.

While there are elections for Hong Kong’s legislature in September, the Hong Kong government typically secures venues much closer to the polling dates, and uses schools as polling stations.

The Hong Kong government’s irregular move has led the city’s pro-democracy community and overseas Chinese commentators to believe that the theater cancellation was an act of deliberate political interference by Chief Executive Leung Chun-ying.

The preliminary round of the dance competition for Asia Pacific contestants were mostly held in Taiwan, and once in Hong Kong. The semi-finals and finals are held in New York.

The recent theater cancellation, however, jeopardizes the upcoming 2016 preliminaries.

In a letter addressed to Leung Chun-ying’s office, Hong Kong’s Leisure and Cultural Services Department, and the Heung Yee Kuk, NTD said it is appreciative of the Heung Yee Kuk for renting its theater for the dance competition, and sees rural organization as a victim of the incident. NTD also blames “a small number of people from the Hong Kong government” for causing the contract cancellation.

Many pro-democracy Hong Kong lawmakers saw the cancellation of the NTD Dance Competition venue as an attempt to stifle artistic freedom, and suspect that Hong Kong’s leader is trying to please his political masters in Beijing.

Lee Cheuk-yan, the general secretary of the Hong Kong Confederation of Trade Unions and veteran legislator, told Epoch Times that Hong Kong and Hongkongers “stand to lose out” if the Hong Kong government doesn’t approve performance venues for artistic organizations.

“More and more of these incidents have happened since Leung Chun-ying took office,” Lee said. “Falun Gong or its related entities have had their seminars, forums, and performances constantly obstructed.”

NTD regularly reports on human rights abuses in China, and broadcasts into the mainland. It is strongly opposed by the Chinese Communist Party.

Lee added the contract cancellation is “very obvious political suppression,” and encourages people to speak out against it “If the government can suppress one group, they can also suppress other groups—it’s code red for everyone’s freedoms in Hong Kong,” he said.

Yeung condemned the Hong Kong government’s “near-sighted” and “timid” blocking of NTD a “disgrace to Hong Kong’s status as an international financial hub,” and recommended that NTD file a civil case.

Other prominent Hong Kong legislators like Emily Lau, Leung Kwok-hung (no relation to Leung Chun-ying), and Albert Chan too condemned Leung Chun-ying and his government for the incident, and said that they would raise the matter in the legislative council.

NTD intends to hold its competition in Hong Kong, and is currently looking for an alternative venue, according to Xin Ling, a coordinator overseeing the dance competition.

Rep. Chris Smith (R-N.J.), a co-chairman of the United States Congressional-Executive Commission on China, met with NTD representatives to discuss the theater cancellation, and promised to bring up the matter with the U.S. Executive Branch, and keep track of future developments.

Li Zhen, Lin Yi, and Luo Ya contributed to this report.