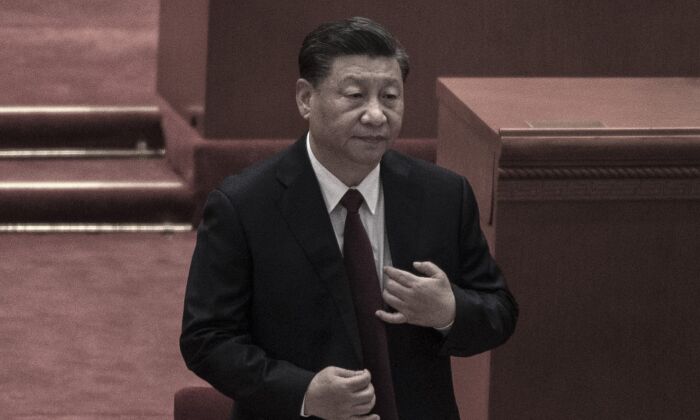 Chinese leader Xi Jinping buttons his jacket at a ceremony to honor contributions to the Beijing 2022 Winter Olympics and Paralympics in Beijing, China on April 8, 2022. (Kevin Frayer/Getty Images)
Hong Kong

Hong Kong police announced on June 28 that preparations are underway for Chinese leader Xi Jinping’s “possible” visit next month to mark the 25th anniversary of the city’s handover from Britain to China.

Hong Kong Assistant Police Commissioner Lui Kam-ho told reporters at a press conference that Xi will attend a series of official events in person, including the inauguration of Hong Kong’s next leader, John Lee, on July 1.

However, Beijing has not confirmed Xi’s trip to Hong Kong.

It’s been five years since Xi last visited the city, and it would be his first trip out of mainland China since the COVID-19 pandemic took hold about two and a half years ago. Xi’s last overseas trip was made in January 2020 when he visited Burma (commonly known as Myanmar).

The statement described Xi’s visit as “possible.” However, The Associated Press quoted Lui on June 28, saying that Xi will visit the city in person.

Chinese state-run media Xinhua said in its one sentence report on June 25: “Xi Jinping will attend the celebration of the 25th anniversary of Hong Kong’s return to the motherland and the inauguration ceremony of the sixth government of the Hong Kong Special Administrative Region.”

Lau Suk-yee, a member of Hong Kong Executive Council and Legislative Council, said that Xi will visit the city but he will have no contact with any officials who recently tested positive for COVID.

Hong Kong announced on June 23 that Secretary for Constitutional and Mainland Affairs Erick Tsang and Director of the Chief Executive’s Office Eric Chan, who will become the next Chief Secretary for Administration, had both tested positive for COVID.

Ronny Tong Ka-wah, a non-official member of the Executive Council of Hong Kong, told HK01 on June 25 that it’s hard to say whether Xi would attend the ceremony in person.

The same report quoted Tam Yiu-chung, a member of the Standing Committee of China’s rubber stamp legislature, as saying that Xi might not visit Hong Kong.

Some Chinese media reported that Xi doesn’t want to visit Hong Kong due to alleged assassination plots by his political rivals. There is an ongoing struggle among political factions within the Chinese Communist Party (CCP)—mostly between Xi and former leader Jiang Zemin.

July 1 will mark a milestone of Hong Kong’s development.

When the Chinese Communist Party (CCP) took over the city in 1997, it promised Hongkongers and the British government that it would respect the city’s political and economic freedoms for the next 50 years under the “one country, two systems” framework.

However, in the past two and a half decades, the CCP has eroded Hong Kong’s freedoms.

On June 30, 2020, the CCP passed the National Security Law, which gives Hong Kong authorities (Beijing loyalists) the right to detain and sentence pro-democracy activists. In addition, some Hong Kong media companies that refused to comply with the CCP were forced to close under the security law, including Apple Daily, Stand News, and Citizen News.

Without the protection of the political system, Hong Kong’s business environment has deteriorated. According to official data, in 2020, the city lost 93.6 percent of overseas tourists, its GDP decreased by 6.5 percent, and retailers’ revenue decreased by 24.3 percent. In 2021, 30,000 residents left Hong Kong, the majority of whom immigrated to other countries.