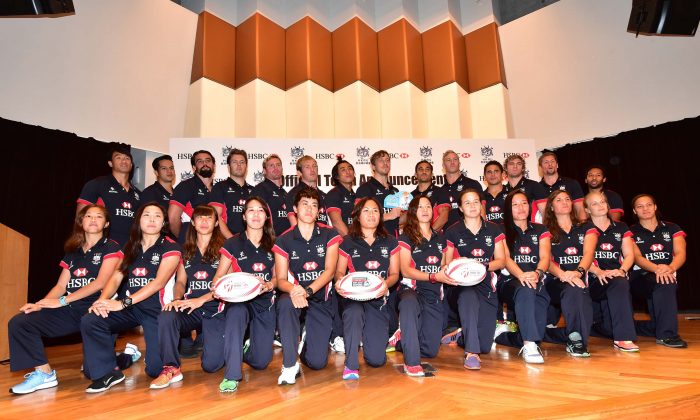 HONG KONG—Hong Kong announced on Friday March 31, its squads for the upcoming World Rugby Sevens Series Men’s and Women’s 2017 Qualifiers to be held as part of the Cathay Pacific/HSBC Hong Kong Sevens schedule from April 6-9.

The announcement took place at Olympic House, Causeway Bay by Robbie McRobbie Deputy CEO of the HKRU, the women’s and men’s squads for the Ruby Sevens Qualifiers together with their respective team coaches. The selection includes 14 players for each which will be reduced to 12 for the final match squad. An additional nominee as injury replacement, is also allowed.

Both competitions are in three pools of four, with the top two teams and the two best third place sides progressing to the quarterfinals.

Men’s coach Paul John said “These countries [in the Qualifier] are getting stronger and stronger. Chile have had a very good two weeks on the Series and will be playing their third tournament on the trot here, so it is a real challenge. But it is a good challenge for us. It’s always exciting to have the opportunity to play against quality opposition,”

Outside of the Pool matches the competition gets even stiffer Papua New Guinea has experience on this year’s Series, while Germany (who beat Hong Kong on day one last year) are returning even stronger.  Spain, who top Pool G, qualified for the Olympics last June and finished ranked higher than Germany in Europe in this year’s qualifier event.

This will be by far the toughest and most competitive tournament over the weekend. All of the men’s qualifier tournament matches will take place at the HK Stadium starting at 9am on Friday April 7, continuing as the early matches on Saturday morning and with the quarter finals taking place during Saturday evening. Semi-finals and the final are scheduled for Sunday.

In the women’s event, in Pool A, Japan and China face the Netherlands and Jamaica; Hong Kong, in Pool B face Argentina, Kenya and Belgium: and in Pool C South Africa face Colombia, Papua New Guinea and Italy.

The women’s Pool and quarter final matches (Thursday and Friday morning April 6-7) will be held at the So Kon Po Rugby ground adjacent to the HK Stadium and the quarter finals on Friday. The semi-finals and final will be in the main HK Stadium on Friday April 7 afternoon and evening.

Anna Richards and her squad have been clocking in the overtime as their preparations have progressed, first heading down south in February to train with the New Zealand Development squad, before fine-tuning with a training camp in Japan and an incoming tour from the Shandong Province, effectively the China Sevens team, earlier this month.

They proved hard run-outs, against serious opposition, and Richards believes that augurs well for the week ahead.

“We were able to replicate tournament conditions against some good, quality opposition, which is incredibly important before a tournament like the Qualifier. We’re fortunate to be full-time out at the Hong Kong Sports Institute as well so it’s all been coming together nicely.”

This is the best quality Women’s event to be staged in Hong Kong. It will be benchmark competition for the Hong Kong women, who have qualified for the Women’s Rugby World Cup in Ireland, but have yet to deliver on early promises in Sevens. Having attended training camps in New Zealand and Japan, it’s hoped this will translate on the pitch into a team that challenge the very best in women’s sevens rugby.