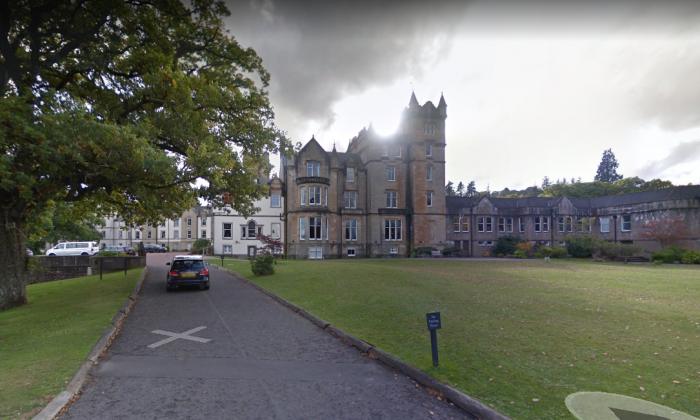 The grounds of Cameron House hotel, on the banks of Loch Lomond.(Screenshot via Google Maps)
UK

This is the moment a baby boy was rescued from a fire that ripped through a five-star hotel, as his parents—who were on honeymoon—wait anxiously below.

Dramatic footage has since emerged, showing a firefighter rescuing baby Jimmy Logan from the third floor of the burning building. He carried the baby carefully under his arm as he climbed down a steep ladder while Jimmy’s newly-married parents looked on.

His parents, Andrew and Louise Logan, were on their honeymoon, and were celebrating their wedding on Friday, according to the Daily Mail.

All three were rushed to Queen Elizabeth University Hospital in Glasgow with smoke inhalation, but were later discharged, the Metro reported.

The Scottish Sun revealed how the newly-married parents cried for help as their £600-a-night ($800) suite room filled up with smoke.

“The family were screaming ‘Help us, we can’t get out and we’ve got a baby’,” witness Linsey Allan told the newspaper.

“Then the room filled with smoke, the lights in the room went off and we didn’t hear them again. I was in tears and shaking. It was incredibly traumatic, horrendous.”

The emergency services then came to rescue the family from the deadly blaze.

How sad to see these images of Cameron House, hope it can continue to operate: Luxury hotel fire on banks of Loch Lomond https://t.co/9dyPOCKpL0 pic.twitter.com/dWPROoX5qY

Over 200 guests were evacuated from the luxury hotel at around 6:50 a.m. on Monday morning, police said.

Police confirmed that one person was pronounced dead at the scene and another died after being taken to Royal Alexandra Hospital in Paisley.

Guest Agnes Tataki told the the Daily Mail, “A man was stuck up, right at the top, and he smashed the window and got out himself and then firefighters had to take him down.”

A woman who works in the kitchen of the luxury hotel told the BBC that she couldn’t believe the news.

About 70 firefighters were called to the scene at the height of the blaze, according to reports.

The cause of the fire is still being investigated. Police said a report will be sent to the procurator fiscal.

The hotel confirmed that the fire was within the main building.

A statement on their website reads: “Due to an ongoing incident please be aware that Cameron House will remain closed to arriving guests for at least the next 72 hours.”