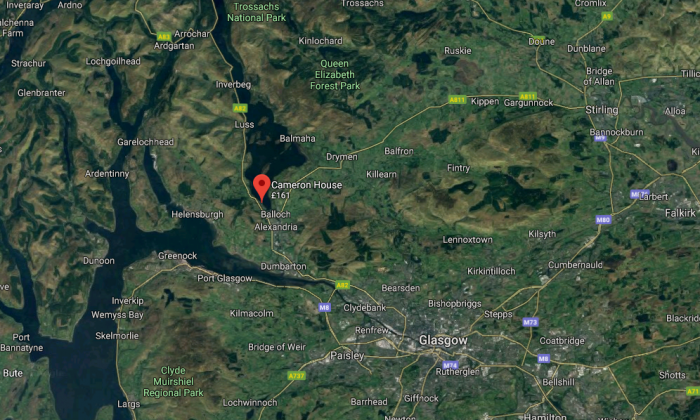 The blaze ripped through a a five-star hotel on the banks of Loch Lomond on Monday morning. (Screenshot via Google Maps)
UK

Two people have died in a fire that broke out at a five-star hotel on the banks of Loch Lomond.

Over 200 guests were evacuated from the luxury Cameron House at 6:50 a.m. on Monday morning, Police Scotland said.

Police said that one person was pronounced dead on the scene and another died after being taken to Royal Alexandra Hospital in Paisley.

Three other people, thought to be from the same family, were taken to Queen Elizabeth University Hospital in Glasgow.

“As soon as we left our room – I just thought it was a fire alarm, just like a practise go,” one guest told BBC Radio Scotland.

“But when we left – five stairs down from our room – we saw a whole room full of smoke and flames.

“So we had to run back down the hall, chapped on everyone’s doors and shouted ‘fire!’.”

According to the Daily Mail, guest Richard Smith wrote on Facebook: “Quite a memorable first wedding anniversary. The hotel we’re staying at is on fire.”

About 45 firefighters were called to the scene, according to the Telegraph. Officers told the newspaper that the hotel has been “extensively damaged.”

Two people have died and three others have been taken to hospital after a fire at the Cameron House Hotel beside Loch Lomond. pic.twitter.com/9yuo9lJSeD

On its Facebook Page, the hotel confirmed that the fire was within the main building.

A statement on their website reads: “Due to an ongoing incident please be aware that Cameron House will remain closed to arriving guests for at least the next 72 hours.

“We would ask all guests and customers to remain patient as we work with the emergency services to establish the extent of the damage and ascertain when we will be able to re-open. More information will follow in due course.”

The nearby Duck Bay Hotel owner has offered to provide tea, coffee and refreshments to emergency services tackling the blaze, the Daily Mail reported.

This is absolutely dreadful news. My heart goes out to the loved ones of those who have died, and to all those affected. My thanks also to our brave firefighters and emergency services. https://t.co/JnIbVs6vHr

As one of Scotland’s most luxurious hotels, the resort is a popular wedding venue and features two golf courses, a Michelin-starred restaurant and a spa. It has 132 rooms and is surrounded by 100 acres of woodland.