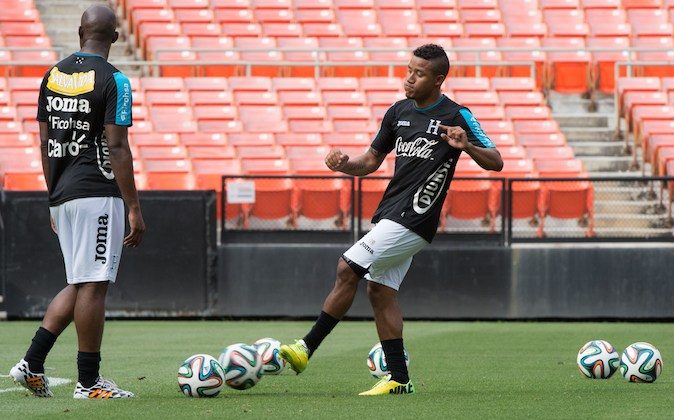 Honduras national team midfielder Luis Garrido kicks the ball during a training session in Washington on May 28, 2014 on the eve of a World Cup preparation match against Turkey. (NICHOLAS KAMM/AFP/Getty Images)
Soccer

The Honduras vs Turkey soccer international friendly match is set for Thursday, May 29.

The game will be broadcast on Show TV in Turkey.

The game will also air on Univision Deportes, beIN Sports USA, and beIN Sports en Español in the United States.

Honduras’s game in Washington is the first of a three friendlies scheduled ahead of their Group E opener against France on June 15.

After lining up against Turkey, Honduras will face Israel on Monday, before their tournament preparations conclude against England on June 7.

Coach Luis Suarez is clear on his team’s objective.

“We are putting an order in Honduras and that is to get to the next round, the second round,” he told Republica Deportiva.

“We know it is a reality that is not easy to realise, but we have players with great professionalism.”

Meanwhile, Turkey will be using this friendly match to prepare for Euro 2016.

Coach Fatih Terim has used a number of young, inexperienced players in recent games as the Turkey is working towards the future in order to avoid further qualification failure.

After Honduras, Terim and his men will also take on the United States on June 1.