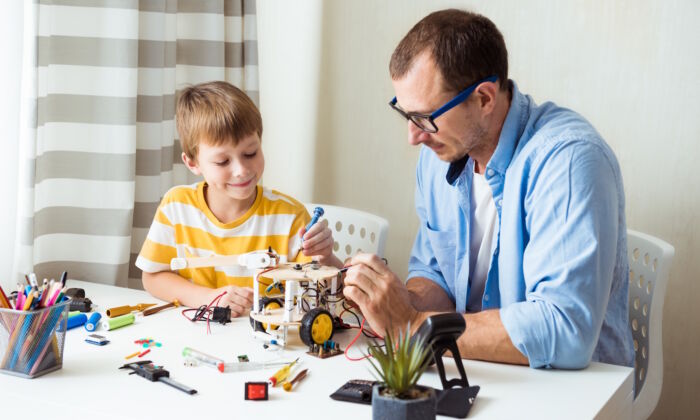 Despite schools reopening and COVID-19 restrictions being lifted, a lot of American families are choosing to keep homeschooling their children. (Iren_Geo/Shutterstock)
US

Since the onset of COVID-19, parents have taken the reins of their children’s education and made homeschooling mainstream.

Before the pandemic, homeschool rates from the U.S. Census Bureau have been holding steady at around 3 percent since 2012.

However, data from 18 states reveals the number of home-educated students skyrocketed 63 percent in the 2020-2021 academic cycle and fell by only 17 percent during the 2021-2022 school year.

The total number of children receiving home education soared to 3.7 million in that time frame.

A drop in public school enrollment rates this year reflects the trend.

In 2020-2021, the number of students enrolled in public school fell by 3 percent, according to the National Center for Education Statistics. Yet the rates haven’t rebounded as expected this year, despite a return to physical classes and more flexible COVID-19 protocols in some districts.

In some districts, the reduction in students attending public school was marked.

This is evident in Grandview, Missouri, where the number of students enrolled in public school has dropped 7.5 percent over the past two years.

According to homeschool educators, this isn’t likely to change anytime soon.

“With a lot of things that are happening in public schools, a lot of it is curriculum and also the teaching that is happening. Parents are starting to realize it’s not very family friendly,” Stephen Howsley told The Epoch Times.

Howsley is the assistant manager for public policy at the Texas Home School Coalition (THSC), which has operated both as a resource and advocate for homeschool parents since 1986.

Texas has a long tradition of homeschooling, with more than 400,000 families and an estimated 750,000 students currently being taught outside traditional public learning institutes.

When asked why he thinks the popularity of educating children at home has outstripped the restrictions of COVID-19, Howsley said, “I think it’s honestly a culmination of so many things. One of the first ones that comes to mind for me is, from what I’ve heard, parents just like it.”

He joked that after the stay-at-home orders arrived in March 2020, everybody in Texas became a homeschooler overnight.

Additionally, Howsley maintains that part of the growing popularity of homeschooling bloomed from the forced abandonment of brick-and-mortar classrooms during the height of the pandemic.

“Some of those families started public school at home options when they started to roll out. But the vast majority of them were homeschooling from the very beginning,” he asserted.

“That’s the one thing in the midst of the craziness we look back on fondly because it was something where despite how tough COVID was, we were excited so many families were suddenly exposed to something we think is just excellent.”

David Garretson at the Arizona Families for Home Education (AFHE) says that the pandemic served as a catalyst, not a reason, for the rapid rise of homeschoolers in his state.

“This is why even though schools are reopening and COVID restrictions are being lifted, we see a lot of families choosing to homeschool,” Garretson told The Epoch Times.

He explained the AFHE spoke with parents who were either considering or already homeschooling their kids. They raised questions that challenged previously held assumptions regarding the quality of public education.

One of the common findings shared by homeschool parents includes gaps in their children’s knowledge that traditional schooling hadn’t addressed. Many parents also discovered a difference in values along with an overall better performance from their kids when schooled at home.

And with the rise of remote jobs over the past two years, parents found even greater freedom to take charge of their children’s education.

“We celebrate the fact that many families are discovering the benefits that come with the homeschool lifestyle,” Garretson said.

Control over the quality of education is a significant determining factor for homeschoolers. Students at home typically score 15 to 30 percentile points above their peers receiving public education on standardized achievement tests, according to the National Home Education Research Institute.

Florida homeschool teacher and evaluator Cherie Lee echoed this sentiment and shared her own experiences with at home education as a child.

“I was homeschooled from second to eighth grade. My Mom felt compelled to homeschool me since I was failing in reading and was so unhappy in school,” Lee told The Epoch Times.

“[Then] I taught in private and public school before I stayed home with my own children. I’m now a homeschool parent myself.”

Lee says homeschool parents also have the ability to choose their curriculum and be more involved with what their kids are learning. Additionally, it’s a more efficient method of education.

“It’s done in three to four hours, and there’s time for so much more! Time for traveling and learning outside the classroom, mentoring and entrepreneurship, job shadowing, all that fun stuff I don’t think schools are able to offer anymore,” she said.

“I think the reason some families are continuing to homeschool is they’ve found many benefits to this way of education,” King told The Epoch Times.

“Among other things, they’re enjoying the extended time they get to spend together, the flexibility of setting their own schedule, and the liberty of choosing their own curriculum.”

Lee added that there’s a difference in the values observed within the public school system that she says many parents won’t tolerate.

“Often times parents choose to homeschool because their morals and values do not align with the public schools … The transgender and Critical Race Theory are all things that many families do not agree with.”

Public schools across the United States have faced considerable backlash and protests over introducing Critical Race Theory and transgender initiatives into curriculums.

“When they’re teaching this in schools, I wonder what they’re not teaching,” Lee noted.

Moreover, the issue of safety in public schools is a serious issue for some parents.

The timing for security concerns has never been more poignant or relevant.

On May 24, an 18-year-old gunman walked into Robb Elementary School in Uvalde, Texas, with an assault rifle and killed 21 people.

Former president Donald Trump called the action a “heinous massacre” and a “savage and barbaric atrocity that shocks the conscience of every single American,” which he followed with a call for better security at schools across the nation.

Howsley says many parents have already voiced fears to the THSC regarding the safety of their children at public learning institutions.

“That’s probably another thing that caused people to reevaluate, ‘is it safest for me to be sending my child to a public school every day of the week when in reality, maybe I work from home and can homeschool at the same time?'” he postulated.

Lee asserted, “Physical safety has been a concern since the Columbine High School.”