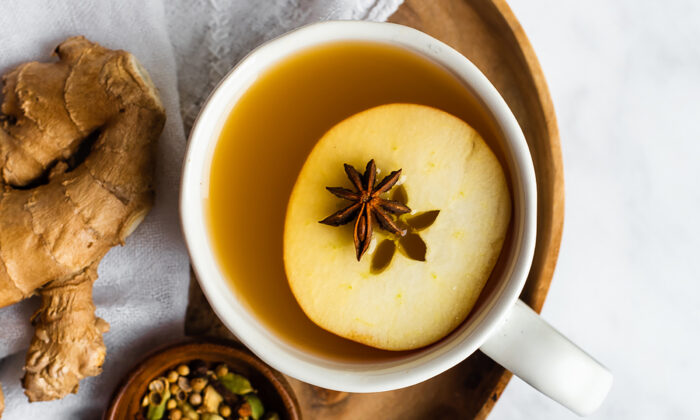 Brandy and hard cider give this homemade wassail a bit of kick, while soft apple cider or apple juice lends a little sweetness and tempers the alcohol. (Jennifer McGruther)
Drinks

Spread Cheer Into the New Year With Homemade Wassail

The traditional English drink, a hot, spiced, boozy brew, has a long history of generosity and merriment—and a good dose of mischief
By Jennifer McGruther

You’ve undoubtedly heard the “Wassail Song,” or “Here We Come A-wassailing,” which seems to be on replay throughout all of December. “Love and joy come to you, / And to you your wassail too,” begins the refrain. With verses that celebrate food, drink, generosity, and merriment, it’s a cheerful tune intended to bring blessings to the listener.

Wassail, as we know it today, is a boozy mulled hard cider, although many modern recipes skip the alcohol in favor of sweet apple cider. Rooted in pre-Christian traditions, wassail (the drink) and wassailing (the practice) are older than Christmas itself.

The oldest versions of the drink were likely made by warming mead, a honey wine, with spices. Occasionally, you might drop in a roasted crabapple, which would puff up when exposed to the heat of the wassail bowl. Later versions of the brew included hard cider or barley beer in place of the mead, but the warmth and spice remained a constant.

These steaming communal bowls of spiced alcohol would be shared with wintertime visitors along with the greeting, “Wæs hæil,” in a sort of medieval toast that meant, “Be in good health.” This greeting evolved to the modern word wassail and, over time, came to be associated less with a blessing of good health and more with the drink itself—and the merriment that ensues once you’ve drunk plenty of it.

As a nearly ancient drink that invokes blessings for health in the deepest, darkest nights of winter, wassail has somewhat mystical roots. As an agrarian society, the ancient peoples who lived in modern-day England owed their survival to the land and the bounty it offered. Certain crops, apples among them, proved essential to their survival. These fruits fed not only families, but also livestock, and were used to make cider, too.

As midwinter orchards stood cold and dormant, revelers gathered to bless the apple trees. It’s an ancient tradition still performed today in some parts of rural Britain. Torchbearers light the way while merrymakers sing songs and make a ruckus by banging pots and pans. Families warm themselves by bonfires, and growers pour a little wassail at the base of each tree. If they do their jobs right, they frighten away evil spirits and please the tree spirits with their blessing, ensuring a plentiful harvest the next autumn.

With time, the ancient practices of blessing the apple trees and making merry began to mix and enmesh themselves with another winter holiday: Christmas.

With big box stores putting up Christmas displays as soon as Halloween ends, the modern Christmas season seems to extend for months. In the traditional calendar, though, it begins on Christmas Eve and extends for 12 days thereafter, ending on the evening before Epiphany, also known as Twelfth Night.

During the Christmas season, when the holiday spirit loosened the societal strictures that kept the rich and poor, the privileged and disadvantaged apart, the young and poor engaged in the practice of mumming or wassailing. Singing wassailing songs, they went door-to-door to the homes of their wealthy neighbors, where they’d drink from the wassail bowl and toast to the health of the master and mistress of the house. In addition to wassail, revelers often also demanded food, trinkets, or money from their hosts, who, begrudgingly or not, were bound to comply.

Often, however, these 12 days became marked less by holiness and more by festivity and drunken merriment that could border on buffoonery. Drinking such a potently alcoholic brew, house after house, often resulted in outright debauchery. Early records describe wassailers as engaging in mischief on the Twelfth Night, shooting muskets into the air and damaging property. There was more than one attempt, both in England and in colonial America, to ban these Christmas traditions.

By the Victorian era, the booze-fueled rowdiness that characterized earlier Christmas celebrations began to fade, and holiday traditions began to focus on generosity of spirit and family. With time, the drunken and raucous practice of wassailing from door to door evolved to become the decidedly tamer and wholesome version we know today: Christmas caroling.

Gone are the musket shots, the banging of pots and pans, the demands of entry to your neighbors’ homes, but you can still warm up some wassail to sip on a cold winter night. You might even offer some to your neighbors—or the apple trees.

Brandy and hard cider give this homemade wassail a bit of kick, while a team of warm spices infuse the drink with notes of cinnamon, cloves, and allspice. Soft apple cider or apple juice lends a little sweetness and tempers the alcohol.

If you prefer to make an alcohol-free version, substitute soft apple cider or apple juice for both the brandy and the hard cider. You can also easily swap out the spices listed in this recipe for prepackaged mulling spices you can find at most grocery stores during the winter holidays.

Pour both the soft and hard ciders into a medium pot, and then stir in the brandy. Drop the spices into the pot. Warm the wassail over medium heat until steaming, and then turn down the heat to low. Cover the pot, and allow it to warm at least 20 minutes before serving.

While the wassail warms on the stove, slice the apple crosswise into discs about 1/8-inch thick. Set aside.

To serve, strain the wassail through a fine-mesh sieve into mugs or a serving bowl. Garnish with apple slices.

You can store prepared wassail in the fridge for up to 3 days. To serve, warm it on the stove over low heat until pleasantly hot.

This recipe originally appeared on NourishedKitchen.com and is reprinted with the permission of the author.

Jennifer McGruther
Follow
Jennifer McGruther, NTP, is a nutritional therapy practitioner, herbalist, and the author of three cookbooks, including “Vibrant Botanicals.” She’s also the creator of NourishedKitchen.com, a website that celebrates traditional foodways, herbal remedies, and fermentation. She teaches workshops on natural foods and herbalism, and currently lives in the Pacific Northwest.