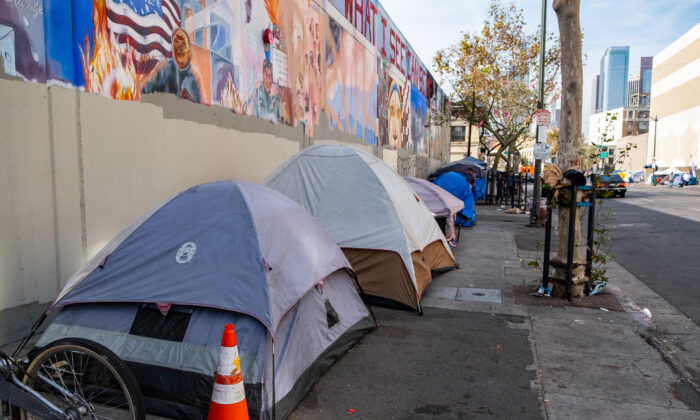 New Skid Row Housing Project ‘Could Be Triggering for Those in Recovery’: Homeless Advocate

When Los Angeles broke ground on the new Weingart Towers housing project in Skid Row on Sept. 28, many Los Angeles officials, including Mayor Eric Garcetti, touted the move as one of the most “comprehensive solutions to homelessness,” also crediting Proposition HHH, a 2016 ballot initiative that partially funded the project.

A total of $48 million of the Prop HHH funds will go to the construction of the Weingart Towers—Los Angeles’s largest expected homeless housing development—on Skid Row; $32 million to the first tower, which will provide 382 units to homeless people, and another $16 million to a second 104 unit-tower.

Over 75 percent of voters passed Prop HHH, a $1.2 billion ballot initiative that aims to combat homelessness by building 10,000 supportive housing units. Five years later, city officials are coming to the end of Prop HHH’s funds after building only about 10 percent of their initial goal.

Some critics question the efficacy of the new Skid Row project, Prop HHH, and the city’s overall approach to homelessness.

Los Angeles Controller Ron Galperin published a report in 2019 that found that only 892 supportive housing units and 368 affordable units had been built. In 2021, the number is estimated to be about 1,000 units. The majority of these units are one-bedroom or studio apartments ranging from 275 to 750 square feet, and cost the city between $350,000 and $690,000 per unit to build, according to Galperin’s report.

The report estimates that the overall cost of the projects increased 12 percent between 2016, when the project costs were first estimated, and 2019; the cost of several of those projects jumped 25 percent in those first three years.

Los Angeles Homeless Services Authority (LAHSA) estimated that there were 28,464 homeless people in the city of LA in 2016, with 21,338 of them unsheltered. In 2020, LAHSA reported 41,290 unhoused Angelenos—a nearly 50 percent increase in 4 years.

The jump in cost, along with the rapid growth the homeless population has seen in recent years, caused Galperin to report that the project is “not keeping pace with the growing demand for supportive housing and shelter.”

In addition, Galperin criticized the program’s management, saying that the developers were spending large amounts of money on “soft costs,” or “non-construction activities such as fees, consultants, and financing costs,” and spent millions paying interest payments by borrowing bonds before the projects were ready to use the money. Galperin recommended that the program create a centralized accounting authority for the rest of the program.

In addition, Galperin also recommended that the city “find other ways to use any remaining funds to deliver faster and less expensive projects, while also reviewing the most expensive projects in predevelopment to see what can be done to reduce costs.”

Skid Row Could Be Triggering

Homelessness and drug addiction recovery advocate Tom Wolf told The Epoch Times that the lack of financial oversight “speaks to the mess around permanent supportive housing.”

Wolf spent several years struggling with addiction to pills and heroin, going from being a family-oriented child support officer to being homeless in San Francisco’s Tenderloin district.

Tom was forced to get clean after an arrest and three months in jail in 2018. Wolf’s brother bailed him out, and he spent the next six months in a Salvation Army rehabilitation facility. Wolf has now been sober for three years and served as a case manager at a different Salvation Army in San Francisco, where he has helped others in recovery.

“It’s very traumatic to be homeless. Some of the basic challenges [about] housing someone, and also you have to think about where they’re housing,” Wolf said, adding that walking outside the building and seeing drug dealers on Skid Row may be problematic for someone in addiction recovery.

“Look, you’re breaking ground on that housing project in Skid Row, that [would be] a trigger for me as a person that’s trying to live in that place clean and sober, and then it gets a double down on when I walk outside, I’m back on Skid Row, because that’s where they built the housing project. So, these are the questions that I think that are worthy of asking as to why they chose that spot and not somewhere else,” Wolf said. “It just doesn’t make sense. The way I look at it is that it’s a humanitarian crisis and we need all hands on deck.”