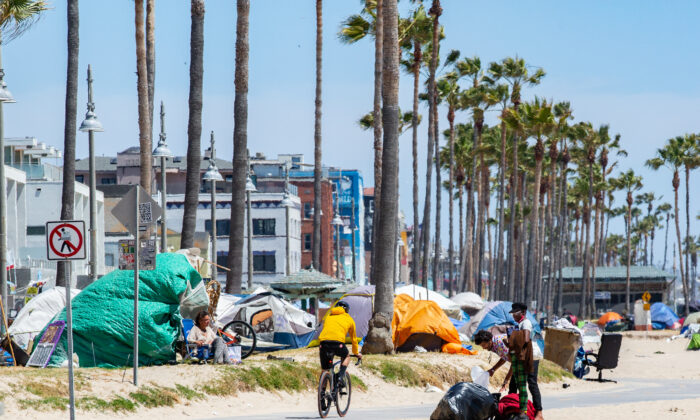 Los Angeles Homeless Moving Back Onto Street After Cleanups

This month, Los Angeles resumed its CARE Plus homeless encampment cleanups in the city. Some Angelenos welcome the cleanups, saying it improves the quality and safety of their neighborhoods, while others are concerned about the unhoused who are left scrambling after their belongings are often completely thrown out by the city.

Earlier this year, the city council voted to resume the cleanups, which require the homeless to take down their tents so the Los Angeles Sanitation Department can sweep and wash the streets and remove trash and waste from the area, beginning on Sept. 1.

Peggy Lee Kennedy of Venice Justice and Service Not Sweeps told The Epoch Times previously that the CARE Plus cleanup crews put aside some of the people’s belongings in bins, but that other belongings are often destroyed by the crew.

“The [cleanup crew] put the police tape up, and they really just went at it and started destroying everything with very minimal going through belongings,” Kennedy said. “They had, I guess for these four blue tubs that they stored people’s belongings in, but [everyone’s belongings were mixed up]. And a front loader was pushing things and sort of crushing them, and then a crane picked everything up and threw it in the trash truck—full tents and everything.”

Julian von Loesch, founder of activist organization Sidewalk Society, decided to rent a U-Haul truck to help the unhoused store their larger belongings during the encampment cleanups. On Sept. 16, photojournalist Fabian Lewkowicz posted a video of von Loesch helping a homeless person unpack their things from the U-Haul truck after an encampment cleanup on Hampton Drive in Los Angeles.

Lewkowitz told The Epoch Times that he saw von Loesch help people in the encampment load up their belongings into the U-Haul earlier that day before the city’s scheduled CARE Plus cleanup. After the cleanup, von Loesch and others helped people unpack their belongings.

In the video, von Loesch said that part of what he’s trying to do is help people in encampments downsize.

“A lot of people have lost a lot of stuff,” von Loesch said. “I want to transition people slowly. So what we’re trying to do is we’re trying to reduce this as much as possible … smaller tents less stuff, less clutter … The problem is, people have too much stuff, so it looks ugly.”

Von Loesch said his organization was trying to “help people raise money for nice tents and [have] less stuff.”

“So far what’s happening is a lot of money is being spent on the cleanups but like three hours later, the same [expletive] is there again,” he said. “So, slowly, we’re gonna raise money so we can get people whatever they need, housing, and save [lots of] dollars in taxpayer money.”

The video led to outrage among some Venice Beach residents who expressed frustration that the encampments just returned after the cleanups—with some calling it “illegal dumping.”

“[Von Loesch] isn’t helping anyone by moving them on the sidewalk. He is actually setting them up for their slow demise, especially if he is moving them into one of these large encampments,” resident James Baum commented on the video, which was also posted on the Venice Community Facebook page.

“He is moving items onto a sidewalk in an encampment, which is technically illegal dumping. He says he is trying to make it so there is less clutter but in reality, he is doing the exact opposite.”

Resident Rick Swinger, who advocates against illegal dumping in Los Angeles, said on his Facebook page, Stop Illegal Dumping, that von Loesch was “ignoring the facts that unregulated camping leads to pollution, rodent infestation, diseases and used bloody needles on our beach putting everybody in harm’s way especially our children playing in the sand.”

Silicia Sol Slade Jensen, an unhoused Venice resident, told the Epoch Times that she disagreed with the way the cleanups were being handled and said she thought it showed a double standard for homeless people.

“You can’t allow anyone to get comfortable in a space for over a year in some places, and then all of a sudden give less than 48 hours’ notice that things are going back to pre-pandemic and expect people not to be displaced,” Jensen said. “It’s cruel, unusual and if it were done to someone housed, there’d be attorneys from here to kingdom come suing the city. But because we’re looked at as less than citizens it’s ok? No, it’s not. It’s dependent’s abuse.”

Van Loesch didn’t respond to a request for comment by press time.