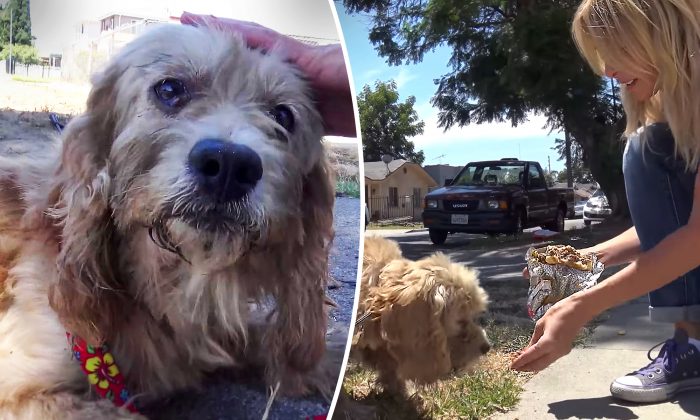 Los Angeles is a tough place to survive on the streets. This sprawling city is home to thousands of homeless dogs that survive because of the mild climate but often don’t get the care they need because of their massive numbers and lack of shelter facilities.

But the organization Hope for Paws, founded by Israeli-American rescuer Eldad Hagar in 2008, doesn’t give up on any homeless or abandoned dogs no matter how desperate their condition. The group wanted to show its supporters and dog lovers everywhere just how difficult it is to save these dogs and began filming their rescues to share.

A heartbreaking video of a cocker spaniel starving to death rescued by Hope for Paws shows just how much time and effort goes into each and every rescue.

Hope for Paws had received a call from people in the neighborhood about a stray cocker spaniel living underneath a house on the block. As Hagar explained on Facebook, “We rushed over to save him from this rough neighborhood.” Despite clearly being very hungry, this dog had never had many good interactions with humans, as he cowered and fled at the slightest approach.

When Hagar and a volunteer, Lisa Arturo, showed up at the house, the dog immediately ran away and tried to hide behind garbage and recycling bins. After a tip from the resident of the home where the dog had been hiding, Arturo tried to get closer to him.

Armed only with a cheeseburger and a dog snare, the rescuers tried to get the dog to come close enough toward them. With a “funneling” strategy, they coaxed him into the corner, and Hagar managed to deftly catch the dog with the snare as he fled, all the while keeping the camera going.

While Hagar tried to reassure the dog with a calm, friendly tone of voice, Arturo’s job was to break the cheeseburger into little bits and feed the spaniel to gain his trust. His reaction, to voraciously snap them up and swallow them without so much a chew, showed just how hungry this poor pup was.

As Hagar wrote on Facebook, “Usually a dog under such extreme stress refuses to accept food once captured, but this was not the case with Amos … he was so hungry!!”

Once they had established some rapport by feeding him, the next step for Arturo was to try petting him and earn his trust. While feeding him, she reached over and tried to gently pet the dog.

Finally, she managed to slip a collar over him and get him to walk to the car with them. They had the dog’s trust and Arturo decided to name him Amos. While he was clearly very scared, they immediately saw how sweet he was.

A trip to the vet revealed that Amos was covered with fleas and suffering from “cherry eye,” what PetMD describes as “a pink mass protruding from the animal’s eyelid,” which required surgery. Amos also needed to be neutered to be sure he didn’t unknowingly make a contribution to the stray problem.

They managed to find a foster home for the sweet boy, whom the vet estimated to be between 6 and 7 years old, and with lots of love and attention (and much-needed food), he underwent a total transformation of the heart, allowing his loving nature to shine through.

And best of all, Amos didn’t just find a foster family; after over 1.5 million people saw his rescue video, he was adopted by the Davis family, who renamed him Miles Marie Davis after the great jazz trumpeter, with his middle name coming from his forever mom. A heartwarming ending for a dog who will never be without a home or a square meal again.