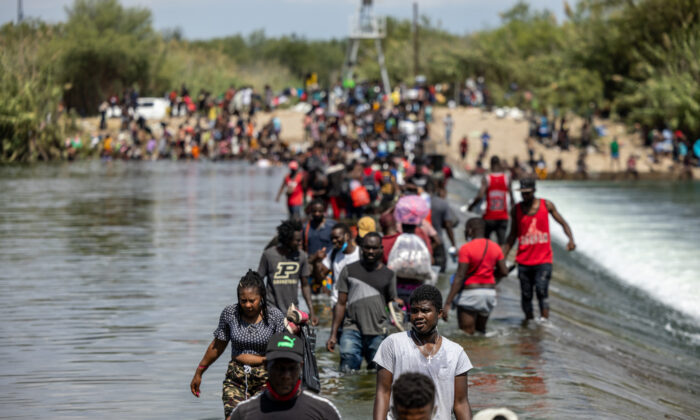 The Department of Homeland security requested the assistance of the U.S. military to transport illegal immigrants, many of Haitian origin, from a crowded holding area under a bridge in Del Rio, Texas.

The Department of Defense (DOD) confirmed the request during a press briefing on Monday.

Under this request, the department would provide contracted air transportation for Customs and Border Patrol on a reimbursable basis,” DOD press secretary John Kirby told reporters at the Pentagon.

The requested support would end on Oct. 20 and can be given with “minimal risk” to current military operations, Kirby said before declining to offer further details because the request “really has just come in.”

“We’re doing the same thing we would do with any Request for Assistance. We’re examining, reviewing, and determining the best way forward,” Kirby said.

Some of the thousands of illegal immigrants who have amassed in Del Rio began returning to Mexico on Monday to pick up supplies or to avoid being deported back to their home countries.

Haitians and others were witnessed on Monday crossing the Rio Grande to enter Acuña, Mexico, as they consider their options following a U.S. crackdown on the illegal immigrant camp under the International Bridge just north of the border in Del Rio, Texas.

The Del Rio area has become the epicenter of the Biden administration’s border crisis. The congregation of nearly 10,000 illegal aliens next to and under the bridge became a visual symbol for the more than 1.2 million illegal aliens apprehended at the border this year.

Homeland Security Secretary Alejandro Mayorkas traveled to Del Rio on Monday to get an on-the-ground operational update and see firsthand the huge, litter-ridden camp that has sprung up under the International Bridge.

Mayorkas said the surge in immigrants was “rather sudden” and “rather dramatic,” prompting a large-scale DHS response that has included moving some 6,500 immigrants to other parts of the border to ease the burden on the overtaxed agents in the Del Rio Border sector. Some 400 agents and officers were sent to the sector, in some cases at the expense of leaving other highly trafficked sections of the border unprotected.

The Department of Homeland Security conducted three repatriation flights to Port-au-Prince, Haiti, from Del Rio on Sunday, returning 327 Haitian nationals to their home country. DHS expects to conduct one to three such flights per day for a while and is attempting to secure additional planes to carry out more flights.