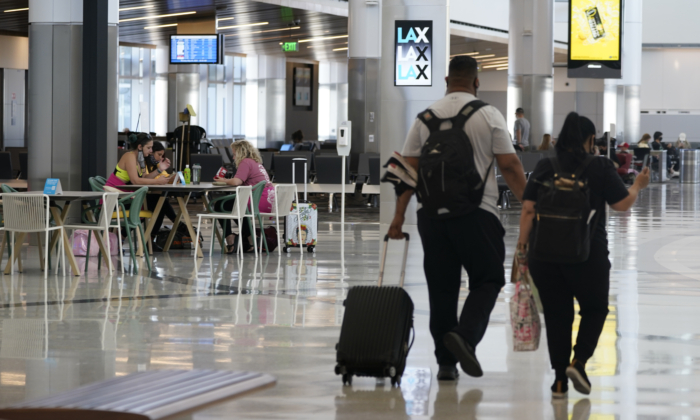 LOS ANGELES—Up to 2 million people are expected to pass through Los Angeles International Airport during the two-week Thanksgiving holiday period that begins today, potentially doubling the number from the same time last year.

In a statement, airport officials said they expect the Thanksgiving holiday travel period, which begins Thursday and continues through Nov. 30, to be its busiest stretch of passenger traffic since early 2020.

The busiest days are expected to be Friday, and the Sunday after Thanksgiving, Nov. 28.

One of LAX’s new recommendations this year is for passengers to pre-book parking at parking.flylax.com. Passengers are also urged to use the new LAX Economy Parking facility with a dedicated shuttle to and from the CentralTerminal Area. Also, the FlyAway bus has added trips from Van Nuys and Union Station.

Travelers should check ahead for parking availability and drive times by following @FlyLAXStats on Twitter.

—Rapid COVID-19 tests are available at an on-site testing center across from Terminal 6, inside the Tom Bradley International Terminal along Aisle C, and near the information booth on the Lower/Arrivals Level of Terminal 2.

—Wear a face covering at all times, as required by the federal government.

The American Automobile Association (AAA) of Southern California recently estimated that pandemic-weary Angelenos will be hitting the roads and airways in large numbers for the Thanksgiving weekend, with about 4.4 million Southern California residents expected to travel. The anticipated number of holiday travelers marks a 16 percent jump from last year.

According to the Auto Club, this year will be the second-busiest Thanksgiving travel volume on record for the region, just 3 percent below the 4.5 million people who traveled for Thanksgiving in 2019.

“This is a remarkable comeback for travel, especially considering that cruises and some other modes of transportation have only recently restarted,” Filomena Andre, the Auto Club’s vice president for travel products and services, said in a statement. “To help meet consumer demand, AAA is hiring travel advisers. We are also strongly recommending that people not wait to book trips in 2022 because there are deals and availability that are being offered now that will go fast.”

According to the Auto Club, the top five destinations for Southern California Thanksgiving travelers will be San Diego, Las Vegas, the Grand Canyon, Yosemite, and Santa Barbara.

Nationally, Anaheim is expected to be the second-most popular holiday destination for travelers, thanks to Disneyland. Anaheim will be second only to another Disney hub—Orlando, Florida.

Nationwide, the Auto Club is predicting this Thanksgiving will be the third busiest on record, with 53.4 million travelers, trailing only behind the 56 million from 2019 and 53.7 million in 2018.

Of the 4.4 million anticipated Southern California travelers over Thanksgiving weekend, 3.8 million are expected to travel by car, while 494,000 will travel by air, and 79,000 will use some other means, such as a bus or cruise ship.