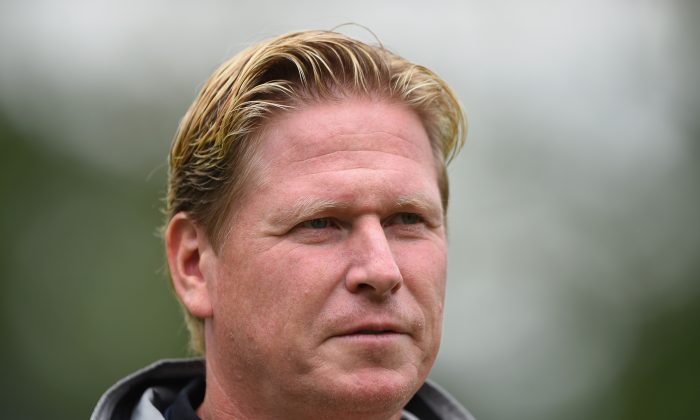 Markus Gisdol, head coach of Hoffenheim looks on during the DFB Pokal first round match between USC Paloma and 1899 Hoffenheim on August 17, 2014 in Hamburg, Germany. (Photo by Stuart Franklin/Bongarts/Getty Images)
Europe

Hoffenheim and Augsburg are set to play in a Bundesliga match on Saturday, August 23.

The game will be broadcast on Sky Bundesliga 6/HD and Sport1.FM in Germany.

Hoffenheim are 1/1 to take the match, while Augsburg are 29/10 to win the contest, according to OddsChecker.

FRANKFURT, Germany (AP) — Bayern Munich kicks off the defense of its Bundesliga title on Friday against revamped Wolfsburg with fans hoping for a thrilling season after Germany’s triumph at the World Cup in Brazil.

For that to happen, however, Bayern will have to lose some of its dominance. Bayern became the earliest ever champion in March and finished 19 points ahead of Borussia Dortmund. The previous season, it beat Dortmund to the title by a 25-point margin. The two clubs are expected again to be the main rivals for the championship. Dortmund won the dress rehearsal, beating an injury-hit Bayern 2-0 in the German Super Cup two weeks ago.

Here are five things to know ahead of the opening round:

THE CLUB TO BEAT: Still Bayern. Pep Guardiola’s team has enough talent to deal with the problems it faces going into the season. Some key players are out with long-term injuries, such as Javi Martinez, Thiago Alcantara and Rafinha. Bastian Schweinsteiger is nursing a knee injury and won’t return for weeks, while Franck Ribery will also miss the season opener.

Guardiola expects a difficult start to the season also because of recovery time for his World Cup winners. Six of his payers lined up for Germany and Arjen Robben also played until the end for third-place Netherlands. Bayern, which usually has the most German internationals, has always struggled after a World Cup and has never won the title after a world championship victory. Bayern is seeking to three-peat for the third time. Borussia Moenchengladbach is the only other club to have won three straight league titles, in the 1970s.

Robert Lewandoski will more than compensate for the loss of striker Mario Mandzukic but the departure of midfielder Toni Kroos may leave a bigger gap.

THE CHALLENGER: Borussia Dortmund still looks like Bayern’s biggest challenger, despite the departure of Lewandowski, the Bundesliga’s top scorer last season. Forward Marco Reus and defender Neven Subotic are returning from injury just in time and coach Juergen Klopp has some new players.

Ciro Immobile, top scorer in Italy last season, and the experienced Adrian Ramos, previously of Hertha Berlin, have been signed to fill the void left by Lewandowski. Defender Matthias Ginter, a member of Germany’s World Cup squad, was brought in from Freiburg. The speedy forward Pierre-Emerick Aubameyang has been impressive in preseason games. Dortmund won 3-0 in Munich last season but lost the German Cup final to Bayern.

THE CLUB TO WATCH: Bayer Leverkusen. Fourth last season, Leverkusen has a new coach, Roger Schmidt, with a reputation for favoring attacking football. The club has also added depth to its squad.

Midfielder Hakan Calhanoglu, considered one of the most promising playmakers in the league, has been brought in from Hamburger SV, along with Croatia’s talented teenager Tin Jedvaj.

Veteran Stefan Kiessling remains one of the Bundesliga’s top strikers. He scored five of Leverkusen’s six goals in a German Cup victory over low-tier opposition.

THE CLUBS THAT HAVE TO WATCH OUT: Paderborn was the 53rd club to gain promotion to the Bundesliga. With the smallest stadium and the smallest budget, it is not expected to remain there for more than one season. Built on team spirit and with no stars, it is hard to see Paderborn winning more than a few games.

Mainz finished seventh last season but was knocked out of qualifying for the Europa League and then lost in the first round of the German Cup. The surprise departure of coach Thomas Tuchel has left a huge void and his Danish successor Kasper Hjulmand is hardly known in Germany and could be in a for a rough ride.

Cologne is back in in the top division and could stay there under the calm guidance of Austrian coach Peter Stoeger and a competent management for the first time in years. Hamburg barely escaped relegation and went on a shopping spree, signing half a dozen new players. Freiburg may run out of escape acts as it continues to lose top players.

FUN TO WATCH: Hoffenheim provided some of the most entertaining football last season, recalling its glorious debut in the Bundesliga. The attacking style produced 72 goals — but the defense allowed 70. Coach Markus Gisdol has been working on making the defense less generous, while the club signed goalkeeper Oliver Baumann from Freiburg, Switzerland midfielder Pirmin Schwegler and striker Adam Szalai from Schalke, and retained playmaker Roberto Firmino. Striker Kevin Volland nearly made Germany’s World Cup squad and Hoffenheim has a talented pool of junior payers.