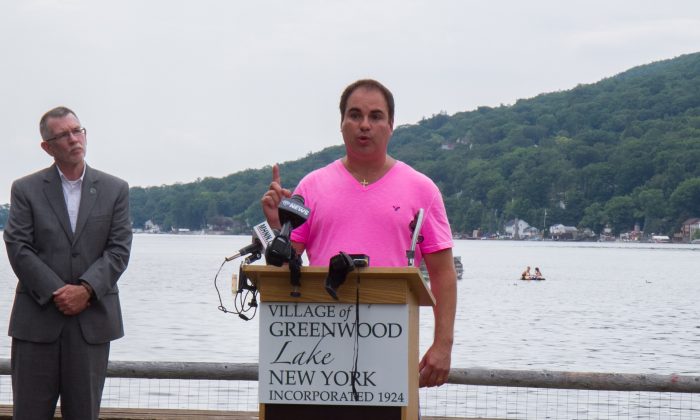 GREENWOOD LAKE—After the Hoboken International Film Festival (HIFF) failed to reach a deal with the City of Middletown, it is now taking up residence in Greenwood Lake, a village in the Town of Warwick.

The Festival’s chairman, Kenneth Del Vecchio, said it was his first choice when he started looking at places earlier this month, citing the waterfront’s appeal, it’s proximity to his home in Warwick, which he called the “capital of the artistic community in Orange County,” and the mayor, who he called an “innovative, young guy.”

“This is the ultimate destination location in Orange County,” he said at a press conference on July 25 to announce the festival’s new location.

The seven-day festival will be held sometime in mid-to-late May at Thomas P. Morahan Waterfront Park and at another undetermined location in the village, Del Vecchio said.

The screenings in the park will be outdoors next to the beach, and in case of inclement weather, organizers say a large tent will provide cover.

“To be able to come to a location like this, where you can potentially go on a beach and go swimming while you’re watching a movie, or you can go boating, you can go jet-skiiing … sure it’s great for the community, but it’s also great for my filmgoers,” Del Vecchio said.

Having the festival on the water harkens back to when part of it was in Frank Sinatra Park in Hoboken on the bank of the Hudson River, Del Vecchio said.

Superstorm Sandy ruined the indoor venue where the festival was being held in New Jersey, so in 2013 it started looking for a new home.

Del Vecchio, a writer, actor, and film producer, was filming at the Paramount Theatre in Middletown at the time, when he decided to bring the festival there.

“One of the benefits that the host community gets is that I shoot throughout the community,” Del Vecchio said.

“I’ve shot pieces of my last nine or 10 movies … in Middletown. Now there’ll be tons in Greenwood Lake.”

Part of the reason that Del Vecchio failed to renew a three-year contract with the City of Middletown is the size of the sponsorship fee he was asking for.

Greenwood Lake has agreed to the first proposal Del Vecchio gave to Middletown, he said.

For the village, it will all come back in tourism dollars, Mayor Jesse Dwyer said, and he negotiated it to come at a time when the village doesn’t see a lot of tourists.

“We have dependable foot traffic, but we need more,” Dwyer said. “What this will provide is a steady, seven-day festival these businesses can rely on.”

While Del Vecchio was pleased with the deal he made with the village, “it’s not all about the dollars and cents,” he said.

Hinting at strained relations with the democratic leadership in Middletown, Del Vecchio, a strong Donald Trump supporter who ran for Congress on the Republican ticket this summer, said it was the leadership of the village and Orange County that finally brought him there. He cited the mayor and the county executive, both republicans, as reasons why he chose Greenwood Lake.

“It starts with people, it starts with leaders of communities,” he said.”I feel so thankful to be able to walk into an opportunity where I have people who are like-minded in their vision of success for their own communities.”

On July 26, this article was updated with the correct numbers for the proposal originally pitched to Middletown for the sponsorship fee from 2017–2019. Epoch Times regrets the error.